AG Barr: Epstein's death was a 'perfect storm of screw-ups' 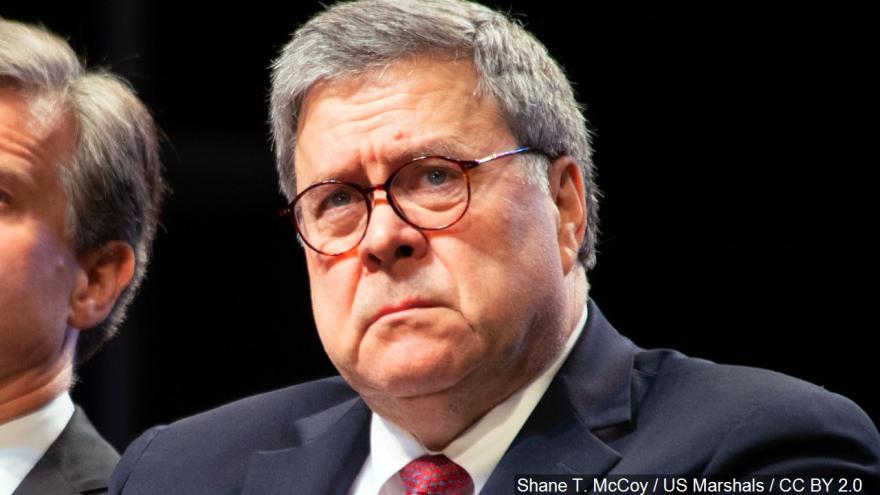 ABOARD A US GOVERNMENT AIRCRAFT (AP) — Attorney General William Barr said he initially had his own suspicions about financier Jeffrey Epstein's death while behind bars at one of the most secure jails in America but came to conclude that his suicide was the result of "a perfect storm of screw-ups."

In an interview with The Associated Press, Barr said his concerns were prompted by the numerous irregularities at the Manhattan jail where Epstein was being held. But he said after the FBI and the Justice Department's inspector general continued to investigate, he realized there were a "series" of mistakes made that gave Epstein the chance to take his own life.

"I can understand people who immediately, whose minds went to sort of the worst-case scenario because it was a perfect storm of screw-ups," Barr told the AP as he flew to Montana for an event.

Barr's comments come days after two correctional officers who were responsible for guarding the wealthy financier when he died were charged with falsifying prison records. Officers Tova Noel and Michael Thomas are accused of sleeping and browsing the internet — shopping for furniture and motorcycles — instead of watching Epstein, who was supposed to be checked on every 30 minutes.

Epstein took his own life in August while awaiting trial on charges he sexually abused girls as young as 14 and young women in New York and Florida in the early 2000s.

His death cast a spotlight on the federal Bureau of Prisons, which has been plagued by chronic staffing shortages and outbreaks of violence. The indictment unsealed this week against the officers shows a damning glimpse of safety lapses inside a high-security unit at the Metropolitan Correctional Center in New York.

But the indictment also provided new details that reinforce the idea that, for all the intrigue regarding Epstein and his connections to powerful people, his death was a suicide — as the city's medical examiner concluded — and possibly preventable.

A lawyer for Thomas, Montell Figgins, said both guards are being "scapegoated."

The attorney general also sought to dampen conspiracy theories by people who have questioned whether Epstein really took his own life, saying the evidence proves Epstein killed himself. He added that he personally reviewed security footage that confirmed that no one entered the area where Epstein was housed on the night he died.

Epstein was placed on suicide watch after he was found July 23 on his cell floor with bruises on his neck but was taken off the heightened watch about a week before his death — meaning he was less closely monitored but still supposed to be checked on every 30 minutes. He was required to have a cellmate, but he was left with none after his cellmate was transferred out of the MCC on Aug. 9, the day before his death, the indictment said.

Epstein was found unresponsive in his cell when the guards went to deliver breakfast. One of the guards told a supervisor then that they hadn't done either their 3 a.m. or 5 a.m. rounds, according to the indictment.

The Justice Department is still investigating the circumstances that led to Epstein's death, including why he wasn't given a cellmate.

"I think it was important to have a roommate in there with him and we're looking into why that wasn't done, and I think every indication is that was a screw-up," Barr said. "The systems to assure that was done were not followed."

Epstein's death ended the possibility of a trial that would have involved prominent figures and sparked widespread anger that he wouldn't have to answer for the allegations.

Even with his death, federal prosecutors in New York have continued to investigate the allegations against Epstein. Barr, who has vowed to aggressively investigate and bring charges against anyone who may have helped Epstein, said investigators were making good progress in the case.

"They are definitely pushing things along," Barr said. "I'll just say there is good progress being made, and I'm hopeful in a relatively short time there will be tangible results."