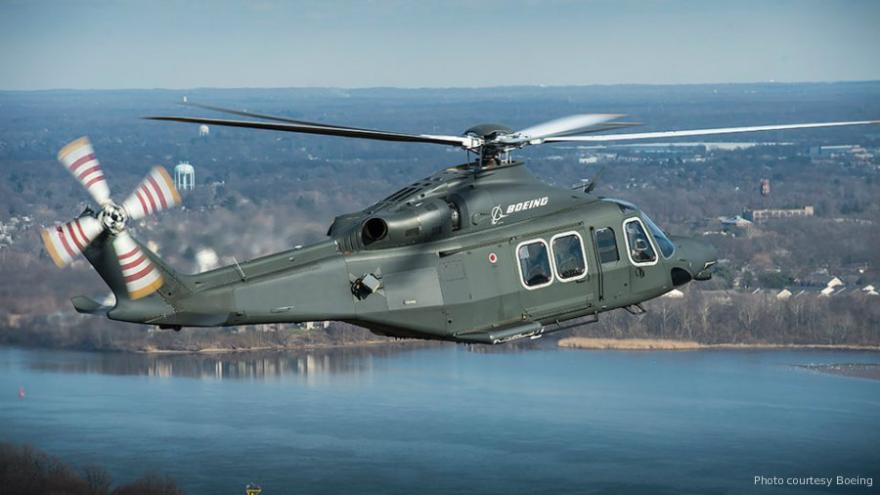 (CNN) -- The US Air Force has awarded a $2.38 billion contract to Boeing for new helicopters as part of an effort to replace the Vietnam-era "Hueys" that have been helping to secure America's nuclear missile sites.

"The new helicopter will be an important tool for Airmen charged with securing and defending the nation's intercontinental ballistic missiles," the Air Force said in a statement Monday announcing the awarding of the first portion of the contract.

The MH-139 is a military version of the Leonardo AW139 helicopter and will be the product of a joint effort between Boeing and Leonardo and the MH-139s will be manufactured in Philadelphia, Pennsylvania.

"We're grateful for the Air Force's confidence in our MH-139 team," David Koopersmith, the vice president and general manager for Boeing Vertical Lift said in a statement.

The first delivery of an operational helicopter is expected in Fiscal Year 2021 according to the Air Force.

The replacement of the Vietnam-era Hueys which first entered Air Force service in 1970 has been a focus of members of Congress from Montana, Wyoming and North Dakota, states where US missile sites are located.

In March, six US senators wrote a letter to the Air Force Secretary Heather Wilson urging the Air Force to expedite the acquisition of a replacement helicopter.

"At a time when our nation is upgrading our nuclear arsenal due to increased global threats and near peer adversaries, we cannot afford to continue delaying additional capabilities to secure our ICBM fields," they wrote.