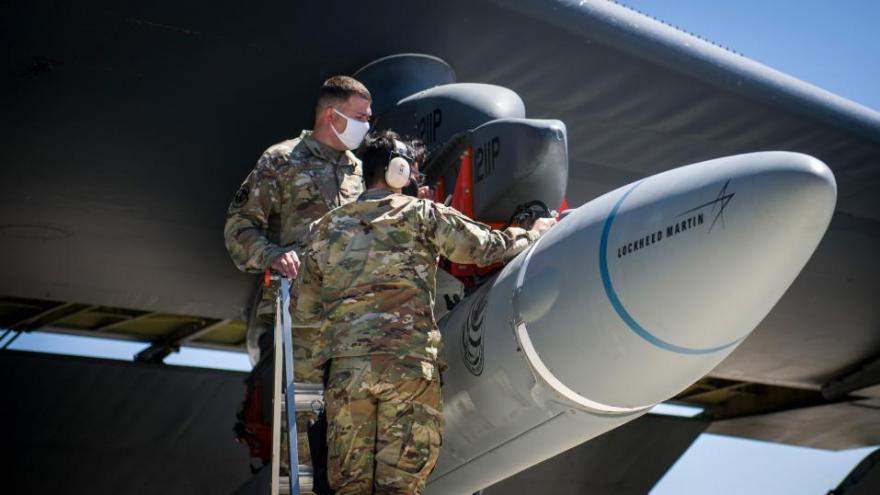 Master Sgt. John Malloy and Staff Sgt. Jacob Puente, both from 912th Aircraft Maintenance Squadron, secure the AGM-183A Air-launched Rapid Response Weapon Instrumented Measurement Vehicle 2 as it is loaded under the wing of a B-52H Stratofortress at Edwards Air Force Base, California, Aug. 6.

(CNN) -- The Air Force delayed its hypersonic missile program by up to a year after "recent flight test anomalies" pushed back the schedule for the weapon's completion, according to a statement from the Air Force.

The AGM-183 Air-Launched Rapid Response Weapon (ARRW) was supposed to reach early operational capability, an important milestone in weapon testing and development, before October. But following a series of failures in flight tests last year, the Air Force postponed the first test of the complete missile and booster to sometime in the next fiscal year, which begins in October. More tests will follow later in the year, the Air Force said.

The ARRW missile, built by Lockheed Martin, is designed to destroy "high-value, time-sensitive targets," according to the Air Force. It is also supposed to enable the military to quickly strike a well-defended target on land.

The delay in the program, first reported by Bloomberg, comes as lawmakers have voiced growing frustration about the US falling behind adversaries like China and Russia in hypersonic weapons development.

At a House Armed Services Committee hearing on Wednesday, Republican Rep. Mike Rogers of Alabama warned that China has "more troops, more ships and more hypersonic missiles than the United States," while Republican Rep. Michael Turner of Ohio said the defense industrial base needs to "speed it up" on hypersonic development.

CNN reported earlier this week that the US had successfully tested a different hypersonic missile -- the Hypersonic Air-breathing Weapon Concept -- but kept quiet about the test so as not to exacerbate tensions with Russia. The test came days after Russia said it used its own hypersonic Kinzhal missile during its invasion of Ukraine.