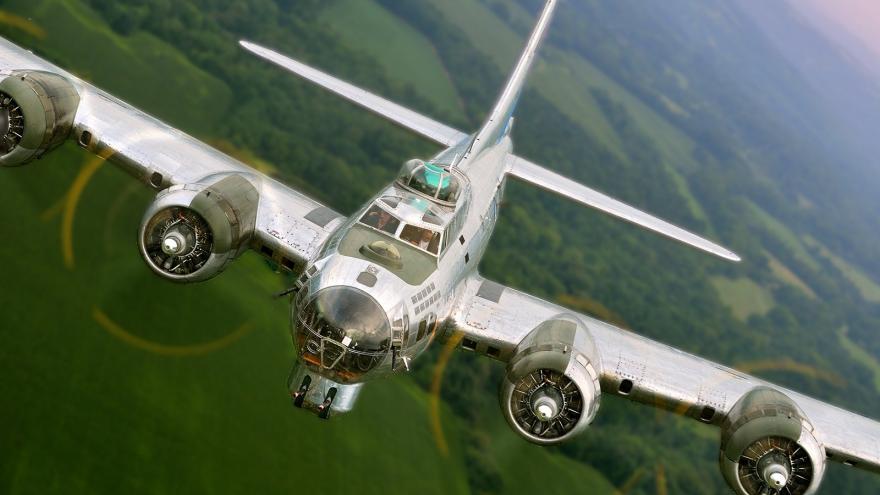 A WWII-era B-17 bomber like this one crashed Wednesday at Bradley International Airport in Connecticut while trying to land. Source: Commemorative Air Force
By Jason Hanna and Mirna Alsharif, CNN

(CNN) -- An Air National Guardsman who was aboard a World War II-era B-17 bomber that crashed in Connecticut may have helped to save some of his fellow passengers, officials said as investigators try to determine what caused the deadly wreck.

The Boeing B-17 Flying Fortress -- operated by a group that sells demonstration flights to the public -- crashed Wednesday morning as the crew tried to make an emergency landing at Bradley International Airport north of Hartford, killing seven of the 13 people aboard, officials said.

The pilots had reported an issue with the plane just minutes after takeoff from Bradley, and had circled back to try to land, according to the National Transportation Safety Board, which is investigating.

The plane, carrying three crew members and 10 passengers, struck a post while approaching the runway and veered, eventually crashing into a de-icing facility at the airport, leaving the aircraft in flames, officials said.

Six survivors were taken to hospitals. One of them was an Air National Guard member and passenger who opened a hatch in the rearof the aircraft and helped others exit, the state's National Guard said.

The airman -- the command chief for an airlift wing and a trained C-130 loadmaster -- had brought his military flame-retardant flight gloves with him on the flight, the National Guard said in a news release.

"Using these, (he) was able to open a hatch on the aircraft, allowing other passengers to egress the plane after the crash," the news release reads.

The airman, whose name wasn't released, was taken to a hospital, where he was treated for unspecified injuries and released, the National Guard said.

State official James Rovella told reporters Wednesday evening that stories were emerging "about folks that were on the plane that were able to open a hatch and assist others in leaving."

Rovella, commissioner of the state Department of Emergency Services and Public Protection, also spoke of someone who "went towards the plane and assisted folks in getting out."

He said he believed these actions saved lives, citing preliminary reports from the site.

Officials have not released the names of those who died, nor the names and conditions of the survivors.

But, of the seven who were killed, at least two have been publicly identified by those who knew them.

Robert Riddell, of Connecticut, was aboard the plane and died, his wife Debra Riddell told CNN.

Robert Riddell took photos of the plane -- inside and outside -- and posted them to social media shortly before the crash.

"It's been a long and tragic day. Words cannot express how devastated I am," she wrote. "At this point, all survivors have been identified. Rob was not one of them."

"He was brilliant, loving, funny, reliable, compassionate and the best man I've ever known. ... My heart goes out to the other people that lost loved ones but especially the people who survived this crash," the post continued.

Mazzone was a Vernon police captain from 1976 to 1998, and was an inspector with the state Division of Criminal Justice until retiring in January, Kelley said.

"He did a lot of good for the community and for the state at large," including by supporting Special Olympics Connecticut, Kelley said.

Two firefighters were aboard the plane, Simsbury Volunteer Fire Company Deputy Chief Kevin Kowalski said earlier. Kowalski would not provide names of the firefighters nor details on their conditions.

Pilot asked to return to the airport, audio indicates

The plane belonged to the Collings Foundation, a nonprofit that planned to display the B-17 and other vintage aircraft at Bradley as part of a "Wings of Freedom Tour" through Thursday. Attendees could buy various experiences aboard the planes, including demonstration flights, the foundation's website says.

This particular B-17 was accepted into service in April 1945 -- too late for World War II combat, though it was used for air-sea rescue duties, according to the Aviation Geek Club blog.

The plane took off at 9:45 a.m. ET. About five minutes later, the crew reported an issue with the plane and asked to return, NTSB member Jennifer Homendy told reporters Wednesday evening.

"N93012 would like to return to the field," one pilot told air traffic control, according to audio recorded by the website LiveATC.net.

"What is the reason for coming back?" the controller asked.

"You got No. 4 engine. We'd like to return, and blow it out," another pilot in the aircraft said.

A pilot said he needed to land immediately, and the control tower diverted other jets that were about to land, the recording indicates.

The plane hit the instrument landing system posts and veered to the right. It crossed a grassy area, then a taxiway, and ran into the de-icing facility, Homendy said.

NTSB investigators expect to issue a preliminary report about the crash in about 10 days, and finish the investigation within 18 months, Homendy said.