Airstrikes kill at least 15 during ceasefire in northwestern Syria 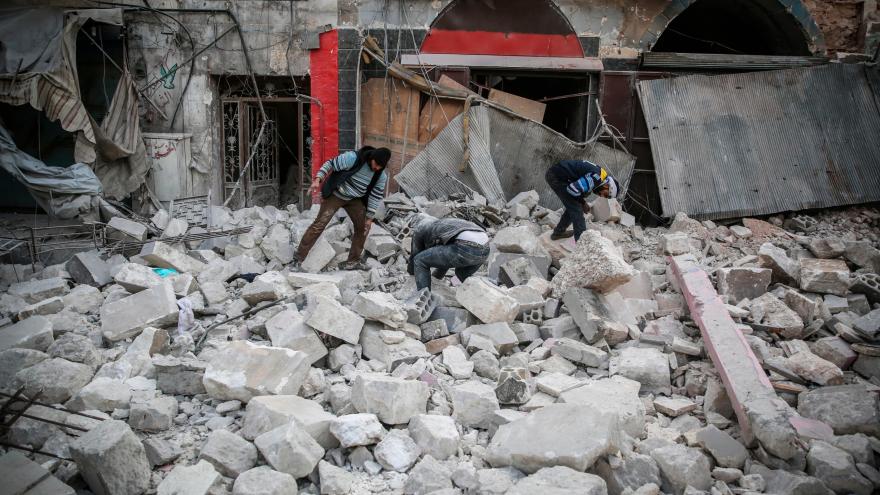 (CNN) -- More than a dozen people were killed and 60 injured in airstrikes on Wednesday in the last rebel-held area in northwest Syria, according to activists on the ground and the volunteer rescue group known as the White Helmets.

The deaths come after a ceasefire agreement in the province went into effect on January 12, according to the Turkish defense ministry. The deal was brokered by Turkey and Russia.

At least 15 people were killed in strikes on a market and the industrial zone in Idlib city, according to Idlib-based media activist Zaher Jaber. There are reports of people still buried under the rubble.

A resident of Kafra Nbel, a town close to Idlib city, said the area has been targeted twice and aircraft had been hovering overhead throughout the day on Wednesday.

"At least 5 warplanes have been targeting anything moving on the ground," said 22-year-old Mohammad Kafranbel.

The White Helmets have recorded more than a dozen violations of the ceasefire since it was announced, according to tweets from the rescue group. It said one of its members was among the dead, and accused Russia of conducting the airstrikes.

"Russia proves again its disrespect to any ceasefire in Syria, and that the recent agreement with Turkey, in its fourth day, is nothing but a repetitive scenario of similar failing agreements" it said in a statement to CNN.

"With continuing the artillery and aerial bombardment by Russia, the ceasefire has come to an end" it said, adding that that the towns of Maarat Al Nouman, Kafra Nbel and Ariha were also targeted by the strikes.

The Russian Defense Ministry did not respond to a request for comment.

In recent months, Syrian President Bashar al-Assad's army, with support from Russian air power, has stepped up its attacks on the northwestern province -- the country's last major opposition bastion and home to more than 3 million Syrians.

The government has said that it is targeting terrorists in Idlib. But if the violence continues, hundreds of thousands of civilians could be displaced in the coming weeks, international aid organizations warned in December.