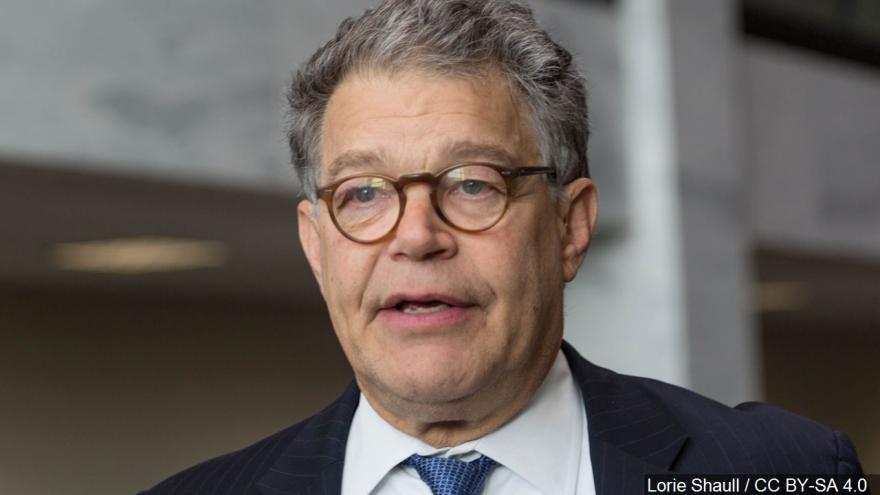 (CNN) -- Democratic Sen. Al Franken of Minnesota is resigning following allegations that he touched women inappropriately, he announced on the Senate floor Thursday.

"I am announcing that in the coming weeks I will be resigning as a member of the United States Senate," Franken said in an emotional address in which he said some of the allegations against him weren't true.

The resignation brings a sudden and dishonorable end to the unlikely political career of the comedian-turned-progressive darling, first known to most Americans for his work on "Saturday Night Live."

Franken, who did not apologize during his speech, also called out President Donald Trump, who was repeatedly accused of sexual assault during his presidential campaign, and Alabama Senate candidate Roy Moore, who faces accusations that he pursued relationships with teenagers and committed sexual assault while he was in his 30s.

"I, of all people, am aware that there is some irony in the fact that I am leaving while a man who has bragged on tape about his history of sexual assault sits in the Oval Office and a man who has repeatedly preyed on young girls campaigns for the Senate with the full support of his party," Franken said.

More than 20 Democrats, including many who publicly called on Franken to resign Wednesday, were in the chamber to hear his speech, which lasted about 12 minutes. Republican Sen. Jeff Flake of Arizona, who has announced he would not seek reelection next year, also listened to his remarks. Following its conclusion, the Democrats in attendance hugged Franken. Sens. Tammy Duckworth of Illinois and Claire McCaskill of Missouri, two Democrats who called for Franken to resign, were both seen wiping their eyes.

"Events have unfolded quickly; thus, I have not yet decided on my appointment to fill this upcoming vacancy. I expect to make and announce my decision in the next couple of days," Dayton said in a statement.

Lindsay Menz, the woman who first told CNN that Franken groped her buttocks at a Minnesota State Fair in 2010, told CNN she was "a little disappointed" by Franken's statement on the Senate floor.

On Franken's statement that some of the allegations are "simply not true," Menz said she wonders if he was talking about her. "I just feel bad that this is our culture," she said. "I feel bad that we've allowed men to behave this way."

Menz said she watched his entire speech on CNN. She said she feels badly that he is resigning: "I feel sad that he has to leave a job he's passionate about."

The push for Franken's resignation started after a woman came forward last month to say he had badgered her into an unwanted kiss before he was a senator and groped her while she slept.

That allegation set forth weeks of open deliberation about the political future of the unlikely comedian turned progressive darling.

Last month, Leeann Tweeden, a morning news anchor on the AM radio station KABC in Los Angeles, posted her story on the station's website, saying Franken forcibly kissed her and groped her in 2006 during a USO tour.

"The first thing I want to do is apologize: to Leeann, to everyone else who was part of that tour, to everyone who has worked for me, to everyone I represent, and to everyone who counts on me to be an ally and supporter and champion of women. There's more I want to say, but the first and most important thing—and if it's the only thing you care to hear, that's fine -- is: I'm sorry," Franken said in the email statement.

As condemnation increased in the wake of the story, Senate Majority Leader Mitch McConnell, R-Kentucky, called for a Senate Ethics Committee probe into Franken, and Franken said repeatedly he would cooperate with that investigation.

But in the coming days and weeks, more accusers have come forward.

A woman came forward to CNN to say Franken, as a senator, grabbed her buttocks while taking a photo at the Minnesota State Fair in 2010.

The Huffington Post reported two more women accused Franken of inappropriately touching them in 2007 and 2008.

Franken went on to speak with media outlets in his home state of Minnesota, saying he was "embarrassed and ashamed," but hoped to regain the trust of those he let down.

An Army veteran told CNN later that Franken groped her on a USO tour as well before he was a senator. The woman, Stephanie Kemplin, said Franken cupped her breast while she was deployed in the Middle East during the Iraq War.

After Kemplin came forward, a spokesman for Senate Minority Leader Chuck Schumer said the Democratic leader would not comment on the allegation against one of his fellow Democrats.

Then on Wednesday, Politico reported a former Democratic congressional aide said Franken tried to kiss her forcibly in 2006. CNN has not yet verified the claims in the Politico story, but Franken flatly denied the allegations int he report.

Shortly after, New York Democratic Sen. Kirsten Gillibrand called for Franken to resign, and other Democratic senators posted statements in swift succession. In the span of a few hours Wednesday afternoon, dozens of senators said Franken should go -- including Schumer.

Franken made his start as a comedy writer in New York, contributing to NBC's "Saturday Night Live" as a writer from its opening years in the 1970s to the 1990s. He made his way occasionally from the writers' room to the stage, gaining national exposure.

As the years went on, Franken shifted from politically charged comedy and satire to politics outright, becoming a liberal voice on radio and releasing books attacking Republicans and right-wing media.

In some of his books, Franken proposed -- somewhat tongue in cheek -- that he would have a political life, maybe as a senator or even president.

In the 2008 election, Franken turned the idea into a reality and challenged Minnesota Republican Sen. Norm Coleman.

The 2008 elections saw Democrats around the nation ascendant, and as Barack Obama won the presidential election, Franken and Coleman were neck-and-neck. After a recount, Franken was ahead, and after ensuing legal challenges from Coleman, Franken emerged victorious and joined the Senate, giving the Democratic caucus a brief supermajority.

Franken hewed liberal on most issues and was a reliable Obama supporter through the years. He has been an outspoken critic of President Donald Trump, and he drew plaudits from many in his party for his sharp questioning of Attorney General Jeff Sessions during Senate Judiciary Committee hearings.

In the wake of Trump's stunning 2016 victory and the general disrepair of the Democratic Party, Franken's name even made its way to some discussions about potential 2020 candidates to challenge Trump for the presidency.