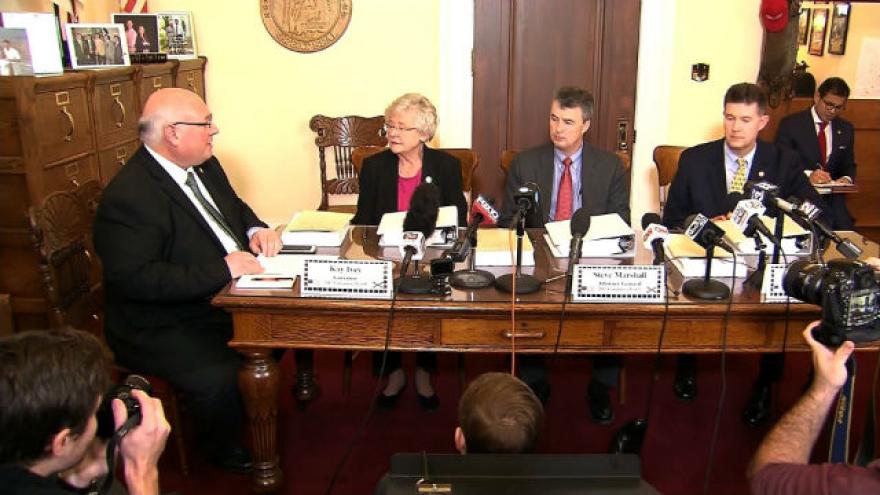 Moore had refused to concede in the wake of the election result, and on Wednesday, he had set off a new swirl of controversy by filing an election complaint alleging voter fraud may have occurred, calling for a delay in the certification of the results that declared Jones officially the winner and asking for "a new special election."

Alabama Circuit Judge Johnny Hardwick, however, denied Moore's attempt Thursday afternoon just as the certification was due to take place.

The vote totals released by the state showed Jones won by more than 21,000 votes, for a margin over Moore of about 1.6 percentage points. Almost 23,000 votes were write-ins, totaling just shy of 1.7% of the vote share.

Moore issued a statement on Thursday after the certification, calling the election "fraudulent" and slamming the "Washington establishment."

"Election fraud experts across the country have agreed that this was a fraudulent election," Moore wrote. "... I've had to fight not only the Democrats but also the Republican Senate Leadership Fund and over $50 million in opposition spending from the Washington establishment. I have stood for the truth about God and the Constitution for the people of Alabama."

On Thursday morning in response to Moore's complaint, Alabama Secretary of State John Merrill had made clear Jones' victory would be certified despite the last-minute action.

"Will this affect anything?" Merrill said on CNN's "New Day" Thursday morning, referring to Moore's challenge. "The short answer to that is no."

In a statement Thursday, Jones said he was "looking forward to going to work" in the new year.

"As I said on election night, our victory marks a new chapter for our state and the nation," he continued. "I will be an independent voice and work to find common ground with my colleagues on both sides of the aisle to get Washington back on track and fight to make our country a better place for all."

Shortly before Alabama was set to certify Jones' victory over Moore, the Republican's spokeswoman railed against the process and emphatically stood by the expertise undergirding the campaign's complaint.

"If they can steal the election from Roy Moore, Governor Ivey, they can steal it from you, or Secretary of State Merrill, it can happen to you," said Moore spokeswoman Janet Porter in an interview with CNN's Dana Bash.

One of the people cited in the Moore campaign's complaint is James Condit Jr., who also posts about JFK conspiracy theories and the murder of DNC staffer, Seth Rich, and, according to The Washington Post, has referred to "Zionist" control of world politics.

Confronted with some of Condit's background, Porter insisted he was nevertheless "an expert on voting machines."

"Maybe he got a parking ticket yesterday. That's irrelevant to the case," Porter said. "If you want to question, you know, whether he's a Zionist or not, I am. I'm pro-Israel. I'm glad the embassy is in Jerusalem by the way. Good job, President Trump."

As for Trump's lack of support for their effort, Porter turned to Trump's own claims -- presented without evidence -- that massive voter fraud cost him the popular vote in the 2016 election.

Jones defeated Moore in the special election to fill the Senate seat vacated when President Donald Trump appointed Alabama's own Jeff Sessions to be attorney general. The ensuing election drew national attention, thanks in large part to the controversial candidacy of Moore, a Republican former judge with a history of incendiary comments and controversial actions. He ran a campaign largely targeting his party's leadership and drew support from former White House chief strategist Steve Bannon.

Several women came forward alleging sexual assault and harassment by Moore in the past as the campaign progressed. Some of the allegations included saying Moore had sexually abused teenage girls. Trump, who initially supported Alabama Republican Sen. Luther Strange but endorsed Moore following the primary, reaffirmed his support in the wake of the allegations against Moore.

Moore denied all allegations, and his campaign doubled down on some of his more controversial positions.