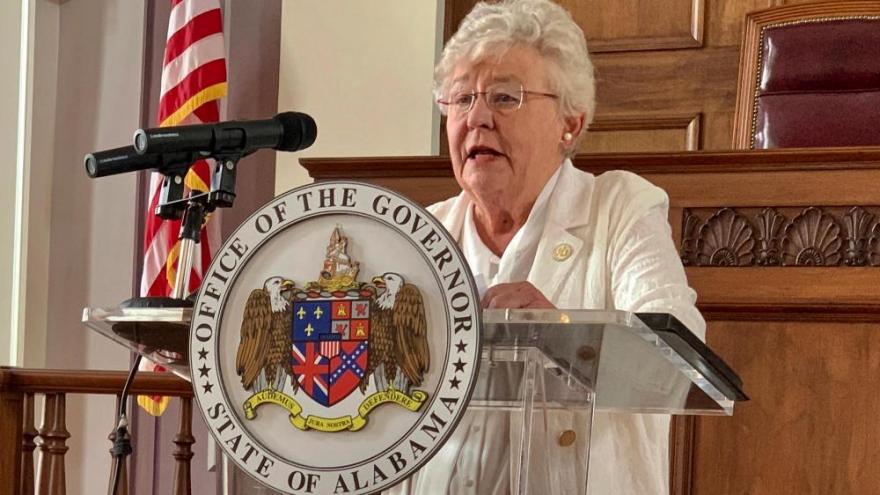 Alabama Republican Gov. Kay Ivey on Monday signed a bill into law banning the use of so-called vaccine passports in the state. Ivey is shown here during a news conference in Montgomery, Ala.

(CNN) -- Alabama Republican Gov. Kay Ivey on Monday signed a bill into law banning the use of so-called vaccine passports in the state.

The law, which went into effect immediately, prohibits any government entity from issuing vaccine passports while blocking businesses from requiring any such documentation.

"I am supportive of a voluntary vaccine and by signing this bill into law, I am only further solidifying that conviction," Ivey said in a statement after signing the legislation. "I made the choice to get the COVID-19 vaccine and glad for the peace of mind it brings. I encourage any Alabamian who has not gotten their shot to roll up their sleeves, and if you have questions, consult with your health care provider."

The legislation, which cleared the state Legislature earlier this month, defines vaccine passports broadly as "documentation of an immunization."

Schools in the state "may continue to require a student to prove vaccination status as a condition of attendance only for the specific vaccines that were already required by the institution as of January 1, 2021, provided that the institutions give an exemption for students with a medical condition or religious belief that is contrary to vaccination," according to the text of the law.

Alabama is just the latest state to put restrictions on requiring proof that a person has been immunized against Covid-19.

Some health experts argue that such proof of vaccination can be the ticket back to normalcy, saying it could reward people for getting vaccinated by allowing them into a crowded concert or ballgame, as well as offer the vaccinated peace of mind that the person next to them has been immunized, too.

But critics have stressed privacy concerns and characterized vaccine passports as an overreach by authorities.

Florida Republican Gov. Ron DeSantis cited freedom of choice as a reason for signing legislation banning vaccine passports earlier this month, saying, "In Florida, your personal choice regarding vaccinations will be protected and no business or government entity will be able to deny you services based on your decision."

Texas Gov. Greg Abbott, in a video posted to Twitter, argued that "government should not require any Texan to show proof of vaccination and reveal private health information just to go about their daily lives." The Republican last month issued an executive order prohibiting government-mandated proof of inoculation in his state.

On the national level, White House press secretary Jen Psaki said in March there will be "no centralized universal federal vaccinations database, and no federal mandate requiring everyone to obtain a single vaccination credential. ... We want to encourage an open marketplace with a variety of private sector companies and nonprofit coalitions developing solutions."