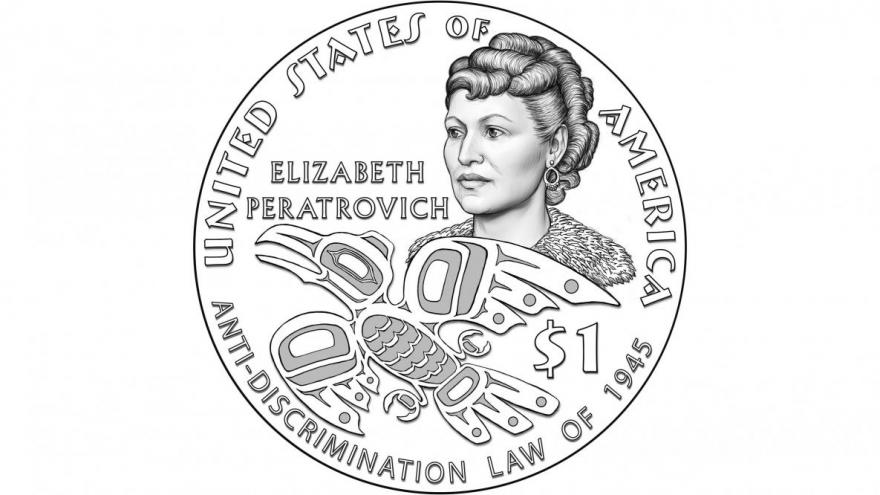 Peratrovich was a key figure in the passing of the country's first anti-discrimination law, the Anti-Discrimination Act of 1945, which prohibited discrimination based on race in Alaska.

(CNN) -- Elizabeth Peratrovich, a civil rights activist and member of the Tlingit Nation, will become the first Alaskan Native to appear on US currency.

Peratrovich was a key figure in the passing of the country's first anti-discrimination law, the Anti-Discrimination Act of 1945, which prohibited discrimination based on race in Alaska. She also served as the Grand President of the Alaska Native Sisterhood.

"This coin will be a lasting tribute to Elizabeth Peratrovich and her relentless efforts to tear down the wall of discrimination against Alaskan Natives," said Hernandez. "We will proudly produce this coin that honors her bravery and determination."

Her portrait will appear on the reverse (tails) side of a $1 coin, accompanied by the symbol of the Tlingit Raven moiety, or descent group, of which she was a member. The bottom of the design is framed by the inscription, "ANTI-DISCRIMINATION LAW OF 1945."

Peratrovich's impassioned testimony to the Alaskan Senate in 1945 is widely acknowledged to have been a key factor in the Act's passage.

Saturday also marked the official declaration of November as Alaska Native Heritage Month. The legislation was signed into law during the Alaska Native Brothers and Alaska Native Sisters Convention.

Under the Native American $1 Coin Act, the US Mint began minting $1 coins whose designs celebrate the vital contributions to US history and development made by Native American individuals and tribes. The first coin of the series, produced in 2000, highlighted Sacagawea, a Shoshone woman known for her guidance of the historic Lewis and Clark expedition.

Other years have featured designs to commemorate the continental spread of the horse, Mohawk iron workers' contribution to building New York City skyscrapers, and the pioneering achievements of Native Americans in the US Space Program.

The coins will be release in 2020, the 75th anniversary of Peratrovich's speech and the passing of the bill.