Alaskan coast 8.2 magnitude earthquake was the strongest one in decades, official says 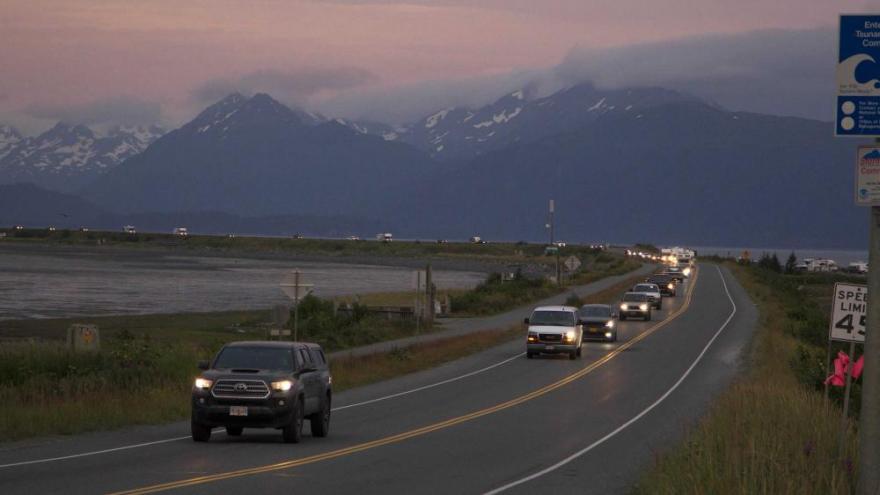 A line of cars evacuates the Homer Spit in Homer, Alaska, after a tsunami warning was issued following a magnitude 8.2 earthquake. The warning was later canceled.

(CNN) -- The 8.2 magnitude earthquake that struck off Alaska's coast Wednesday night was the strongest one since 1964, an official told CNN.

The very strong quake was located about 56 miles (91 kilometers) east southeast of Perryville, Alaska, and happened around 10:15 p.m. Wednesday, the US Geological Survey said.

"This event was felt throughout the Alaska Peninsula and Kodiak," according to the Alaska Earthquake Center.

There have been at least two strong aftershocks, including a preliminary magnitude 6.2 and magnitude 5.6, the USGS reported.

"We are now all clear and anxiously awaited for any announcement about a wave hitting (our) island," Kodiak Mayor Pat Branson told CNN in an email. "The Emergency Operations Council was up and working monitoring and informing the public of any updates. Citizens did (evacuate).

"This was the strongest earthquake since 1964 and our 3rd evacuation in 18 months. But we are all good and grateful now."

A tsunami warning issued for portions of the state shortly after the quake has been canceled for the coastal areas of South Alaska and the Alaska Peninsula and Aleutian Islands, according to the latest update from the National Tsunami Warning Center.

"A tsunami was generated by this event, but no longer poses a threat," the center said.

Police in Kodiak, the largest town on the island of Kodiak, advised residents after the quake to move to high ground, adding that the high school was open as an evacuation location.

As the alerts changed from warnings to advisories, the Kodiak Police Department said in a message, "Kodiak has been downgraded to Tsunami Advisory status however we are not all clear."

A tsunami watch had been issued for Hawaii but was later canceled. "Based on all available data there is no tsunami threat," the National Weather Service Pacific Tsunami Warning Center said.

The level of tsunami danger is being evaluated for other US and Canadian Pacific coasts in North America, according to the NWS.