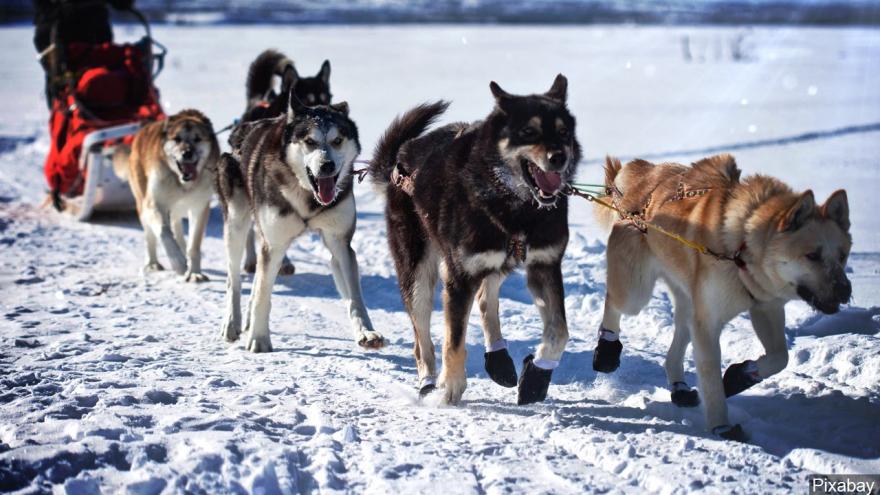 ANCHORAGE, Alaska (AP) — Pete Kaiser won the Iditarod early Wednesday, throwing his arms over his head and pumping his fists as he became the latest Alaska Native to claim victory in the iconic sled dog race.

Kaiser, 31, crossed the finish line in Nome after beating back a challenge from the defending champion, Norwegian musher Joar Ulsom.

Ulsom was about 40 minutes behind Kaiser and made up ground in the final 77 miles (124 kilometers) to Nome but couldn't overtake him. Ulsom placed second, coming across the finish line before Kaiser could get his picture taken on the winner's podium.

Kaiser greeted Ulsom under the finish line and shook his friend's hand.

It's the first Iditarod victory for Kaiser in his 10th attempt. He said he wasn't sure what made everything come together this year for him.

"Just years of knowledge gained and trying to put it all together to have a better race, better dog team this year, every little detail coming into play," he said in a post-victory interview televised statewide from the finish line, adding that a little luck didn't hurt either.

Crowds cheered and clapped as Kaiser came off the Bering Sea ice and mushed down Nome's main street with a police escort to the famed burled arch finish line. His wife and children greeted him, hugging him at the conclusion of the race, which began March 3 north of Anchorage.

Kaiser, who is Yupik, is from the southwest Alaska community of Bethel. A large contingent of Bethel residents flew to Nome to witness his victory. Alaska Native dancers and drummers performed near the finish line as they waited for Kaiser to arrive, even though it was past 3 a.m. local time.

"I've always said that I'm very fortunate to have the support system I have, the whole community of Bethel, and the whole Kuskokwim River and all of western Alaska," he said.

Kaiser called that support "extremely humbling and it motives me every to perform to my best, and I just want to thank them for coming out here tonight. This is just awesome."

Kaiser will receive $50,000 and a new pickup truck for the victory. Four other Alaska Native mushers have won the race, including John Baker, an Inupiaq from Kotzebue, in 2011.

This year's race was marked by the stunning collapse of Frenchman Nicolas Petit, who was seemingly headed for victory as late as Monday.

Petit, a native of France living in Alaska, had a five-hour lead and was cruising until his dog team stopped running between the Shaktoolik and Koyuk checkpoints.

Petit said one dog was picking on another during a rest break, and he yelled at the dog to knock it off. At that point, the entire team refused to run.

Petit had to withdraw, and the dog team had to be taken back to the previous checkpoint by snowmobile.

Petit's downfall came near the same spot on the Bering Sea coast where he surrendered the lead in the 2018 race after getting lost in a blizzard. He recovered in time to finish second last year.

Fifty-two mushers began the race in Willow. Petit was among 10 racers who withdrew during the race.

The race took mushers and their dog teams over two mountain ranges, along the frozen Yukon River and then across the treacherous, wind-swept Bering Sea coast to the finish line in Nome.

This year's race came during a bruising two-year stretch for the Iditarod that included a dog doping scandal and the loss of national sponsors amid protests by animal rights activists.

People for the Ethical Treatment of Animals is the biggest critic of the race.

"Hundreds of dogs (including six from Pete Kaiser's team) were so sick, exhausted, or injured that they were pulled from the race, forcing the ones remaining to work even harder, struggling on in what is a grueling test — not of human endurance but of a dog's ability to survive extreme cruelty," PETA Executive Vice President Tracy Reiman said in a statement issued immediately after Kaiser's victory.

"As the Iditarod draws to a close, PETA makes the point that the mushers' prize money comes at the expense of exhausted dogs' broken bones, bruised paws, and bloody ulcers and says that the race must end," Reiman said.