Alaskan salmon are decreasing in size thanks to climate change and competition, study says 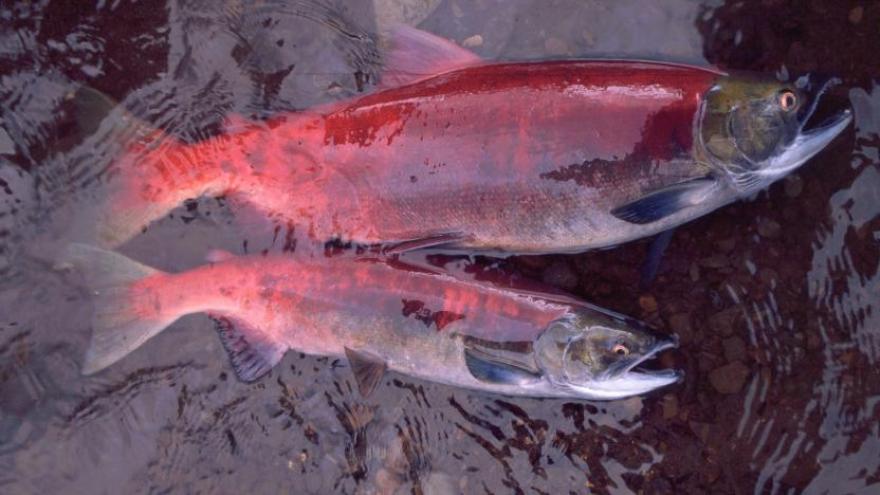 One additional year in the ocean makes a big difference in the size of salmon, as seen in these two female sockeye salmon in Pick Creek, Alaska.

(CNN) -- Alaskan salmon are getting smaller due to climate change and competition, according to a new study.

The primary cause of the declining body size of salmon, according to the study, is that the fish are spending less time out in the open Pacific Ocean.

"We saw a strong and consistent pattern that the salmon are returning to the rivers younger than they did historically," Eric Palkovacs, a professor at UC Santa Cruz and a corresponding author of the study, said in a news release.

"It seems that the ocean is becoming a riskier place to be," he said.

The study looked at four species of salmon -- Chinook, chum, coho and sockeye -- throughout Alaska where residents have noticed a decrease in salmon size.

Besides spawning at younger ages, climate change and competition from the growing numbers of wild and hatchery salmon are also significant factors in salmon size reduction, according to the study.

"We know that climate drives changes in ocean productivity, and we see a consistent signal of climate factors associated with decreasing salmon size," Palkovacs said.

"Another consistent association is with the abundance of salmon in the ocean, especially pink salmon," Palkovacs said. "Their abundance in the North Pacific is at historic highs due in part to hatchery production in Alaska and Asia, and they compete with other salmon for food."

Krista Oke, an author of the study and a scientist at the University of Alaska, Fairbanks, said that the next thing the researchers want to analyze is what is causing the shift in the ocean itself.

"There's not a single smoking gun," Oke said in the news release. "Small contributions from a lot of factors are adding up to drive these changes."