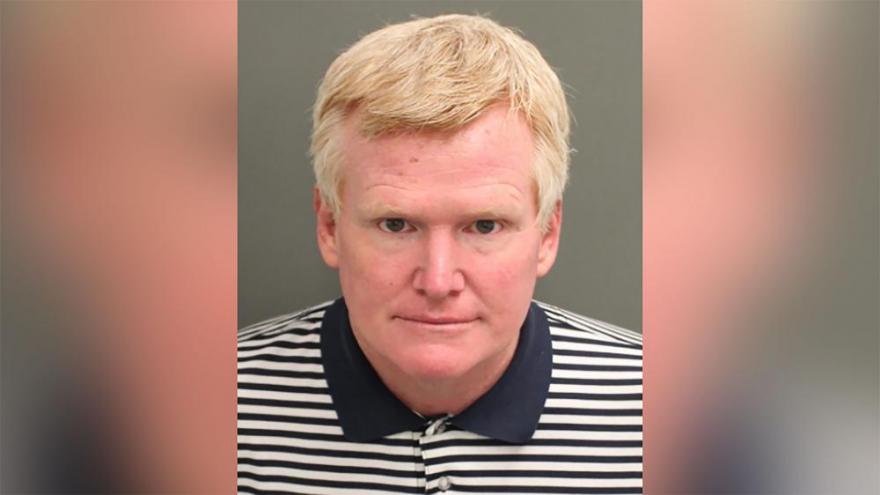 Alex Murdaugh was taken into custody October 14, in Orlando, Florida, on suspicion of misappropriating settlement funds in connection with the 2018 death of his family's longtime housekeeper, authorities said.

(CNN) -- Alex Murdaugh, a once-prominent South Carolina attorney embroiled in scandals including alleged life insurance fraud, was arrested Thursday in Florida on suspicion of misappropriating settlement funds in connection with the 2018 death of his family's longtime housekeeper, authorities said.

The arrest represents just the latest legal and personal challenge for Murdaugh, who survived being shot in the head in September and, authorities said, then admitted the shooting was a conspiracy with a former client to kill him as part of a fraud scheme so his only surviving son could collect an insurance payout.

Authorities have said several other investigations related to the Murdaugh family are underway, including into the June deaths of Murdaugh's wife and other son, who were gunned down at their family estate in Islandton.

Murdaugh, who'd been out on bond in the insurance fraud case, was arrested Thursday upon his release from a drug rehabilitation facility in Orlando. He faces two fresh felony counts of obtaining property by false pretenses, the South Carolina Law Enforcement Division said.

"Today is merely one more step in a long process for justice for the many victims in these investigations," SLED Chief Mark Keel said.

"(Agents) will continue to work tirelessly on behalf of those who were victimized by Alex Murdaugh and others. As I have said previously, we are committed to following the facts wherever they may lead us and we will not stop until justice is served."

Murdaugh was being held at Florida's Orange County correctional facility, and will remain there until a hearing on extradition to South Carolina, SLED said.

Murdaugh's attorneys released a statement saying he is expected to be transported to South Carolina's Beaufort County, where he will appear in court for a bond hearing Friday on the latest charges.

"Alex intends to fully cooperate with this investigation, as he has with the investigation into the murder of his wife and son," a statement from Murdaugh's attorneys Dick Harpootlian and Jim Griffin reads. "He deeply regrets that his actions have distracted from the efforts to solve their murders."

Murdaugh had been arrested September 16 in connection with the allegations regarding his shooting. In that case, Murdaugh was charged with insurance fraud, conspiracy to commit insurance fraud and with filing a false police report.

Harpootlian had said the June deaths of Murdaugh's wife, Margaret, and son, Paul -- which authorities have not solved -- exacerbated an opioid addiction that put Murdaugh in dire financial straits, leading him to hire a former client to kill him so his surviving son could collect about $10 million in life insurance.

Murdaugh was released on $20,000 bond in South Carolina in mid-September, and his attorneys told a judge he'd be staying at an out-of-state rehabilitation center to be treated for the opioid addiction.

The day before Alex Murdaugh was shot in the head, Murdaugh resigned from his law firm after allegations he had "misappropriated funds," the firm said. The firm has since sued him to recover money it alleges he stole from clients.

Also, the investigation into the June deaths of Margaret and Paul Murdaugh spurred SLED to open investigations into a couple other deaths in recent years, including the death of the housekeeper, Gloria Satterfield.

The investigations have gripped South Carolina's Lowcountry, where the Murdaughs have been a prominent family for decades. Three members held the office of 14th Circuit solicitor for 87 years, ending with Murdaugh's father, who left office in 2005.

The housekeeper's death, and the settlement

SLED announced in mid-September it was opening a criminal investigation into Satterfield's death based on a request from the Hampton County coroner highlighting inconsistencies in the ruling of her manner of death, as well as other information gathered during other investigations involving Murdaugh.

Satterfield, who worked for the Murdaughs for 25 years, died following what was described as a "trip and fall" accident at the Murdaugh home in 2018, said Eric Bland, an attorney for Satterfield's estate.

In its request to SLED, the coroner's office wrote Satterfield's death was "not reported to the coroner at the time, nor was an autopsy performed." Her death certificate notes the manner of death was "natural," which the coroner wrote was "inconsistent with injuries sustained in a trip and fall accident."

After Satterfield died, a $500,000 wrongful death claim was filed against Murdaugh on behalf of her estate, Bland told CNN. The estate has not received any of the money owed as the result of a 2018 civil settlement, according to Bland.

In September, Bland filed a lawsuit against Murdaugh on behalf of Satterfield's estate seeking the money they say they are due.