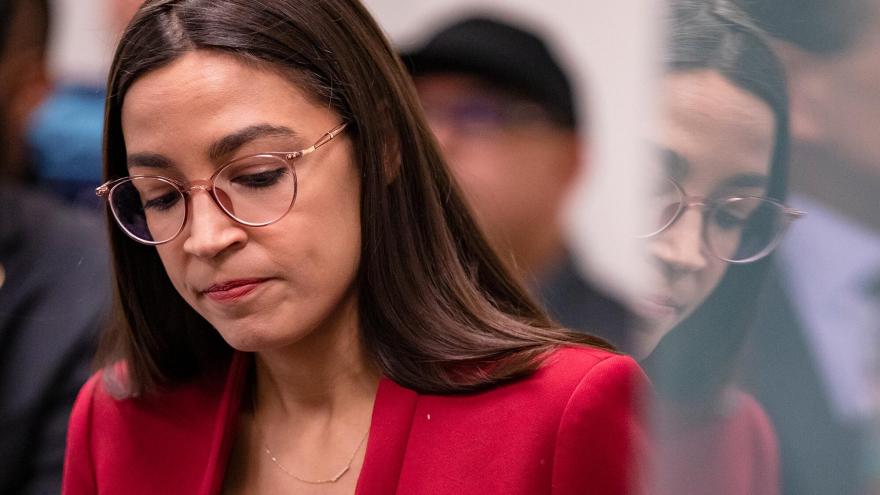 Rep. Alexandria Ocasio-Cortez (D-NY) attends a press conference with Rep. Andy Levin (D-MI) about their new bill called the EV Freedom Act on Capitol Hill on February 6, 2020 in Washington, DC. The EV Freedom Act is a plan to create a nationwide charging infrastructure for electric vehicles.

(CNN) -- Democratic Rep. Alexandria Ocasio-Cortez said during an Instagram Live broadcast Monday night that she is a survivor of sexual assault.

Ocasio-Cortez made the statement, which appeared to be one of the first times she has spoken in public about being a survivor, in contextualizing her trauma in the wake of the insurrection at the US Capitol last month. The New York Democrat went through a detailed account of her day on January 6, recounting her experience during the riot.

She said those in Congress who are telling her "to move on," or even apologize, following the violent insurrection at the Capitol in January were using "the same tactics of abusers."

"The reason I say this and the reason I'm getting emotional in this moment is because these folks who tell us to move on, that it's not a big deal, that we should forget what's happened, or even telling us to apologize. These are the same tactics of abusers. And, um, I'm a survivor of sexual assault," Ocasio-Cortez said. The congresswoman did not share details of the assault.

"And I haven't told many people that in my life. But when we go through trauma, trauma compounds on each other. And so, whether you had a negligent or a neglectful parent, and -- or whether you had someone who was verbally abusive to you, whether you are a survivor of abuse, whether you experience any sort of trauma in your life, small to large -- these episodes can compound on one another."

Throughout a more than one-hour broadcast on Instagram Live, Ocasio-Cortez shared distressing details about her experience on January 6. One of the most harrowing aspects of the story was her retelling of when a man came into her office unannounced, banged on several doors and yelled, "Where is she?" Ocasio-Cortez said she thought that man was an insurrectionist, but he was a Capitol Police officer.

"I thought I was going to die," Ocasio-Cortez said.

Recounting her experience, Ocasio-Cortez said she had just returned to her office from getting the second dose of her Covid-19 vaccine when she and her legislative director, her only staffer with her at the time, heard loud bangs on doors in the hallway. Ocasio-Cortez said it was about 1:01 p.m. ET because she said she had just gotten off the phone with her chief of staff.

"I hear huge violent bangs on my door and then every door going into my office," Ocasio-Cortez said. "Like someone was trying to break the door down. And there were no voices. There were no yells. No one saying who they were, nobody identifying themselves."

Ocasio-Cortez said she ran into her legislative director's office, who then told her to hide. She at first hid in the office's bathroom before attempting to move across the room into a closet. Ultimately, she decided to stay in the bathroom after she felt it was too late to move.

"I just started to hear these yells of, 'Where is she? Where is she?'" Ocasio-Cortez recalled during the Instagram Live broadcast.

Ocasio-Cortez said at that point she was hiding behind the bathroom's door, and was able to see the officer -- who she says had not identified himself -- moving through her office, including opening the door to her personal office.

"I have never been quieter in my entire life," Ocasio-Cortez said. "I held my breath," adding, "This was the moment where I thought everything was over."

It wasn't until a few moments later when a staffer told her it was OK to come out that she realized the man was a Capitol Police officer.

Ocasio-Cortez communications director Lauren Hitt confirmed to CNN that the man in the black beanie who yelled, "Where is she?" throughout the office unannounced was the same person as the Capitol Police officer.

The New York Democrat said her encounter with this Capitol Police officer "didn't feel right," and she was unnerved that he did not identify himself.

"Things weren't adding up," she added, saying she believed he was looking at her with "anger and hostility."

She said the police officer told her and her staffer to "go down" and "go to this other building," adding that she purposefully omitted the name of the building for security reasons.

"The situation felt so volatile with this officer that I run over, I grabbed my bag and we just start running over to that building," she said.

Running unescorted to the other building the officer instructed her to, Ocasio-Cortez said they realized that they had not been told a specific location to go.

Without a place to shelter, Ocasio-Cortez said she and her legislative aide urgently tried to find somewhere to hide in the building as they started hearing rioters who were in the process of storming the Capitol. She and her staffer went to multiple different floors and knocked on the doors of several different offices before finding Rep. Katie Porter, a California Democrat, walking through the hallway with a cup of coffee, Ocasio-Cortez said during the Instagram Live.

Once inside Porter's office, Ocasio-Cortez said staffers barricaded the door and they found casual clothes she could change into to blend in and be more mobile in case she had to escape. Ocasio-Cortez estimated she was in Porter's office for approximately five hours until it was safe for members to finish certifying the election results.

"All these crazy thoughts go through your mind," Ocasio-Cortez said, sharing what she felt while in Porter's office. "Are some offices safer than others because they have White sounding names? Or male sounding names?"

Ocasio-Cortez said Rep. Ayanna Pressley, a Massachusetts Democrat who is a fellow member of the progressive group called "The Squad," texted her to "come and eat" and she ended up staying in Pressley's office until about 4 a.m. ET.

Ocasio-Cortez said she had felt unsafe in the days leading up the insurrection and had her staff draw up a security plan for January 6, anticipating some sort of incident.

"The week prior to the insurrection I started to get text messages that I needed to be careful, and that in particular, I needed to be careful about (January 6)," she said. "Those text messages came from other members of Congress. They were not threats, but they were other members, saying that they knew, and that they were hearing -- even from Trump people and Republicans that they knew in their life -- that there was violence expected on Wednesday."

The progressive congresswoman detailed a tense situation at the Capitol in the days before the riot, her encounters with "Stop the Steal" protesters as she came to and from the Capitol and that, by January 5, she did not feel safe going outside.

"On Monday we were already, as members of Congress, having heightened interactions with these people," she said. "And so, anyone who tells you that we couldn't have seen this coming is lying to you. Anyone who's gone on the record and said that there was no indication of violence has lied. There were so many indications of this leading up to that moment. They were there on Monday."

In a pair of tweets following her broadcast, Ocasio-Cortez wrote that her "story isn't the only story, nor is it the central story of what happened on Jan 6th."

"It is just one story of many of those whose lives were endangered at the Capitol by the lies, threats, and violence fanned by the cowardice of people who chose personal gain above democracy," she said.

And thanking those who listened to her story on Instagram Live, the congresswoman again addressed people asking members of Congress to "move on."

"And to those who wish to paper over their misdeeds by rushing us to all 'move on' - we can move on when the individuals responsible are held to account," she wrote.

This story has been updated with additional details of Ocasio-Cortez's account of the Capitol insurrection.