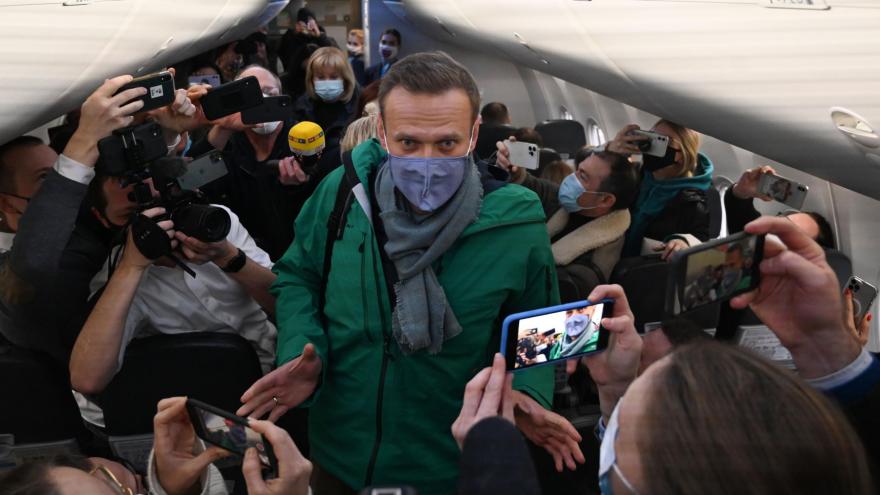 (CNN) -- Russia's leading opposition figure and chief Kremlin critic, Alexey Navalny, has left Berlin on a flight bound for Moscow, where he will likely be greeted by his supporters as well as authorities poised to arrest him.

The 2.5-hour flight by Russian carrier Pobeda took off from Berlin Brandenburg Airport and is due to land in Moscow's Vnukovo, which was heavily guarded by police Sunday.

Navalny arrived in Germany five months ago in a coma after being poisoned with Novichok, a military-grade nerve agent developed by Russia during the Soviet years. After an extraordinary recovery, Navalny appears ready to return to his role as the thorn in President Vladimir Putin's side, seemingly undeterred by his close shave with death.

He thanked all the other passengers on the flight as he and his wife, Yulia Navalnya, boarded the plane in Berlin, according to a live feed from TV Rain.

"Thanks to you all, I hope we will get there fine," Navalny said. "And I'm sure everything will be absolutely great."

Several Western officials and Navalny himself have openly blamed the Russian state for the poisoning, which the Kremlin has denied.

"They are doing everything to scare me," Navalny said in an Instagram post and video Wednesday. "But what they are doing there is not of much interest to me. Russia is my country, Moscow is my city, I miss it."