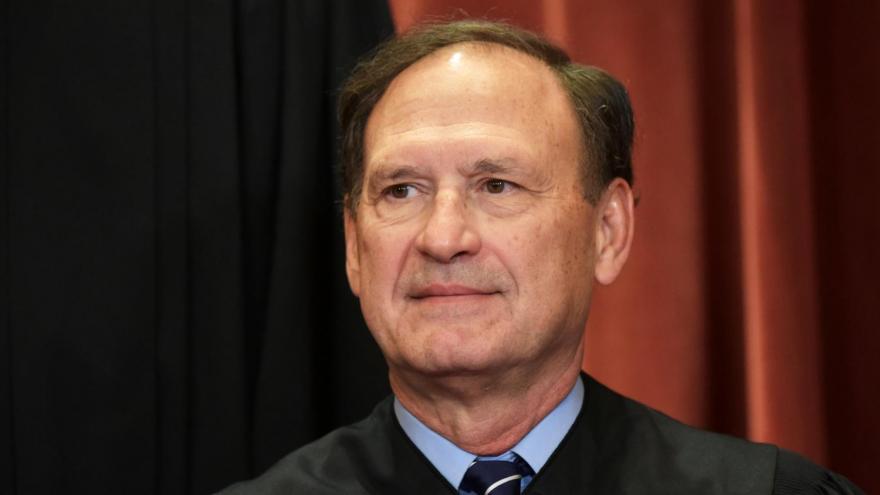 Associate Justice Samuel Alito poses for the official group photo at the US Supreme Court in Washington, DC on November 30, 2018.

(CNN) -- Justice Samuel Alito said Thursday night that he worried about the future of religious liberty in the United States, expressing particular concern as it applies to Covid restrictions and the Supreme Court's decision in 2015 clearing the way for same-sex marriage nationwide.

"It pains me to say this," Alito said, "but in certain quarters, religious liberty is fast becoming a disfavored right."

The remarks -- an enlargement of themes he's written about -- came as he was addressing the conservative Federalist Society via Zoom for its annual conference.

The speech was particularly notable because it comes at a fraught time on the heels of a divisive election, when Chief Justice John Roberts has sought to keep the court out of the political fray. Alito, instead, took on the restrictions of in-person worship services during the pandemic -- an issue that is currently before the court -- as well as Obergefell v. Hodges, the opinion that cleared the way for same-sex marriage nationwide. He also returned to the issue of the Second Amendment and touched on the possibility that Democrats may seek to restructure the size of the court.

His comments on religious liberty at times echoed those of President Donald Trump who pledged from the White House Rose Garden in 2017 that he would prevent the federal government from "bullying and even punishing Americans for following their religious beliefs."

In addressing Covid-19, Alito pointedly noted that he was not trying to diminish the severity of the pandemic, which he said has taken a heavy human toll, leaving "thousands dead, many more hospitalized," nor was he commenting on whether the restrictions represent good public policy. "I am a judge, not a policy maker," he said.

But he said that he wanted to emphasize the impact of the restrictions on the rule of law and individual rights as officials have moved to combat the virus.

"We have never before seen restrictions as severe, extensive and prolonged," he said, and added that the pandemic has resulted in "previously unimaginable restrictions on individual liberty."

Alito said that the Covid crisis has served as a "sort of constitutional stress test" that has highlighted "disturbing trends" that were present before the virus appeared. He pointed to emergency orders over the summer where the court sided with officials who sought to restrict the number of people who could worship in person and he lambasted his colleagues for ruling in favor of state and local officials even when he thought churches were being treated differently from other entities that had fewer restrictions.

Earlier Thursday the court received yet another emergency petition on the issue, this time from the Roman Catholic diocese of Brooklyn seeking relief from an executive order from New York Gov. Andrew Cuomo, a Democrat.

Is a hard line justified?

Alito's discussion turned to recent religious liberty cases concerning the Little Sisters of the Poor, an order of nuns who didn't want their health plans to provide contraceptives to their employees, as well as 2018 case concerning a baker who refused to make a cake to celebrate a couple's wedding out of religious objections to same sex marriage.

Alito said that "a great many Americans disagree, sometimes quite strongly" with the religious beliefs of the Little Sisters and the cake baker, "and of course they have a perfect right to do so." But, he said, the cases raised another question.

"The question we face" is whether our "society will be inclusive enough to tolerate people with unpopular beliefs." And he wondered about those who believe they may be winning the cultural wars by taking a hard line of "you lost, live with it."

Taking such a hard line, Alito suggested, "seemed to work reasonably well in Germany and Japan after 1945," he said and asked rhetorically, "is our country going to follow that course?"

Returning to last summer's cases concerning restrictions to in person worship services in Nevada and California during the pandemic, he said the restrictions "blatantly discriminated against houses of worship."

"In both cases the court allowed the discrimination to stand," he said giving a justification that the court should defer to the judgment of the governors because "they have the responsibility to safeguard the public health."

He lambasted the governor of Nevada who, he said, had allowed fewer restrictions to casinos than houses of worship.

"If you want to worship and you are the 51st person in line, sorry you are out of luck," he said.

"The state's message is this: forget about worship and head for the slot machines or maybe a Cirque de Soleil show."

Alito also reiterated what he had written in 2015, when he dissented from the court's decision to clear the way for same-sex marriage nationwide.

"I could see," he said, where the decision would lead for those who "cling to traditional views on marriage."

He reiterated that opponents of the ruling would risk being "labeled as bigots and treated as such by governments, employers and schools."

"That is just what has come to pass," he said. "One of the great challenges for the Supreme Court going forward will be to protect freedom of speech."

And he saved particular anger for a Second Amendment case the court heard last term. In the end, the court dismissed the case because the law in question was changed after the justices agreed to hear the case.

On Thursday, as he did in his dissent, Alito took special aim at a brief filed by five Democratic senators who had urged the court to dismiss the case and had warned that if it did not, the public would believe the court was motivated by politics. The senators said the "Supreme Court is not well" and floated the possibility that it might need to be "restructured."

"This little episode, I'm afraid, might provide a foretaste about what the court will face in the future, and therefore I don't think it can simply be brushed aside," he said.

Alito's speech comes after Justice Amy Coney Barrett completed her first sitting on the court. Her nomination was championed by supporters of religious liberty, who believe she will join the court's right flank on the issue.