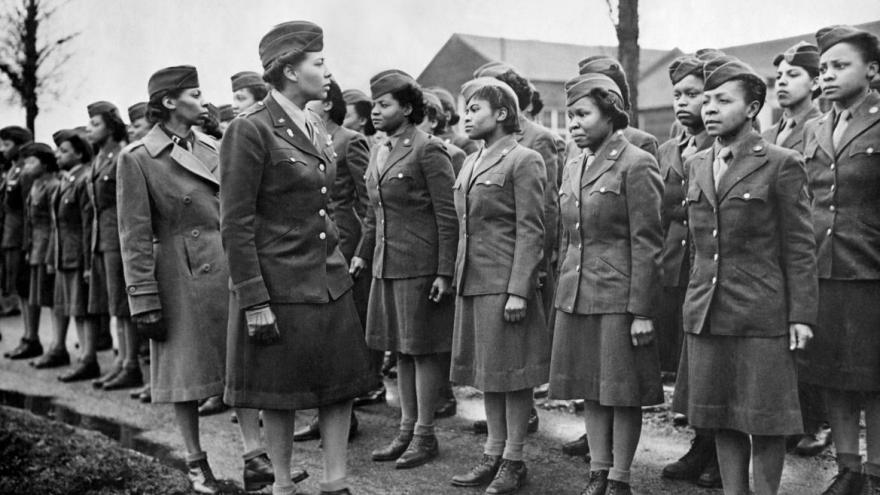 The all-Black 6888th battalion of the Women's Army Corps took on a massive backlog of mail in the European front in World War II.

(CNN) -- An all-Black Women's Army Corps unit that sorted millions of pieces of mail in unheated warehouses during World War II will finally be awarded a Congressional Gold Medal decades after the fact.

President Joe Biden signed a bill into law on March 14 that awards a Congressional Gold Medal to the women of the 6888th Central Postal Directory Battalion, nicknamed the "Six Triple Eight." The honor was granted "in recognition of their pioneering military service, devotion to duty, and contributions to increase the morale of personnel stationed in the European theater of operations during World War II," the bill states.

The bipartisan bill, introduced by Sens. Jerry Moran (R-Kansas) and Jacky Rosen (D-Nevada), was passed by the Senate in April 2021 and the House last month.

The Six Triple Eight was a unit made up of about 850 Black women who were tasked with overcoming a massive backlog of mail, according to the Department of Defense. The unit traveled to Great Britain in 1945, surviving encounters with Nazi U-boats and a German rocket explosion along the way, before spending months sorting through mail and packages stacked to the ceiling in unheated warehouses, according to the US Army Center of Military history.

They adopted the motto, "No mail, low morale." The unit set up a new mail tracking system and cleared the six-month backlog of mail in just three months, the center said. By the end of the war, the unit processed about 17 million pieces of mail, according to the National World War II Museum.

Like much of the country, the military was segregated throughout World War II. Black service members faced continuous racism, and the women of the 6888th have sharp memories of being segregated on trains, spat at and demeaned by White men and women.

The unit later was moved to France and then ultimately disbanded without fanfare in 1946. There were no commemorative ceremonies for members when they came home at the end of the war.

The Six Triple Eight was led by Army Maj. Charity Earley (née Adams), who later rose to the rank of lieutenant colonel. She died in 2002, and her son praised the belated recognition last year.

"It's wonderful, and it's time," said Stanley Earley III. "It should have happened 50, 60 years ago. But there is now the opportunity for a recognition that these folks did all these things that were so important."

As of last summer, only seven members were believed to still be alive, he said.

The medal is part of a belated recognition of the unit's efforts in recent years. A monument honoring the battalion was dedicated in Fort Leavenworth, Kansas, in 2018. A documentary, "The Six Triple Eight: No Mail, Low Morale," celebrated the mail tracking system the battalion created.

In a statement, Moran and Rosen praised the signing of the bill and the battalion's war efforts.

"The heroic, barrier-breaking members of the Six Triple Eight Battalion -- which included brave Nevada women -- played a crucial role in the operations of our armed forces during World War II," Rosen said. "They deserve our nation's highest honors for their service. There is no better time to give them this long-overdue recognition than during Women's History Month, and I'm proud to see President Biden sign our bipartisan legislation into law."

"The women of the Six Triple Eight have earned a special place in history for their service to our nation, and as of today, their sacrifice is enshrined into law with the highest distinction Congress can bestow," Moran said. "It has been an honor to meet members of the battalion and help lead this effort to award the Six Triple Eight with the Congressional Gold Medal -- the highest expression of national appreciation from Congress."

The White House has not yet set a schedule for when the award will be granted.