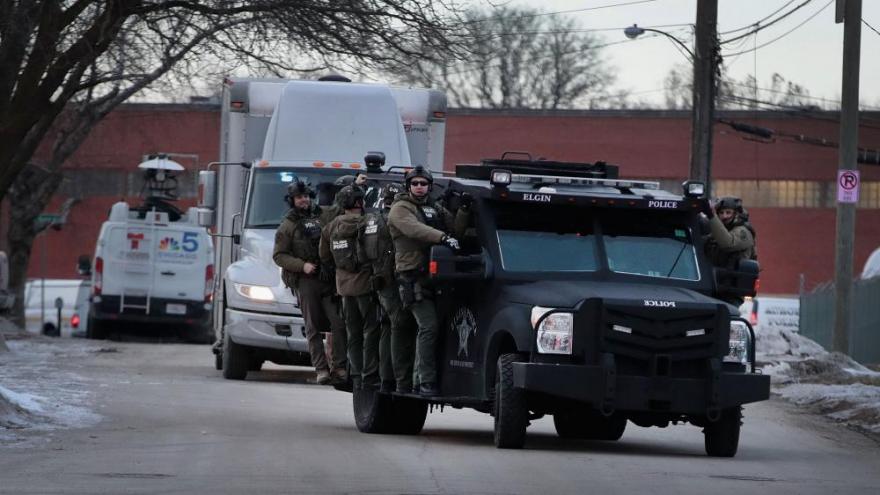 Police secure the area following a shooting at the Henry Pratt Company on February 15, 2019 in Aurora, Illinois.

(CNN) -- Five days after five officers were injured responding to a gunman who opened fire on his workplace in Aurora, Illinois, one remains hospitalized.

The officers immediately came under fire -- possibly from a window -- as they arrived to Henry Pratt Co. on Friday, authorities said. One officer was hit outside the manufacturing plant, with others struck inside the building after they used a Bearcat armored vehicle to enter, police have said.

Four officers were shot and one was wounded by shrapnel, police said. They were treated at area hospitals for injuries not considered life-threatening, Aurora police chief Kristen Ziman said Saturday.

All but one officer has since been released from the hospital, Aurora police spokesman Bill Rowley said Tuesday.

Gary Martin was called in to a meeting on Friday at the manufacturing company where he worked for 15 years. When he was told he had been fired, authorities said he used a pistol he carried with him into the meeting to open fire.

After fatally shooting several people in the room, he stormed into the warehouse, witnesses said. There, he shot at more employees.

Martin was "running down the aisle" gunning down people with a pistol that had a green laser sight on it, an employee told CNN affiliate WLS.

"As soon as I saw the green thing and heard the shots, we left," said John Probst, who has worked at the plant for 40 years. "He started opening up on the room, and he was just shooting everybody."

Probst said one of the victims who ran out with his arm bleeding told him the gunman "went ballistic."

The rampage lasted about 90 minutes before police killed him in a shootout. Martin killed five people and injured six others -- including the five officers.

The five workers killed at the industrial valve manufacturer's 29,000-square-foot warehouse included the plant manager, human resources manager and an intern on his first day. Another of the gunman's colleagues was wounded.

The people who died in the shooting are:

• Trevor Wehner of DeKalb, Illinois, a human resources intern and a student at Northern Illinois University.

The names of the five wounded officers and the wounded worker -- all men -- have not been released.

The gunman did not legally own the pistol he used in the attack -- and he lied to get it.

Martin had been issued a firearm owner's identification card, or FOID card, in January 2014, and in March of that year passed a background check and purchased a .40-caliber Smith & Wesson handgun from a dealer, according to Ziman.

When he applied for that card he answered "no" to the question "Have you ever been convicted of a felony?" Illinois State Police, or ISP, said Monday.

That was a lie.

When he applied for a concealed-carry permit later that month, his fingerprints revealed that the gunman was convicted of aggravated assault in Mississippi in 1995, Ziman said

Ziman said his concealed-carry permit was rejected and his FOID card was revoked. State police sent him a letter telling him to voluntarily relinquish his weapon to police, Ziman said.

How the gunman ended up keeping the gun will be part of the investigation of the incident.