'All sorts of crises': Biden's holiday agenda ranges from Ukraine to Supreme Court 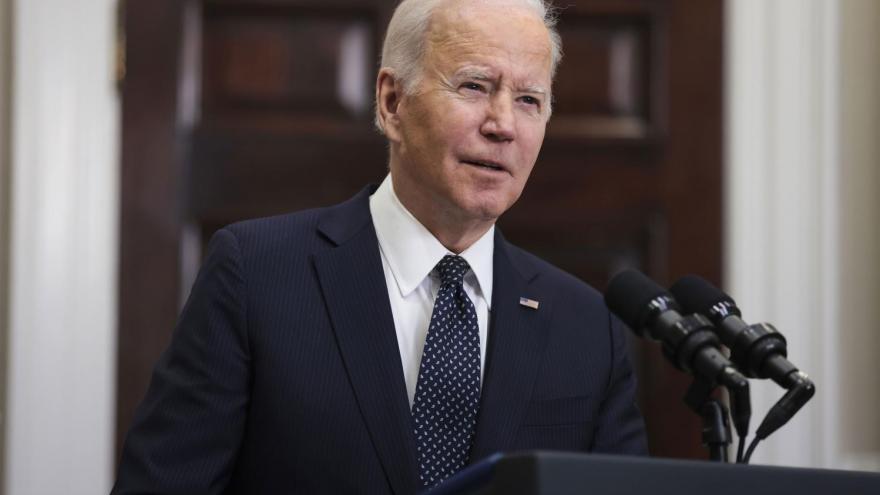 U.S. President Joe Biden speaks in the Roosevelt Room of the White House in Washington, D.C., U.S., on Friday, Feb. 18. On the day honoring the American presidency, its current incumbent is wrestling with a slate of consequential matters that illustrate the scope and the limits of the job.

(CNN) -- On the day honoring the American presidency, its current incumbent is wrestling with a slate of consequential matters that illustrate the scope and the limits of the job.

President Joe Biden is readying massive sanctions on Moscow after predicting a Russian invasion of Ukraine could begin at any moment. Yet the outcome he most desires -- avoiding all-out war -- rests solely in the hands of Russian President Vladimir Putin, whose calculations remain something of a mystery.

He is nearing a decision on the first Black woman to be nominated to the Supreme Court and will announce his selection at some point in the next week. But even when confirmed, the pick will not alter the court's conservative majority.

And he is several drafts into a State of the Union speech aides hope can recalibrate his economic message amid high inflation and Covid exhaustion, two issues with only narrow room for presidential intervention.

The disparate entries on Biden's to-do list reflect a president's wide portfolio. For this president, they come against the backdrop of weak poll numbers and growing fears among his Democratic Party that congressional elections later this year will result in a wipeout.

That's a vastly different environment from Biden's first address to Congress last April, when he'd recently signed a popular Covid relief package into law and vaccine access was generating optimism the pandemic was nearing its end.

"If you look at President Biden's situation right now, in some ways he's facing all sorts of crises, multiple ones. Maybe that's where a president lives," said Doris Kearns Goodwin, the Pulitzer Prize-winning presidential historian. "But he's got to worry about this (Russia) crisis, he's worrying about Covid, he's worried about inflation, he's worried about Congress, and most importantly, an assault on democracy. In a certain sense, once this thing is settled in some way or another, that's going to be the major crisis that I think he has to face."

Biden and his team say he is uniquely positioned to confront this moment. Officials describe the current set of issues he faces as directly in Biden's wheelhouse and describe a President eager to take them on.

Over the course of his decades-long Senate career, he was chairman of both the Foreign Relations and Judiciary Committees -- experience that lends itself to the Ukraine and Supreme Court situations. He has attended more State of the Union speeches than perhaps any person currently alive.

Biden once hoped to escape the taut atmosphere in Washington for Wilmington last weekend to continue working on his speech, but after some back-and-forth, decided to remain at the White House over the holiday. He spent the previous weekend going over drafts with his top message adviser Mike Donilon at Camp David.

As he writes his address, Biden is seeking ways to convey his understanding of Americans' economic unease, according to officials, who say the President will deliver a message that reflects current anxiety over high prices while also touting the past year's accomplishments.

White House chief of staff Ron Klain told Democratic senators in a meeting last week to expect some "good surprises" in the speech, according to some of the participants. And Biden's team is sketching out a plan to take his message on the road following the address. Biden has voiced a desire to get out of Washington more this year, but still hasn't traveled much nearly two months into 2022. He visited Ohio last week and has made stops in Pittsburgh and New York City, but aides say he'd prefer to be out of Washington more often.

"The important thing for him -- and he should come by this naturally, because he's very good at this, unusually good for politicians -- is to speak to people about what's going on in their lives and give them a sense of understanding about what's going on in their lives without looking and trying too hard to tell them what a great job he's doing," said David Axelrod, a senior adviser in President Barack Obama's White House and CNN senior political analyst. "He needs to be the empathizer-in-chief."

One great unknown as Biden writes his speech is whether a full-blown Russian invasion of Ukraine will be underway by the time he delivers it next Tuesday. While he said last week Putin had decided to invade, and the US has intelligence indicating orders have been sent to Russian commanders to proceed with an attack, the contours of the coming days are far from clear.

On Sunday, the White House said Biden agreed "in principle" to French-brokered summit talks with Putin as long as Russia does not further invade Ukraine. Still, in a statement, press secretary Jen Psaki appeared to downplay the prospects of a meeting actually materializing given what US officials have said the high likelihood is Putin could launch an invasion soon. And other US officials made clear no plans -- either on timing, format or location -- currently exist for the two leaders to meet.

Biden remains cognizant that for many Americans, the crisis remains a faraway concern. He sought to underscore the importance of the situation to Americans in remarks last week, and he remains mindful that new sanctions on Russia could cause prices to go even higher at home.

"I will not pretend this will be painless," he said -- a message that could reappear in his State of the Union.

Much of Biden's time over the past weeks has been consumed by the crisis. He spent several hours in the Situation Room with his National Security Council on Sunday, reviewing the latest intelligence showing Russian forces massing in ever-increasing numbers along Ukraine's borders and re-checking plans to levy enormous sanctions on Moscow if an invasion moves ahead. A photo from the session showed the top US officials in the fields of defense, intelligence, diplomacy and finance attending the meeting.

The Ukraine crisis is the most significant foreign policy challenge for Biden since the chaotic withdrawal from Afghanistan last summer. While not their most pressing concern, aides are mindful of the chance to reverse the sense of incompetence that surrounded that period. To that end, Biden has spoken to world leaders almost every day after being accused of failing to consult allies before and during the withdrawal from Afghanistan.

Even amid the crisis, Biden has been toting around briefing materials about potential high court picks, reviewing the legal writings, speeches and even social media histories of the three or four candidates he's now choosing among to nominate in the next week.

Klain kept his cards closely held in the meeting with Democrats last week, and the White House has refused to say whether Biden has met in person with any potential candidates. A person familiar with the process, however, said Biden sat down with at least one candidate late last week. It's unclear how many face-to-face sessions Biden has done or if he met with anyone else over the weekend as he dealt with the Ukraine crisis, but the "interview phase is underway," the person familiar said, and things are on track for an announcement within the next week.

At the same time, a team of messaging and legislative experts has assembled at the White House in preparation for the nominee.

At a moment of political weakness, the Supreme Court pick has the potential to galvanize Democrats. A CNN Poll of Polls average on Biden's approval rating stands at 41% approve to 55% disapprove.

Biden, who has vowed to choose a Black woman, plans to make and announce his selection ahead of the State of the Union speech. The White House is mindful that whomever he picks could be subject to attacks.

"We're going to try our best to keep them intact through this whole process. And then when we have a nominee, we're going to, of course, fight for that nominee," said Cedric Richmond, a senior advisor to the president and director of the White House Office of Public Engagement, on a call with faith and community groups this week, according to a person who listened.

"Hopefully," Richmond said, "that'll be done sooner rather than later."