All US forces have left Bagram Air Base, as US withdrawal from Afghanistan nears completion 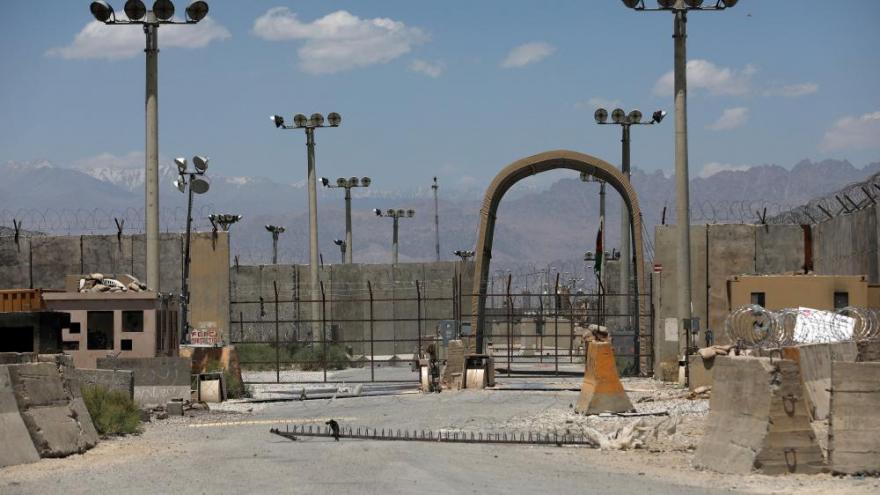 (CNN) -- The last US troops have left Bagram Air Base, according to a US defense official, marking the end of the American presence at the sprawling compound that became the center of military power in Afghanistan.

The full withdrawal of US troops from the country is not complete yet but expected very soon.

Nearly two decades after the first American troops arrived at Bagram and helped take control of the field after the 9/11 attacks, the transfer of the field to the Afghan military proceeded without fanfare, a hushed finale that portends the imminent conclusion of America's longest war.

Once a dilapidated runway that barely had electricity in the surrounding buildings, the airfield became a small city in its own right, complete with shops, gyms, and classrooms for the thousands of servicemembers and contractors who worked at the base and its facilities.

The two-mile runway, streaked with the dark black tire marks of countless takeoffs and landings, was the jumping off point for military operations throughout the country, with space for cargo aircraft, fighter jets, and attack helicopters. Presidents George W. Bush, Barack Obama and Donald Trump all visited Bagram during their time in office, promising victory and a better future for Afghanistan.

Bagram was officially handed over to the Afghan military Friday, Rohullah Ahamadzai, spokesman for the Afghan Ministry of Defense told CNN.

But the withdrawal from Bagram, devoid of any pomp and ceremony, is a symbolic victory for the Taliban, who have waged a relentless cross-country battle against the Afghan military, pushing back government forces and overrunning a growing number of districts.

A Taliban spokesman called the withdrawal of foreign forces from Afghanistan a "positive step."

"The presence of foreign forces in Afghanistan was a reason for continuation of fighting in the country," Taliban spokesman Zabiullah Mojahid told CNN Friday. "If foreign forces leave Afghanistan, Afghans can decide future issues among themselves. We will step forward for the security of the country and our hope for the peace would increase and inshallah we will have development."

On Thursday, Defense Secretary Lloyd Austin spoke with Afghan Minister of Defense Bismillah Khan Mohammadi, saying the United States was invested in the "security and stability of Afghanistan" as the withdrawal neared its completion.

Bagram was the entry point for tens of thousands of troops who came into the country as part of the War on Terror, and it was the exit point for many of the nearly 2,000 US servicemembers killed in action during 20 years of fighting. Troops stood on the main road through the airbase, known as Disney Drive, as the flag-draped coffins of servicemembers killed in Afghanistan drove past on their way to the flight line for their final journey home.

For years, the base was the target of numerous Taliban attacks, including suicide bombings and rocket attacks. In the end, it wasn't violence that led to the US exit, but diplomacy. The Pentagon had been drawing down the troop presence in Afghanistan for years, but the Doha Agreement, signed between the Trump administration and the Taliban in Qatar in February 2020, signaled the beginning of the end. In mid-2011, there were nearly 100,000 US troops in the country, and another 35,000 US contractors. A decade later, that number had plummeted to 2,500 troops and 18,000 contractors.

The Biden administration made it clear the last remaining troops would be out by September 11 at the latest, but as the withdrawal progressed, it became clear they would be out far earlier.

Over the last few days of the US withdrawal, crews loaded shipping crates onto cargo planes, loading up the last of what was deemed valuable enough to remove from the country. On Tuesday, US Central Command, which oversees Afghanistan, said it had removed the equivalent of nearly 900 C-17 cargo loads out of Afghanistan and destroyed nearly 16,000 pieces of equipment.

Two planes carrying US and coalition forces and equipment departed the base Thursday night, according to an Afghan army source.

A third plane departed the base early Friday morning, the source told CNN.

Afghans' reaction to US troops leaving

Sayed Reja, a 30 year-old employee in Kabul for a logistics company, told CNN that American troops "shouldn't go this soon."

"They could have stayed for longer until the Afghanistan government was on its feet. But now they have left, and we cannot stop them from leaving Afghanistan," he said.

He said that Afghans need to "work together to build the country again -- if this happens naturally, troops leaving is a good thing."

"First of all this is the decision of the USA, we have to respect that it is their decision," said Ilyas, a 30-year-old man in Kabul who declined to give his last name to CNN.

"But for Afghans that is a really big problem, now the war between the Afghan government and the Taliban will be worse," he said. "The Taliban has reached the border of the cities, and this is a big problem. Now Afghan people are afraid for our future and they are concerned about what the future holds."