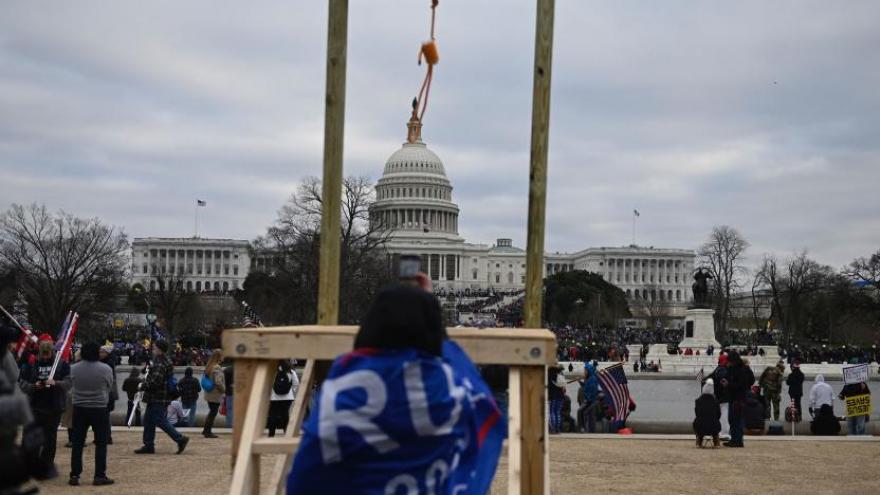 Garret Miller, a man charged with storming the Capitol and later threatening Rep. Alexandria Ocasio-Cortez, also allegedly posted racist messages online advocating for the public execution of a Black police officer that he believed killed a pro-Trump protester, federal prosecutors said Monday. Supporters of US President Donald Trump are shown gathering across from the US Capitol on January 6, 2021, in Washington, DC.

Prosecutors said that in the days after the January 6 attack, Garret Miller became obsessed with identifying the US Capitol Police officer involved in the fatal shooting of Ashli Babbitt and seeking "justice." According to court filings, Miller identified a Black police officer that he believed to be responsible for Babbitt's death and circulated the officer's picture on Facebook.

"He's a prize to be taken," Miller allegedly said of the officer, according to new court filings.

Prosecutors said Miller threatened to "hug his neck with a nice rope" and that "he will swing." Miller allegedly sent a picture of a rope tied to a noose to an associate over Instagram and said, "I had a rope in my bag that day."

Investigators said that when they searched Miller's home in Texas, they found two ropes, several firearms, ammunition, body armor, and a crossbow.

Miller should remain in jail, prosecutors said Monday. A virtual court hearing on the matter is scheduled for Thursday at federal court in Washington, DC.

Prosecutors also noted in the court filing that Miller was wearing a shirt that said, "I Was There, Washington D.C., January 6, 2021" when he was arrested at his home in Dallas.

The US Capitol Police has not identified the officer who killed Babbitt as she tried to breach the Speaker's Lobby where lawmakers were evacuating from the House chamber. Investigators recommended against charging the officer with crimes, finding that it was a justified shooting.

There is no indication that Miller accurately identified the officer who pulled the trigger.

In addition to the racist comments about the police officer, Miller allegedly tweeted, "assassinate AOC," referring to the popular nickname for Ocasio-Cortez, according to court documents.

He has been indicted on 12 charges stemming from the Capitol insurrection, including civil disorder, death threats and trespassing offenses. He hasn't yet had a chance to enter a plea.

Miller's lawyer Clint Broden told CNN in January that his client "regrets what he did" and that his messages were "misguided political hyperbole" influenced by former President Donald Trump.

He's the latest defendant to challenge his detention after an appeals court ruling on Friday set stricter guidelines for how judges should assess the future dangerousness of alleged Capitol rioters. A federal judge in Texas previously ruled that Miller should be jailed pending trial because he was too dangerous to released, and posed a high risk to Capitol police officers.