Alligators eat lots of things. These prehistoric artifacts were an unusual snack 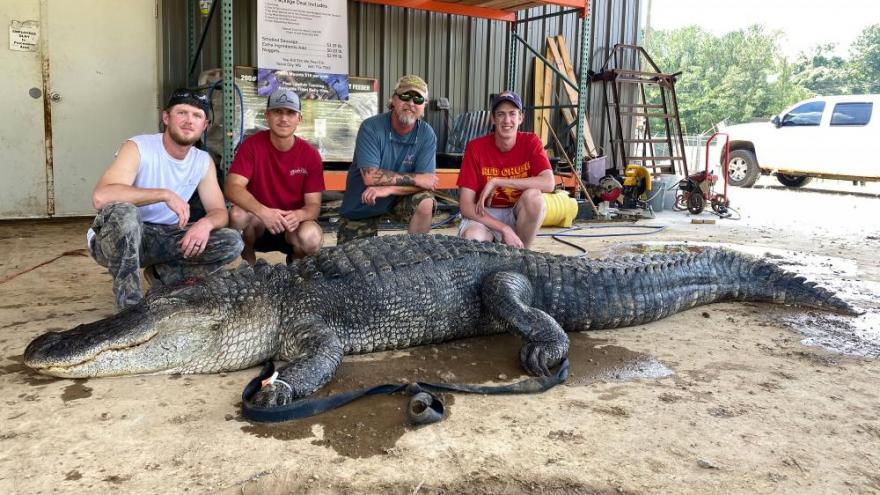 John Hamilton and his hunting party brought in a 13-foot-5-inch alligator with some surprises inside.

(CNN) -- Discovering prehistoric artifacts is amazing enough. But finding them deep in the belly of a massive alligator -- that's something else.

Shane Smith, owner of Red Antler Processing in Yazoo City, Mississippi, was digging through the stomach of a 13-foot-5-inch alligator when he found a couple of objects he just couldn't place. The animal was brought in for processing of its meat and skin.

The items both turned out to be Native American artifacts dating back thousands of years, which he said he later discovered from an expert.

"My first instinct was like, no way. There's no way this is possible," Smith told CNN. "You naturally think that, 'Oh, my gosh, this alligator, either ate an Indian or ate an animal that the Indian shot. But, you know, obviously the alligator is not thousands of years old."

Smith thought the objects -- a projectile point that was part of a hunting tool and something that looked like a fishing lure -- were interesting enough, so he posted about it on the store's Facebook page.

Geologist James Starnes looked at photos of the artifacts and was able to tell quite a bit about their history, based on his research of Native American artifacts found in the Mississippi Delta. Starnes is the director of surface geology and surface mapping for the Mississippi Department of Environmental Quality.

He described the objects as a plummet, which is a tear-shaped metallic object of unknown use, and an "atlatl dart point," which is a spear or dart used for hunting, Starnes said.

"We've had Native American inhabitants in North America, especially Mississippi, going back probably 12,000-plus years," he said. "This technology was the technology that they would have brought with them."

The use of the plummet is "hotly debated" among experts, Starnes said. It looks like a fishing weight or a net weight, which is what some argue it was used for.

But it's made of hematite, an "exotic" material could have come from as far away as the Great Lakes region, Starnes said. Using an object that was so "ornate" for something utilitarian such as fishing seems unusual, he added.

The plummet appears to be from the late archaic cultural period, which was from 1000 to 2000 BC, Starnes said.

The brown-colored rock, which was part of the atlatl dart point, would have served as the base for the hunting tool, Starnes said. He described it as a base with an arrowhead attached at the tip.

"These things were made before the advent of bows and arrows in North America," he said.

Now, the bigger question: How did these artifacts get into a giant alligator's stomach?

Alligators are known for eating all sorts of things. This big one had fish bones and scales, teeth, the bones of small mammals, hundreds of persimmon fruit seeds and rocks, Smith said. The rocks ranged in size from a quarter to a silver dollar, he said.

This alligator was captured September 2 by John Hamilton, who found it in Eagle Lake, north of Vicksburg, Mississippi, Smith said.

Between the gator's captor, Smith and others, the group estimated this alligator was 80 to 100 years old, Smith said.

While the contents of its stomach were something noteworthy, there was one other weird thing Smith recently found in an alligator.

Another large alligator, also found in 2021, had a "45-caliber bullet inside of his stomach," Smith said. "The weird thing about that is the bullet had not been fired from a gun. It was just a clean bullet, so you wonder how it got there."

Finding artifacts of this age is common in this region of Mississippi, says Starnes.

"Since this area was so heavily populated over such a long period of time, artifacts show up in some very unusual places," Starnes said. "They can erode from the surface, or they can be exposed because of things like rain events, construction projects."

The use of stone was popular in the archaic time period, he said.

"You could imagine that one of these sites having this much stone material is just eroding out of the bank, pretty easy pickings for an alligator, especially looking for her, you know, just something to ingest," he said. "Alligators will pretty much eat anything."