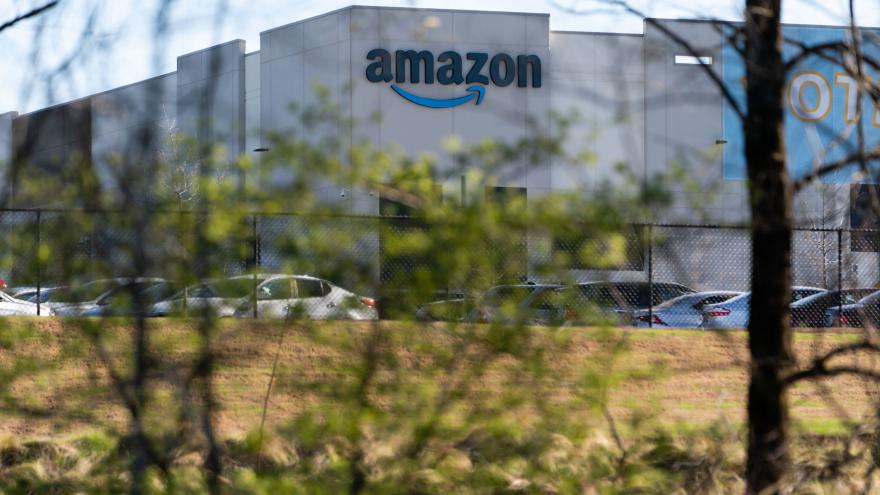 The Amazon fulfillment warehouse at the center of a unionization drive is seen on March 29, 2021 in Bessemer, Alabama. Employees at the fulfillment center are currently voting on whether to form a union, a decision that could have national repercussions. - Elijah Nouvelage/Getty Images

(CNN) -- In most situations, a mailbox is just a mailbox. But in the milestone union election at an Amazon warehouse in Bessemer, Alabama, a mailbox installed earlier this year threatens to upend the whole process -- or at least become a focus for the union if it loses the vote. The public tally began Thursday afternoon.

Just hours before the public counting began, news broke from The Washington Post of emails showing that Amazon had urged the US Postal Service to install the mailbox ahead of the election, an election that could lead to the first US-based Amazon union.

The emails, which were between USPS employees, are partially redacted and were obtained by the union backing the election through the Freedom of Information Act. The union has called for an investigation by the National Labor Relations Board into the matter.

The correspondence, which runs from January to early February, indicates Amazon wanted the USPS to move quickly to set up a mailbox ahead of the start of the election and pushed for updates on the matter from the government. In one email from January 14, a Postal Service employee said, "We have not heard anything back on the install of this collection box. Amazon is reaching out again to me today about the status as they wanted to move quickly on this."

Union elections are typically done in-person with NLRB officials present, but due to the pandemic the NLRB allowed for voting by mail, over Amazon's strenuous objections. That decision led to a great deal of focus on how ballots would be handled. The ballots, which were mailed to the homes of eligible employees, could be cast in any USPS mailbox.

In a statement to CNN Business last month, Amazon spokesperson Heather Knox said "the USPS recently installed a mailbox onsite for the convenience of our employees."

"This mailbox is enclosed in a tent making it convenient, safe, and private for our employees to vote on their way to and from work if they choose to, or use it for any of their other mailing needs. Only USPS can collect the outgoing mail from this box or put incoming mail into it," the statement continued.

Retail, Wholesale and Department Store Union, which is conducting the union drive for the Bessemer facility, had previously raised concerns about the mailbox, saying that Amazon had in text messages encouraged workers to use it to mail their ballots. Labor experts had pointed to the mailbox as one thing the union might use to challenge the election if it loses.

According to the union, the NLRB received 3,215 ballots. When the NLRB stopped counting votes for the evening, the votes were heavily in Amazon's favor, with 1,101 voting against the union and 463 in support. In this election, nearly 6,000 warehouse workers at the one-year-old Bessemer facility were eligible to vote. The count will resume Friday morning.

About 30 minutes before the vote ceased for the day, Stuart Appelbaum, president of the RWDSU, said in a statement: "Our system is broken, Amazon took full advantage of that, and we will be calling on the labor board to hold Amazon accountable for its illegal and egregious behavior during the campaign."

"But make no mistake about it; this still represents an important moment for working people and their voices will be heard," the statement read.

Hours before, Appelbaum specifically called for "an investigation over Amazon's behavior in corrupting the election" in regard to the mailbox situation. "Even though the NLRB definitively denied Amazon's request for a drop box on the warehouse property, Amazon felt it was above the law and worked with the postal service anyway to install one. They did this because it provided a clear ability to intimidate workers," the earlier statement read.

(Concerning its push for an in-person election, the NLRB had rejected Amazon's suggestion to use equipment clearly belonging to the company "such as pass-through boxes or vending machines" noting that it "implies a problematic amount of Employer involvement in election proceedings.")

Appelbaum previously objected to the mailbox, telling CNN Business last month that "everything you do at Amazon you know is surveilled, everything is monitored, and you have every reason to believe that if you mail from that box it is going to be monitored, as well."

In a statement Thursday, Amazon's Knox said, "We said from the beginning that we wanted all employees to vote and proposed many different options to try and make it easy. The RWDSU fought those at every turn and pushed for a mail-only election, which the NLRB's own data showed would reduce turnout. This mailbox—which only the USPS had access to—was a simple, secure, and completely optional way to make it easy for employees to vote, no more and no less."

Amazon, which has previously fended off unions in the United States, waged an online and offline campaign to combat the drive, including posting signage in bathroom stalls and pulling workers into meetings before the start of the election to convey its anti-union stance.

For Amazon, and its workforce, the stakes of the vote are high. A successful union drive in Bessemer could encourage people in the company's warehouses around the country to launch similar efforts, potentially changing how Amazon works with many of its 950,000 US-based employees.

Some Amazon workers in Europe are unionized, but this is the largest effort by US-based Amazon workers to unionize thus far. In Delaware, a small union election was held at a warehouse in 2014 but resulted in workers rejecting representation.