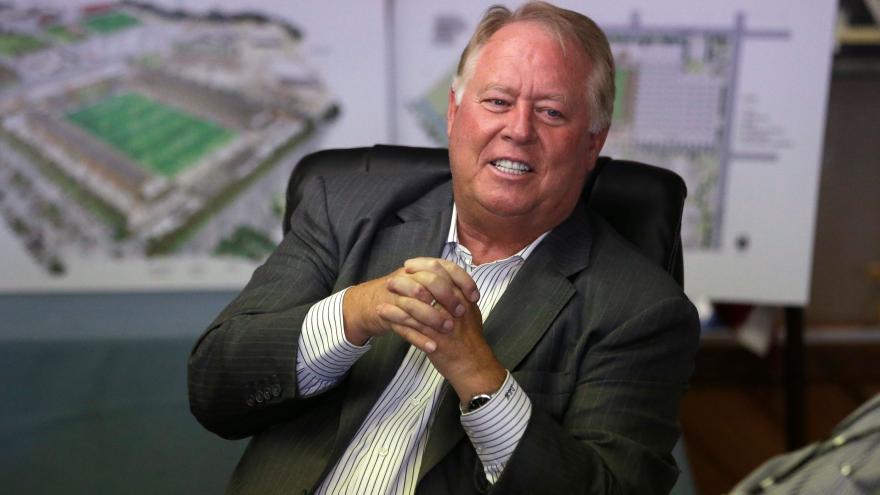 "I recognize that at times I have spoken too quickly, without pausing to consider the feelings or good intentions of others," Hansen said in a statement. "This is not acceptable, and I assume full responsibility for allowing my words to travel unfiltered as to their significance and impact."

He and his wife, Julie, decided the team needed a "new ownership and a refreshed vision," his statement said.

"I believe that communities are strengthened by diversity," he said. "I am truly sorry for offending and being insensitive to the plight of others. I seek to do better and commit to supporting and improving diversity and inclusion in my own community going forward."

Hansen is the CEO and founder of the Wasatch Group, a real estate and holding company based in Logan, Utah. He said he will sell Utah Soccer Holdings, which, in addition to Real Salt Lake, counts Utah Royals FC of the National Women's Soccer League and Real Monarchs of the second-division USL Championship among its holdings.

Former employees and players accused Hansen of using the n-word and calling Black people thugs, according to an article in The Athletic on Thursday. A former intern told CNN affiliate KUTV that he was fired after writing an email to Hansen complaining that an equipment manager had used racist language in 2014.

Julie Hansen defended her husband in texts to KUTV, saying he is "full of love and generosity."

"No one supports equality more than this man. He actually read and gave out 'The New Jim Crow' book in support of Black Lives Matter," she texted, according to the station.

CNN has reached out to Hansen and Real Salt Lake.

The MLS Players' Association last week demanded an investigation and said that if the allegations were true, the league should force Hansen to sell them team. MLS said it was concerned about the allegations and reiterated its zero tolerance policy regarding such actions and behavior.

After the MLS and NWSL launched their probes, Utah Soccer Holdings promised full cooperation, "including seeking to answer any questions the leagues may have about the statements made by Mr. Hansen regarding athlete boycotts and allegations in a resulting article."

The reference to boycotts stems from Hansen's remarks that he felt his players had disrespected him by declining to play Wednesday. Real Salt Lake and Los Angeles FC joined eight other MLS teams in refusing to kick off amid widespread protests over the police shooting of Jacob Blake in Kenosha, Wisconsin.

Sports protests around the world

"It's like someone stabbed you and then you're trying to figure out a way to pull the knife out and move forward," Hansen told a Salt Lake City radio show. "That's what it feels like. The disrespect was profound to me personally."

The protest was particularly disappointing given the effort put forth to prepare Rio Tinto Stadium to host visitors, he said.

The remarks did not sit well with several athletes, including soccer star Jozy Altidore, who said he was part of a group ready to purchase the team, and Utah Jazz guard Donovan Mitchell, who also called for Hansen to sell the team.

Nor did the comments please MLS Commissioner Don Garber, who said he appreciated Hansen's efforts to build the sport at all levels but that his views did not reflect league values.

"This is a time for all of us to work together in the pursuit of racial equality and social justice," Garber's statement said. "Major League Soccer and all of its clubs will continue to support and create initiatives that enact real change."

The league will work with Hansen on his sale of the team, it said Sunday. NWSL Commissioner Lisa Baird applauded Hansen's decision.

"Mr. Hansen's contributions to the league's growth and the continued development of soccer are notable, but we agree that the decision is the right one for the future of the Royals," she said in a statement.

Last year, Real Salt Lake Coach Mike Petke was fired after the team fined and suspended him following accusations he used a homophobic slur toward a referee, according to the MLS and KUTV.

"It is vital that everyone, particularly our leadership, reflects and embodies our core values and the values of our community, treating all people with respect, civility and professionalism," the club said in a statement about Petke's firing. "Throughout our 15-year history, we have championed diversity, acceptance and inclusion throughout our organization, our stadiums and our community. This is a responsibility that we take very seriously."

Petke responded by suing the team on numerous grounds, including breach of contract and defamation, KUTV reported.