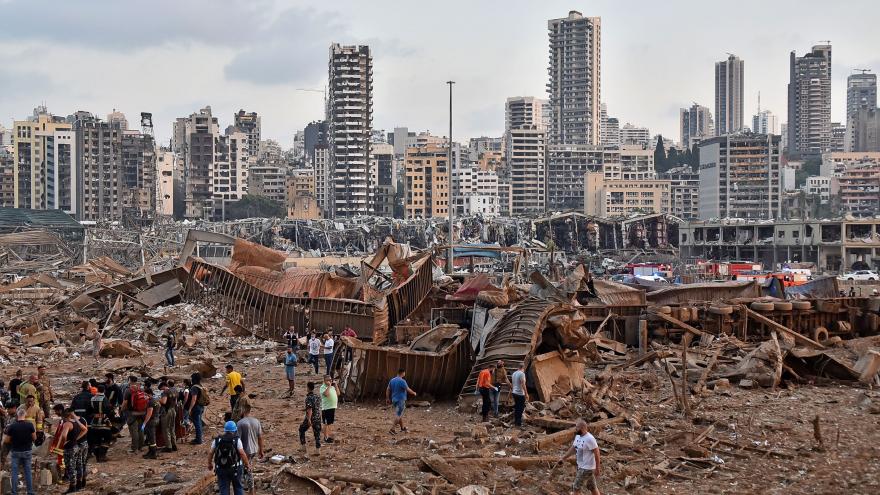 (CNN) -- Beirut was declared a "disaster city" by authorities on Wednesday, in the wake of a huge explosion in the port of the Lebanese capital that left at least 135 people dead and 5,000 injured. The number of deaths is expected to climb amid ongoing search and rescue efforts.

Many people were still missing the day after the Tuesday blast, and 300,000 have been displaced from their homes. The city's emergency services, already under strain due to the Covid-19 pandemic, were operating at decreased capacity after four hospitals were damaged. The explosion's shockwave damaged buildings up to 10 kilometers (6 miles) away.

A warehouse storing thousands of tons of an unsecured and volatile chemical compound has emerged as a possible source of the blast. It's still not exactly clear what led to the ignition that wiped out entire streets, but questions swirled Wednesday over whether the authorities had failed to act on warning signs.

Prime Minister Hassan Diab said that 2,750 metric tons of ammonium nitrate -- typically used as an agricultural fertilizer -- had been stored for six years at a warehouse in the Beirut port without safety measures, "endangering the safety of citizens," according to a statement.

Initial reports in state media blamed the blast on a major fire at a firecrackers warehouse near the port. Later, the country's general security chief Abbas Ibrahim said a "highly explosive material" had been confiscated years earlier and stored in the warehouse, just minutes' walk from Beirut's shopping and nightlife districts.

The Director General of Beirut Port Hassan Kraytem said Wednesday he knew the materials stored "in warehouse number 12" were dangerous, "but not to that extent." Maintenance was conducted on Warehouse 12's door hours before the blast on Tuesday, according to Kraytem.

"Customs and State Security sent letters [to the authorities] asking to remove or re-export the explosive materials six years ago, and we have been waiting since then for this issue to be resolved, but to no avail," Kraytem told the local television channel OTV.

Maritime traffic services and documents obtained by CNN describe a shipment of 2,750 metric tons of ammonium nitrate that was detained in Beirut in 2013. The Russian-owned ship, named the MV Rhosus, was destined for Mozambique but stopped in Beirut due to financial difficulties that also created unrest with the ship's Russian and Ukrainian crew.

The Director of Lebanese Customs, Badri Daher, told CNN that officials had written to legal authorities six times calling for that cargo be removed from the port, but the requests went unheeded.

On Wednesday, Lebanese Information Minister Manal Abdel Samad Najd said there are papers and documents dating back to 2014 proving the existence of an exchange of information about the "material" confiscated by Lebanese authorities. She told Jordan's state-owned channel Al Mamlaka that the exchange is being considered in relation to the potential cause of the deadly Beirut blast.

Asked in a telephone interview if there are any early findings in the investigations related to the cause of the explosion, she said, "There are no preliminary results or clarification."

The Lebanese cabinet has ordered an unknown number of port officials to be placed under house arrest in the coming days, pending the results of an investigation into the blast, according to Ghada Shreim, the minister for displaced people. Those involved in "the storage, guarding and investigating of Hangar 12 from 2014 until today" will be included in the arrests, Shreim said.

Lebanese President Michel Aoun promised a transparent investigation into the causes of the explosion, vowing Wednesday that those responsible would be held accountable and face "severe punishment."

Calls have been growing for an international investigation into the blast. "Former Prime Ministers Najib Mikati, Fouad Siniora, Saad Hariri, and Tammam Salam find it necessary to ask the United Nations or the Arab League to form an international or Arab investigation committee," according to a joint statement released by Hariri's office.

It called for the committee to be "composed of judges and investigators who are professional and impartial to start their duties in uncovering the circumstances and causes of the catastrophe that occurred in Lebanon."

Rights group Amnesty International also called for the formation of an international mechanism to investigate the incident in a statement released Wednesday.

Ammonium nitrate is an industrial chemical commonly used around the world as an agricultural fertilizer, and in explosives for mining. It has also been used as a key component in improvised explosives, notably in the 1995 Oklahoma City bombing, in the 2002 bombings in Bali, Indonesia, and by far-right Norwegian terrorist Anders Behring Breivik in his 2011 shooting and bombing attack.

Following Tuesday's explosion, the United States Embassy in Beirut urged those in the area to "stay indoors and wear masks if available" due to reports of toxic gases released from the blast.

Anthony May, a retired ATF explosives investigator for the US government said, the amount of explosives and the shockwaves created by the blast, "is typical of what would be equivalent to a kiloton nuclear bomb going off as far as the explosive weight is concerned."

"There was no nuclear material that we know of involved in this, but the shock wave generated, the blast wave generated is at equivalent to a small nuclear device," May said.

Immediate concerns remain with the casualties, which are expected to rise further. Following the blast, hospitals in Beirut were overwhelmed with the wounded and doctors conducted triage on dozens of injured people in car parks and sidewalks. Some were so full they were turning people away, one witness said.

"The emergency room looked like a war had begun, the children -- their hands, their legs, I couldn't believe what I was seeing," said Serge Mahdessian, a hairdresser in Beirut.

Open lots turned into makeshift field hospitals as people pulled themselves and their loved ones out of the rubble of their homes. Some had broken limbs, others had been showered with shards of glass. Some patients were unconscious. One of Beirut's major hospitals, Hotel Dieu, received around 400 injured patients, an employee told CNN.

Relatives of the missing are scouring hospitals looking for their loved ones. Lebanese authorities said hundreds were still missing, including children.

Four hospitals are out of service because of damage from the explosion, Health Minister Hamad Hassan said Wednesday, adding that the health ministry has an emergency plan with field hospitals being sent from Qatar, Iran, Kuwait, Oman and Jordan. Hassan estimates that six to eight field hospitals will be ready "soon."

Though Lebanon has only confirmed 5,417 coronavirus cases and 68 related deaths, according to data from Johns Hopkins University, pandemic-related restrictions have further exacerbated the country's deep and long-running financial crisis. Power outages are common in the capital, compounding pressures on basic services to provide for the injured.

The explosion, which happened just after 6 p.m. local time (11 a.m. ET), tore through the city and wreaked havoc on nearly all of Beirut's quarters, registering as a 3.3 magnitude earthquake in the Lebanese capital. A crater created by the explosion appeared to be roughly 124 meters (405 feet) in diameter, or well over a football field in length, according to CNN analysis of a Planet Labs, Inc. satellite image.

Footage captured the injured staggering through streets in the capital; and ambulances, cars and military vehicles packed with the wounded.

One resident said the scenes looked "like an apocalypse," another said the port was "totally destroyed."

"You can see injured people all over the streets in Beirut, glass all over the place, cars are damaged," said Bachar Ghattas, another resident. "It is very, very frightening what is happening right now, and people are freaking out. The emergency services are overwhelmed."

The official residence of Lebanon's President, the headquarters of former Prime Minister Saad Hariri, and CNN's bureau in downtown Beirut were damaged. Homes as far as 10 kilometers (6 miles) away were also damaged, according to witnesses.

The city's governor Marwan Abboud said the scene reminded him of the atomic bomb blasts at the end of the Second World War in "Hiroshima and Nagasaki."

"In my life I haven't seen destruction on this scale," Abboud said. "This is a national catastrophe."

The Lebanese Red Cross implored the public on Twitter for blood donations to help the wounded and said it has opened triage centers and first aid stations to help those with non-critical injuries. All its ambulances across the entire country were dispatched to the capital to support with the rescue and evacuation of patients.

The Philippine Embassy in Beirut on Wednesday confirmed that two of its citizens died in the explosion. Eight other Filipinos suffered injuries, including one in critical but stable condition. Two of the injured were part of a group of 13 Filipino seafarers whose ship was docked "some 400 meters away from blast zone," said the Embassy, who added that the other 11 have been reported as missing.

Four Bangladeshi nationals were killed and nearly 100 others were injured in the explosion, the country's state-run news agency Bangladesh Sangbad Sangstha (BSS) reported.Among the injured were 21 members of the Bangladesh Navy, who were on duty at the port as part of the United Nations peacekeeping mission, BSS said, adding that one of the navy personnel is in critical condition.

Australian Prime Minister Scott Morrison said at least one Australian was killed in the blast and the Australian Embassy building has been "significantly compromised."

Six Turkish citizens, a Chinese citizen, a Japanese national and an Indonesian were also injured, according to their respective governments.