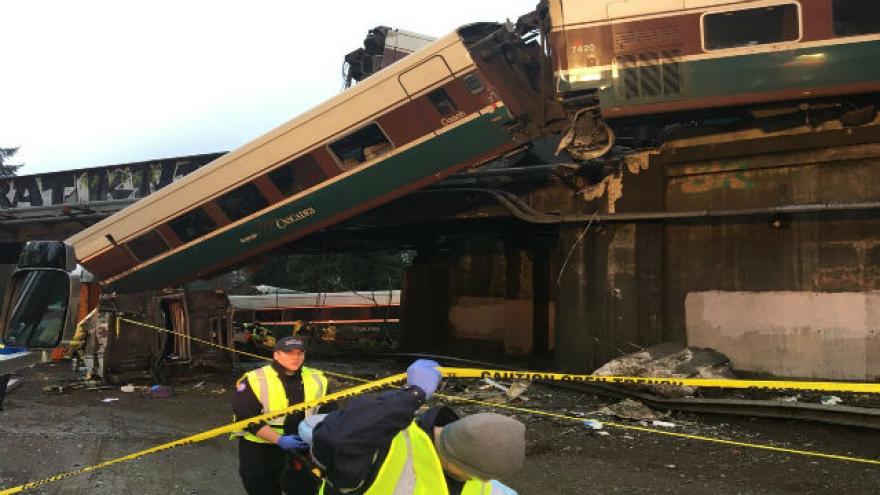 (CNN) -- The Amtrak engineer on the train that derailed last month in Washington state told investigators he mistook a signal and braked moments before the deadly crash, according to the National Transportation Safety Board.

The Amtrak Cascades Train 501 derailed December 18 near DuPont, Washington, and hurtled off an overpass onto Interstate 5, killing three people and injuring dozens more.

The safety board said Thursday that the 55-year-old engineer, who was interviewed last week after suffering serious injuries in the crash, told the agency the train was traveling at about 80 mph as it passed milepost 15.5 on its inaugural journey from Seattle to Portland, Oregon.

The locomotive engineer was promoted to his position in 2013 after being hired as a conductor nine years earlier. He told the NTSB he planned to start braking about a mile before an upcoming curve with a 30-mph speed restriction at milepost 19.8.

The engineer said he saw mileposts 16 and 17, the NTSB said. But he did not recall seeing milepost 18 or the 30-mph advance speed sign two miles before the curve.

"The engineer said that he did see the wayside signal at milepost 19.8 (at the accident curve) but mistook it for another signal, which was north of the curve," according to the NTSB.

The engineer saw the 30-mph sign at the entrance to the curve and applied the brakes shortly before the train derailed and tumbled off the overpass as it entered the curve, the NTSB said.

The agency said in December that the engineer "made a comment regarding an over speed condition" about six seconds before the derailment.

The train conductor, who also suffered serious injuries, told investigators he was looking down at "general track bulletins" moments before the crash. He said he heard the engineer mumble something, looked up and sensed the train had become "airborne," according to the NTSB.

The safety board said the accounts of the two men will be compared with video from locomotive cameras as well as data recorder information and other sources.

The investigation could take up to two years.

The NTSB has said that technology called positive train control, or PTC, which can automatically slow down a speeding train, was not yet functional on the locomotive.