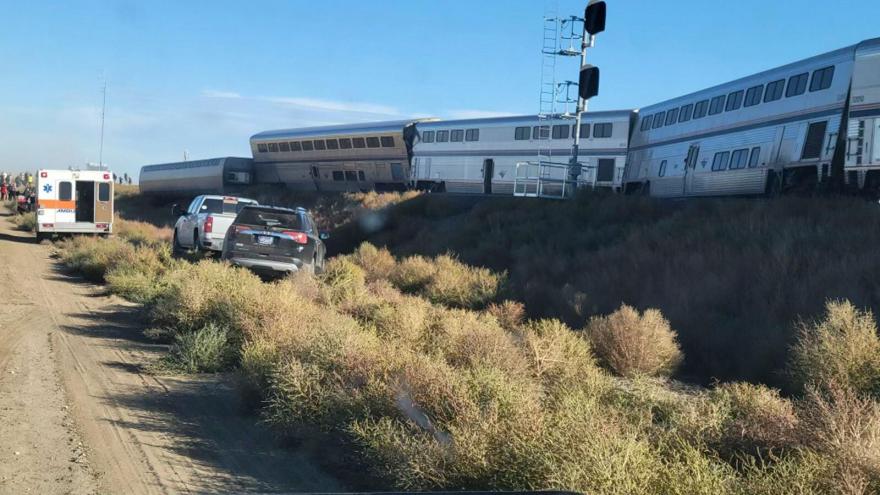 In this photo provided by Kimberly Fossen an ambulance is parked at the scene of an Amtrak train derailment on Saturday, September 25, in north-central Montana. Multiple people were injured when the train that runs between Seattle and Chicago derailed, the train agency said.

(CNN) -- An Amtrak train traveling from Chicago to the Pacific Northwest derailed in a remote part of Montana on Saturday afternoon, killing three people and hospitalizing five others, authorities said.

Eight cars from Amtrak's Empire Builder train 7/27 headed westbound to Seattle/Portland derailed at about 4 p.m. near Joplin, Montana, a town around 30 miles south of the Canadian border with a population of about 150 people, Amtrak said.

The train consisted of two locomotives and 10 cars and there were about 141 passengers and 16 crew members on board, Amtrak said in an additional statement Sunday, clarifying previous figures provided.

"We are deeply saddened to learn local authorities are now confirming that three people have lost their lives as a result of this accident. There are also reported injuries among the passengers and crew members travelling on the train. Amtrak is working with the local authorities to transport those who were injured to medical care, and to safely evacuate everyone else at the scene," said the statement.

The injured people are being treated at Benefis Hospital in Great Falls, while others who were injured have been treated and released from a variety of local hospitals, said Sarah Robbin, the disaster and emergency services coordinator for Liberty County.

Amtrak has activated an Incident Response Team and "are sending emergency personnel and Amtrak leadership to the scene to help support our passengers, our employees and their families with their needs," the statement said.

Megan Vandervest, a passenger on a sleeper car on the train, had been taking a nap when the derailment jolted her awake on Saturday.

"I would describe the experience as kind of extreme turbulence on an airplane but louder, and there was kind of a lot of smoke smell. The first thought I really had when I woke up was, 'Oh my God we're derailing,'" she told CNN.

"It was probably 10 or 15 seconds of rocking back and forth and tons of noise, and then we came to a stop. Really we didn't know what was going on for a couple minutes."

She said she was evacuated within 10 minutes of the incident and only then understood the extent of the damage.

"We kind of thought maybe the car behind us had slightly come off or something like that, but it ended up being much, much worse and a lot more jarring to see when we got off the train," she said. "The car behind ours was slightly off and then the one behind that was kind of in between two sets of railroad tracks, and the one behind that one had like completely tipped over and fallen over and that was kind of the most shocking part."

Injured passengers were taken by ambulance to the towns of Havre, Shelby, Great Falls and Fort Benton, and those who were in critical condition were flown for treatment, said Amanda Frickel, the disaster and emergency services coordinator for Hill County, Montana.

"The passengers that were able to be transported from the derailment to the shelters were accounted for, fed, (and) given meds if theirs were lost or missing," Frickel said in a text message to CNN. "Then they were safely bussed to Shelby MT for the evening."

The National Transportation Safety Board is sending a "Go Team" to investigate, the agency said Saturday night.

The Empire Builder travels between Chicago-St.Paul/Minneapolis-Spokane-Portland/Seattle, according to Amtrak's website, and offers passengers a chance to "experience the rugged splendor of the American West."

"Traveling between Chicago and the Pacific Northwest along major portions of the Lewis and Clark Trail, the mighty Empire Builder takes you on an exciting adventure through majestic wilderness, following in the footsteps of early pioneers," the website adds.

Correction: An earlier version of this story misspelled the last name of Megan Vandervest.