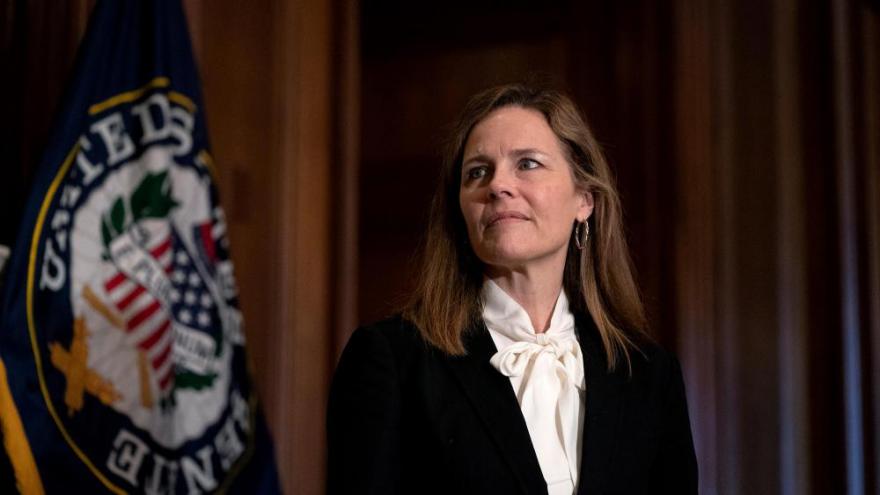 (CNN) -- Judge Amy Coney Barrett failed to disclose two talks she gave in 2013 hosted by two anti-abortion student groups on paperwork provided to the Senate ahead of her confirmation hearing to become the next Supreme Court justice.

Barrett, President Donald Trump's nominee to succeed Justice Ruth Bader Ginsburg, gave the talks -- a lecture and a seminar -- in 2013 in her capacity as a law professor at the University of Notre Dame. The seminar was co-sponsored by the school's Right to Life club and constitutional studies minor, and the lecture was held by the law school's Jus Vitae club. CNN's KFile found advertisements for two lectures on social media and in a weekly Notre Dame faculty newsletter.

It is not known what was said in the two events, though both centered on abortion court cases. In a separate instance, CNN's KFile found a publicized talk that Barrett gave to coincide with the 40th anniversary of Roe v. Wade -- a seminar Barrett disclosed in her Senate paperwork -- was removed by the university from YouTube in 2014. A school spokesman told CNN the video is now lost.

Barrett's confirmation to the Supreme Court would strengthen its current conservative majority -- creating a 6-3 bloc of conservative justices -- and could limit abortion access.

Barrett's failure to disclose the two events also raises questions about whether the questionnaire is complete or whether there will be any consequences from the Republican-led Senate Judiciary Committee, which oversees her confirmation hearing. Past chairmen of the powerful committee have halted the nomination process after judicial nominees omitted information in their Senate paperwork but under committee Chairman Lindsey Graham that scenario is unlikely.

The committee has slated a hearing for Barrett on October 12 in an effort to confirm her by the full Senate before the election.

Senate Democrats on the Judiciary Committee sent a letter to the Justice Department this week that said Barrett did omit materials concerning Roe v. Wade and asked if Barrett omitted any more materials after the National Review reported that Barrett signed a letter on a "right to life" ad in 2006 that called for the end of the landmark legal decision.

White House spokesperson Judd Deere told CNN in an email, "Judge Barrett submitted her lengthy Senate Judiciary Questionnaire, spoke with an overwhelming majority of the Senate Judiciary Committee, and continues to be transparent throughout her confirmation process. She looks forward to answering questions from the Senators next week."

CNN reached out multiple times to Barrett through her law chambers but did not get a response.

In 2016, the group sent a letter asking the university to rescind an award honored to then-Vice President Joe Biden in recognition for his work as an American Catholic. The group called it "a scandalous violation of the University's moral responsibility (as the American bishops wrote in 2004) never to honor those who act in defiance of fundamental moral principles about the sanctity of life" and attacked his views on abortion.

In April 2013, Barrett gave a small hour-long seminar "for students on changes to law and life for women after Roe v. Wade" entitled "Being a Woman After Roe."

According to a copy of the Facebook event advertising the seminar, spots were limited to 15 students. A student publication promoted the event as an informal seminar, small group setting in which students can learn more from faculty members who oppose abortion.

"The Right to Life Seminar Series was begun as an opportunity for students and professors to discuss a variety of issues related to human life and dignity," an advertisement for the event reads.

The conservative judge also did not disclose that in November 2013 she spoke to Jus Vitae, the law school's Right to Life club, on "The Supreme Court's Abortion Jurisprudence." The law schooladvertised the lecture as focusing on Roe v. Wade and the cases that followed it, including cases that were being litigated on the lower courts at that time.

The lecture Barrett did disclose was entitled "Roe at 40: The Supreme Court, Abortion, and the Culture War that Followed," taking place in January 2013 and open to the university community. It was co-sponsored by the university's Constitutional Studies minor.

However, video for the lecture, which CNN's KFile found on the Internet Archive's Wayback Machine was advertised by the school as being available on YouTube, was removed by the user in 2014, according to a YouTube spokesperson.

Of 11 lectures publicized as available to watch on the school's event, only Barrett's was removed from YouTube.

After CNN inquired to obtain video of the event, a university spokesperson, Dennis K. Brown, told CNN, "We have checked with the organizer of the event [sic] have no information on what has become of the video of that lecture."

Several on-campus publications covered the event and Barrett's remarks at the time.

The Observer, Notre Dame's student newspaper, wrote that Barrett said, ''I think it is very unlikely at this point that the court is going to overturn Roe as curbed by [Planned Parenthood v.] Casey. The fundamental element, that the woman has a right to choose abortion, will probably stand," she said.

The Irish Rover, a student publication covering Catholic identity, quoted Barrett as saying, "whether or not Roe gets overturned is irrelevant," saying the question of abortion would return to the state level and could still be legal in certain states.

As Barrett gave talks on abortion to groups associated with the on-campus Right to Life groups, Barrett was also a member of the university's chapter of the University Faculty for Life from the group's founding in 2010 until 2016, according to her Senate paperwork.

While she was a member of the group, the group unanimously passed a resolution for a letter calling on the university to rescind an award given to then-Vice President Biden because of his beliefs on abortion.

"Notre Dame claims to award the Laetare Medal 'annually to an American Catholic in recognition of outstanding service to Church and society,'" the letter reads. "But our Faculty for Life Chapter agrees with Bishop Kevin Rhoades that the awarding of the Laetare Medal to Vice-President Biden is a scandalous violation of the University's moral responsibility (as the American bishops wrote in 2004) never to honor those who act in defiance of fundamental moral principles about the sanctity of life."

The faculty letter attacks Biden's position on abortion for not wanting to "impose" the Catholic Church's teachings on abortion upon a woman or a doctor, supporting the death penalty and for rejecting "the truth that human life begins at conception." It also states that public officials like Biden have "an especially grave duty to preserve" life.