An 11-year-old girl fought off a knife-wielding man who tried to kidnap her at Florida school bus stop, sheriff says 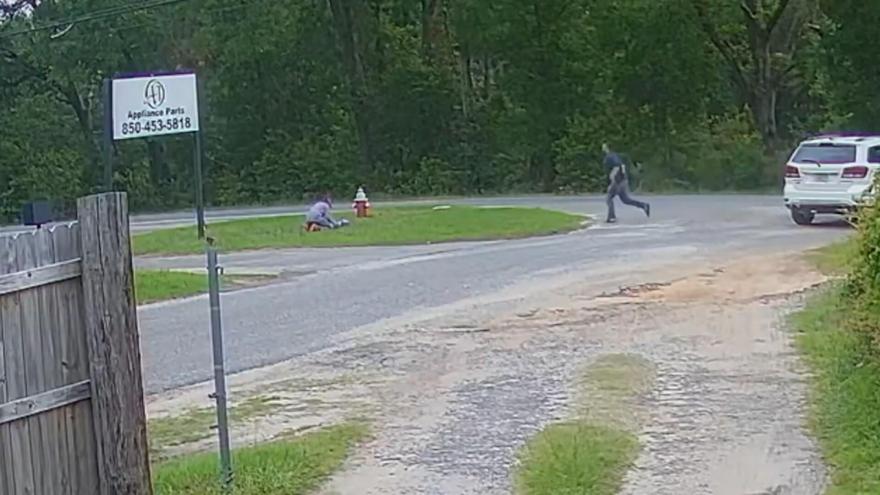 An 11-year-old girl was able to fight off an attempted kidnapper in Pensacola, Florida. The Sheriff's Office released surveillance video of the incident.

(CNN) -- An 11-year-old girl waiting for her school bus in Pensacola, Florida, was able to fight off an alleged kidnapping attempt on Tuesday morning and get to safety, authorities said.

A 30-year-old suspect was arrested later that day after a search involving at least 50 deputies and other personnel, Escambia County Sheriff Chip Simmons told reporters at a news conference Tuesday evening.

Surveillance video released by the sheriff's office shows the girl kneeling on the grass at the bus stop on Tuesday morning when a white Dodge Journey SUV stops on the side of the road. The video then shows a man getting out of the car and running toward the girl.

Simmons said the man was holding a knife.

The video shows the girl trying to run away before the man grabs her and starts carrying her toward the vehicle. There is a struggle and the girl breaks free from the suspect's grip when they both fall to the ground. The girl can be seen running away as the man hurries back to his car and drives off.

Investigators were able to get the vehicle's license plate number and identify several places where the suspect might be, Simmons said.

They arrested Jared Paul Stanga, who is charged with attempted kidnapping of a child under 13, aggravated assault with a weapon and simple battery, according to the sheriff's office.

It is unclear at this time if Stanga has an attorney. He is scheduled to make a video appearance on Wednesday according to Escambia County online court records.

Simmons said that the girl was playing with blue slime at the time of the kidnapping attempt and they found the same slime on Stanga's arm when he was arrested. He said that the silver bumper of the car allegedly used in the attempt had been freshly painted black.

Simmons said the victim told authorities that the same man had approached her about two weeks ago at her bus stop and made her feel uncomfortable.

The victim has a few scratches and some mental trauma from her experience, but Simmons said she is working through that with her mother. He urged parents and teachers to talk to their children about bus stop safety.