An 8-year-old boy with coronavirus antibodies went into cardiac arrest. His brother's CPR saved his life 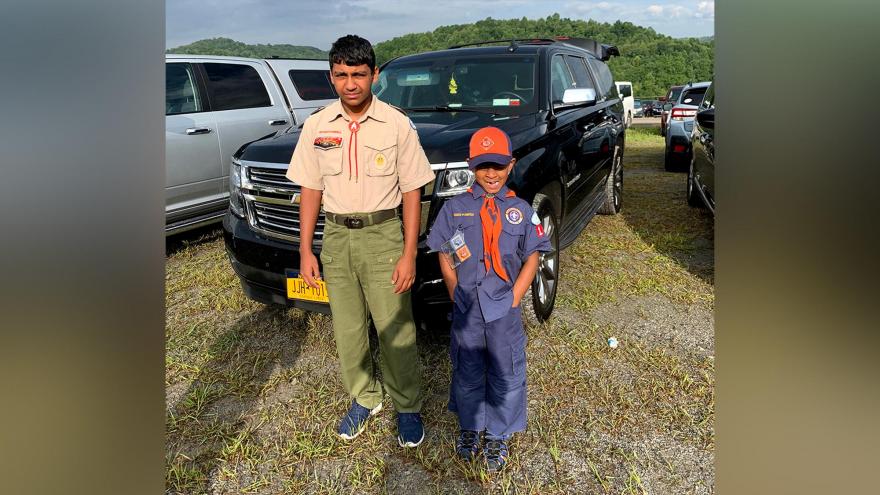 A 15-year-old boy performed CPR on his brother when he went into cardiac arrest.

(CNN) -- An 8-year-old boy was rescued by his teen brother's quick thinking after going into cardiac arrest at home, his family says, following what doctors told them was a coronavirus-related condition.

Jayden Hardowar in Queens, New York, came down with a mild fever in late April and seemed to show he had recovered, his father told CNN's Anderson Cooper Wednesday. But shortly after, he came down with an upset stomach and three days later, collapsed.

Tyron, the boy's 15-year-old brother, performed CPR he learned as a Boy Scout and helped keep Jayden alive until first responders arrived and used a defibrillator to revive him, Roup Hardowar, the boys' father said.

"I was very nervous. I had all these thoughts going through my head, but then I told myself I need to put them aside and I need to focus," Tyron told CNN.

"Once I saw him take a deep breath I was, like, 'I'm doing something right,'' he said. "I'm very happy that, you know, I made an impact on his life."

Jayden, who his father says is now back home and recovering, tested negative to the virus but positive to antibodies. He stayed in the hospital for nearly two weeks and is still not yet able to communicate, Roup Hardowar told CNN.

Hardowar said when his son presented the fever, they consulted with a pediatrician who suggested it was the flu, since the boy was not showing any other coronavirus related symptoms.

He said they have no idea when their son may have gone through the coronavirus and whether it could have been weeks ago, while he was still in school.

"This is the mystery of what's happening with the kids today," Hardowar said, adding that doctors told them an underlying condition the boy had may have been "compromised as a result of the coronavirus."

But the parents had no idea he may have had the condition.

"We never knew this. And it's an underlying condition that just came about right now and the doctors believe it's as a result of the virus," he said.

Because of the many unknowns, Hardowar says parents should take seriously any signs, even if they think those are not virus-related.

"At one point we (knew) that only adults and the elderly we should look at but I would say today that's not the case," Hardowar said. "We have to look at our kids and look at all the signs that are coming along. The signs are no longer Covid-related signs. They can be anything that you have to take very (seriously)."

A mystery illness reported in children

Meanwhile, officials across the US have raised an alarm in the past week of a mysterious coronavirus-related illness that is showing up in kids.

Doctors warned Wednesday that parents and hospitals should expect to see more of the condition that seems to be affecting children who may have already had the virus.

The condition appears to be a post-viral syndrome, said Dr. Jeffrey Burns, a critical care specialist at Boston Children's Hospital who has been coordinating a global group of doctors who compare notes on the condition.

Doctors are investigating cases in at least 150 children, most of them in New York.

"This multisystem inflammatory syndrome is not directly caused by the virus," Burns told CNN. "The leading hypothesis is that it is due to the immune response of the patient."

Symptoms of that condition include persistent fever, inflammation and poor function in organs such as the kidneys or heart. Children may also show evidence of blood vessel inflammation, such as red eyes, a bright red tongue and cracked lips, said Dr. Moshe Arditi, a pediatric infectious diseases expert at Cedars-Sinai Medical Center in Los Angeles.