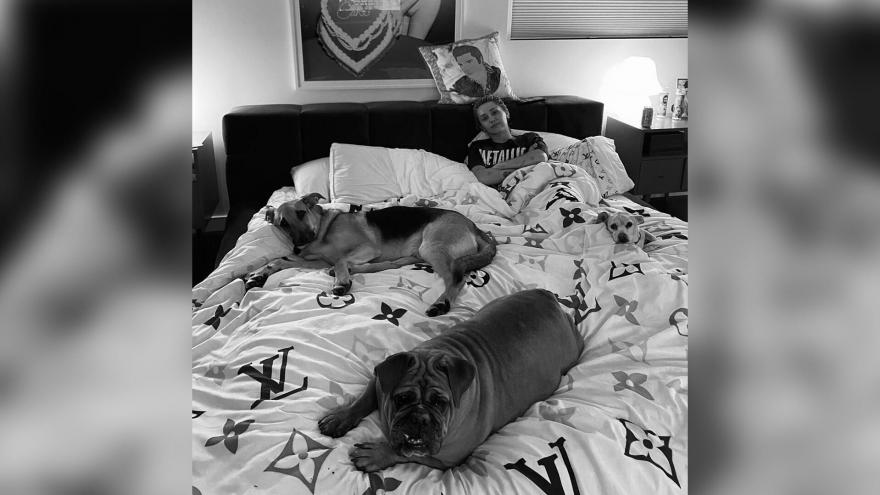 The renamed bulldog lounges at her new home with singer Miley Cyrus.

(CNN) -- An abandoned bulldog who captured the hearts of California firefighters has found a forever home with singer and actress Miley Cyrus.

When Daisy the bulldog showed up at the doorsteps of a North Central Fire Protection District Station 58 in Fresno, California in late April, she was extremely dehydrated and skinny.

"The crews said she was covered in fleas and smelled really bad. You could tell she had been out wandering for quite a while," Jacob McAfee, the station's deputy fire chief, told CNN. "It was obvious that she was abandoned or a stray."

No dog had ever come to the fire station seeking help before, so the crew waited for the stray to leave. But Daisy never left.

The bulldog camped out at the back of the station for about a week, sleeping on the doormat that leads right into the fire station. Although suffering from poor health, the dog made sure to greet the firefighters as they left for their calls.

"It was kind of fun ... after a while every time they left on a call, the dog would run around to the front of the station where the fire engine pulls out and watch them leave for the call and follow us all around the station," said McAfee.

Eventually, the firefighters realized they had to help their new friend find a home.

A relative of one of the captains at the station agreed to foster Daisy for a few months, but it became difficult to find the dog a permanent home with all the medical issues she faced. That's when her journey led her to The Wagmor Hotel and Pet Spa in Los Angeles for adoption.

"As soon as we saw her, we knew we had to get her right to the vet," said Melissa Bacelar, owner of the pet spa and adoption agency. "She had skin issues and eye issues and hip issues. She was a mess."

After nursing her back to health, the agency started to post photos of the pooch to its Instagram page to find her a home. Daisy, a true underdog, was not getting as much interest as expected. She had many fans, but no one wanted to adopt her.

Finally, a potential owner reached out -- Miley Cyrus. The singer had adopted dogs from the agency before.

Since the singer had recently adopted a puppy, she asked to bring the bulldog to the set of her music video for the song "Midnight Sky" to see if anyone was interested. However, Cyrus already started to feel the love and recognize that Daisy was special, according to Bacelar.

The star asked to keep the dog for a weekend. A weekend turned into a week, and soon a month. Within this time, Cyrus, a dog lover and advocate, helped improve Daisy's health. She took the dog to a couple specialists, changed her diet and medications and continued to reach out to several family and friends searching for a permanent home.

However, Cyrus realized the loveable bulldog had already found a home. It was with her. The singer adopted Daisy in early August and renamed her Kate Moss.

"Miley texted me and said, 'This dog doesn't leave my side. I don't know how I would ever not have her. She's mine,'" Bacelar said.

Now, Kate, formerly known as Daisy, is "loving life and getting the royal treatment," according to Bacelar.

"Literally this dog went from living on a mat in front of a fire station in Fresno to living on Louis Vuitton sheets with Miley," said the adoption agency owner.

The firefighters were amazed by the dog's journey as well.

"It's symbolic that she stopped at a firehouse, you know," said McAfee. "Our members took care of her and she ended up having kind of a Cinderella story."