An African-American girl says her white classmates cut her dreadlocks 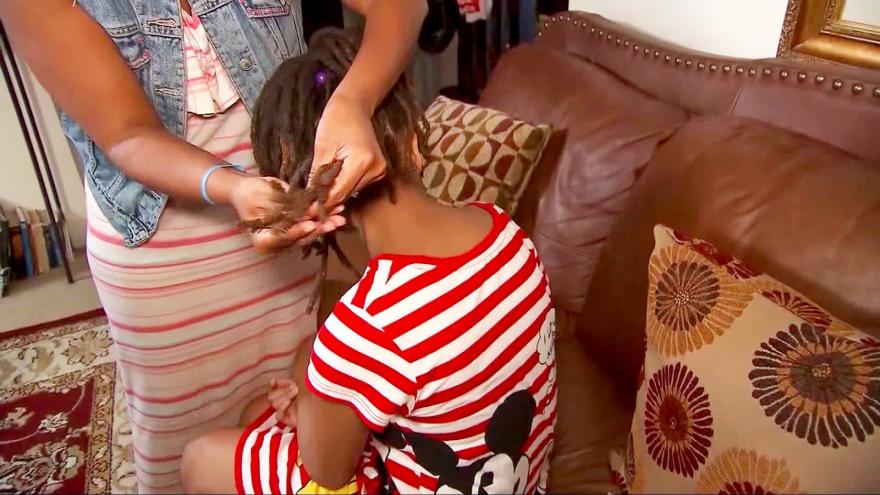 (CNN) -- A 12-year-old African-American girl says three of her white male classmates pinned her down and cut several of her dreadlocks.

The girl, Amari Allen, tells CNN that three white boys at Immanuel Christian School in Springfield, Virginia, pinned her on Monday to a playground slide.

They held her hands behind her back, Amari said, covered her mouth and clipped her hair, calling it"ugly" and "nappy."

"They were saying that I don't deserve to live, that I shouldn't have been born," she said.

She said one of the boys had scissors, and all three are in her class.

When the bell rang to call students back inside, "they ran off laughing... I just got myself up," she said.

"I didn't know that these things still exist," she said. "We are in 2019 and these are things that I've either read about or heard about in my grandparents' or my mother's generations. It's painful.

"She was targeted because she was different. ... Words will kill. Words have deep scarring."

The Fairfax County Police Department is investigating and a police report was filed, spokesman Sgt. James Curry told CNN on Friday. He declined to comment further because the case is ongoing.

Authorities will not release the police report, Curry said. It's unclear whether there were eyewitnesses to the incident.

All parties involved in the incident will be out of school while police conduct the investigation, the school told CNN.

School officials were "deeply disturbed by the allegations being made" and were in touch with Amari's family, Immanuel Christian Head of School Stephen Danish told CNN in a statement.

"We take seriously the emotional and physical well-being of all our students, and have a zero-tolerance policy for any kind of bullying or abuse," he said, adding that the school "also reached out to law enforcement to ask them to conduct a thorough investigation."

Further inquiries, he said, should be directed to police.

Vice President Mike Pence's wife, Karen Pence, teaches art part-time at the school. It garnered national attention earlier this year when it was revealed that the school has a policy banning gay students and parents.