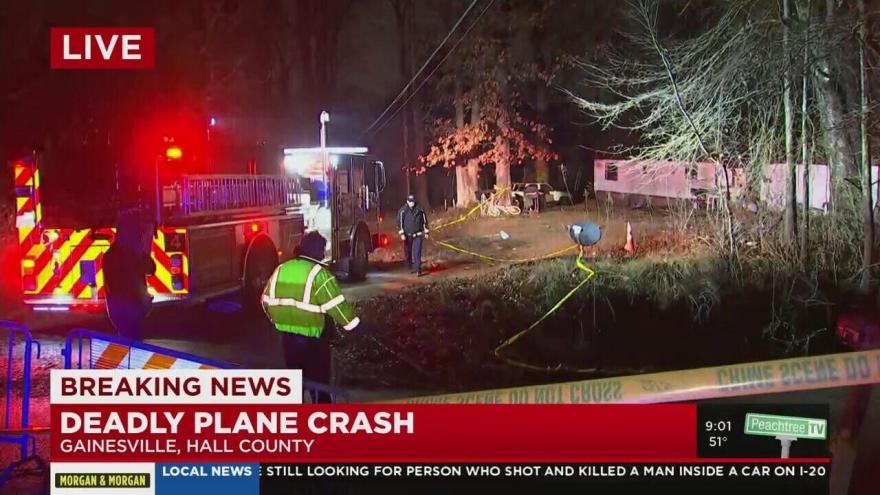 Three people were killed Friday when their single-engine plane crashed into a ravine shortly after takeoff in Gainesville, Georgia, officials sai

(CNN) -- Three people were killed Friday when their single-engine plane crashed into a ravine shortly after takeoff in Gainesville, Georgia, officials said.

The victims are Dan Delnoce, 44, and Courtney Flanders, 45, both of Gainesville, and Matthew Delnoce, 49, of Ohio, the Hall County Sheriff's Office said Saturday.

The bodies of the three victims were taken to the Georgia Bureau of Investigation Crime Lab for autopsies, according to sheriff's office.

The flight was headed to Daytona Beach, Florida, Brackett said.

Gainesville is about 60 miles northeast of Atlanta and the county seat of Hall County.

Part of the plane's wing fell into the bedroom of a mobile home near the crash scene as the family living there ate their dinner, said Gainesville Fire Division Chief Keith Smith at a news conference.

"The occupants of the trailer were actually having dinner at the time when the wing came through their roof and landed in one of the bedrooms," Smith said. "Thankfully, no one was in the bedroom at the time."

A 911 call came in shortly after 6 p.m. from a passerby who noticed debris on the roadway and saw more plane debris when they looked into the wooded area across the street, according to Smith.

The debris field extends about a quarter to a half-mile, Brackett told CNN in an email. Brackett said that five people were displaced in the incident due to fuel falling on their home but were not injured.

The National Transportation Safety Board sent an investigator to the crash scene, the agency said in a tweet Saturday.

The FAA also will investigate the crash, Duncan said.