An alligator slammed into the side of a kayak, tipping the boater into the river 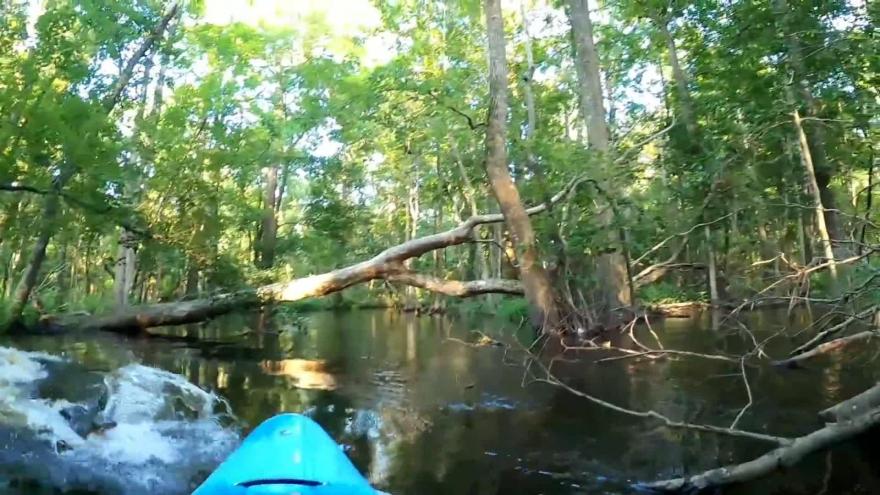 Pete Joyce says he saw the alligator's head to his left when it was about 3 feet away from hitting his boat.

(CNN) -- A kayaker exploring a section of a North Carolina river found more than he expected when an alligator slammed into his boat.

Pete Joyce was paddling in a swampy section of the Waccamaw River on Sunday when the alligator charged at him. The impact tipped him over into the water, but he was able to grab onto some tree branches to avoid the boat being turned upside down.

Joyce, an experienced kayaker, was wearing a video camera on his chest, which caught the whole encounter.

"The video doesn't really do justice to the impact because it hit hard enough that it was able to displace my balance and that's where I started to roll," he said.

At first, Joyce thought it was a fish jumping near the bank.

"When it was about three feet from the side of the boat is when I actually got a good look at the head," he said. "Not enough time to really react, anyway.

Joyce, who's a firefighter and paramedic, didn't see the alligator after the collision, but could feel it brush against the bottom of his boat as it swam by.

Once he righted himself, he hit the side of his kayak three times, hoping that might scare the reptile away."

He took some long deep breaths and then grabbed his paddle and got out of the area as quickly as he could, in case the alligator was chasing him.

"That's what I thought about was that the thing was going to go for a second hit or something," he said.

Alicia Davis, an alligator biologist with the North Carolina Wildlife Resources Commission, said the alligator was probably scared too and took off in the other direction.

Alligators are pretty active during this time of year, because the mating season is over and females are tending to their nests, she said.

She said it's also possible that Joyce startled the alligator and it swam into the boat by mistake.

Alligators usually pose little threat to humans, Davis said, adding that the biggest problems come when people feed them or let pets get too close to the edge of the water.

Joyce said he's planning to kayak the whole 140-mile-long Waccamaw River, which runs from North Carolina into South Carolina. He's doing it in segments, so he says he'll wait to tackle that section until winter when the alligators are dormant.

He said he'd gotten a little complacent about alligators because he sees them all the time when he's kayaking and even on the golf course near his house.

"I have a different appreciation of the animal," he said. "I mean once it comes after you one good time you look at it a little differently."