An Amazon delivery driver saved a drowning dog during his shift 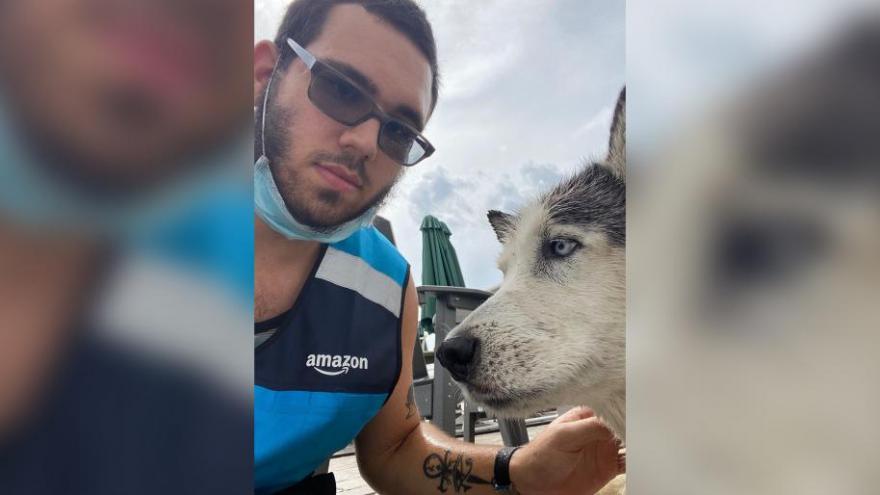 An Amazon delivery driver saved a drowning dog during his shift.

(CNN) -- To say that John Cassabria is an animal lover is an understatement. He grew up surrounded by pets and is currently the proud owner of four dogs, four cats and even a pet snake.

But nothing could have prepared him for the events that transpired on one sweltering August day when Cassabria's routine shift delivering packages for Amazon led to a heroic rescue that saved the life of a 14-year-old husky named Luka.

Cassabria, 24, was making his rounds in Woburn, Massachusetts, when he suddenly took a wrong turn. He stopped his van to reroute his GPS tracker when he heard an eerie noise coming from a yard nearby.

"I've never heard anything like that in my life," he told CNN. "I actually heard it over the reversing beep of my van."

Cassabria was intrigued, so he followed the noise -- which eventually led him to a yard with a fence. A quick look over the fence not only extinguished his curiosity but replaced it with a feeling of fear.

"I saw a dog -- the dog being Luka-- barely standing in the pool,'" Cassabria said. "My heart sank as if I was watching an ASPCA commercial from 2005 when they played Sarah McLachlan's 'Angel."

In a moment of quick thinking, he leapt over the fence and hurried to the dog whose head was barely sticking out of the water.

"I dove into the pool with my shoes, wallet, car keys-- the whole nine," he said. "And I swam with him (Luka) in my arms the best I could hold him from the midway point of the pool to the shallow end and hoisted him and myself out of the pool."

He quickly pulled out his phone and managed to get in contact with the Woburn Police Department. By sheer luck, the animal control officer dispatched by the department lived close by and knew the owners.

Julie Caldwell was savoring the first moments of her weekend away from home when she got the news.

"I was enjoying my first cocktail at The Cape when my husband's phone rang," Caldwell told CNN. "It was the Woburn Police number."

The police department confirmed her identity over the phone and told her Luka had gotten out of the yard. Caldwell was confused -- she had closed the gate before she had left and knew that her dog was too old to attempt such a feat.

Moments later, she got another call and this time it was from a familiar number. The animal control officer and fellow neighbor recounted Cassabria's heroic efforts to save Luka.

She says she was shocked that Luka was ever near the pool at all.

"We have a doggie door and he's used that doggie door for 15 summers," said Caldwell. "He goes outside, goes right to the bathroom, and normally goes back in and stays in the air conditioned house."

Earlier that day, she had arranged for a neighbor to look after her dog while she was away, but in the time between her departure and the arrival of the neighbor, her dog had jumped in the pool.

"This came as a complete shock to us," she said.

When Caldwell finally got on the phone with Cassabria, she said she "thanked him up and down." She even wrote an email to Amazon CEO Jeff Bezos informing him that one of his employees had saved her beloved dog.

"I can't thank him enough," Caldwell wrote in the email, a copy of which an Amazon spokesperson shared with CNN. "Words cannot express how grateful we are to him. In fact, I have tears in my eyes as I write this email. Luka is doing fine thanks to your wonderful and courageous employee."