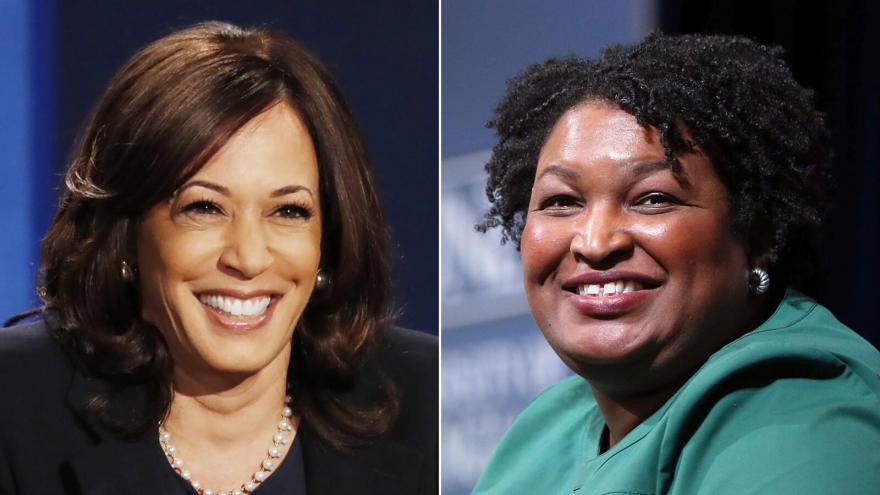 An HBCU grad, Stacey Abrams, galvanized voters in Georgia and to help propel Kamala Harris into history as vice president-elect.

(CNN) -- Before Kamala Harris and Stacey Abrams broke barriers in the country's political landscape, they thrived at historically Black colleges and universities.

Students and alumni from HBCUs around the country are celebrating the vice president-elect's success, hoping it will change the misconceptions around the institutions' quality of education and graduates' social mobility.

Harris, a Howard University alumna, has regularly credited her education and even referred to it when she accepted the Democratic party's vice presidential nomination.

"When you attend an HBCU, there's nothing you can't do," Harris tweeted last month.

But she's only one of several female politicians and activists who have become trailblazers, years after attending HBCUs. Abrams, the former Georgia gubernatorial candidate, attended Spelman College in Atlanta and Keisha Lance Bottoms, the Atlanta Mayor and a surrogate for the Biden-Harris campaign, went to Florida A&M University.

"This is certainly symbolic of the great possibilities that can happen in America," Elwood Robinson, chancellor for Winston-Salem State University, told CNN affiliate WXII.

There's more than 100 HBCUs across the country, according to the National Center for Educational Statistics. Most of them were formed after the Civil War to provide educational opportunities for newly freed slaves.

While they represent about 3% of the higher education institutions, at least 17% of bachelor's degrees by African Americans are earned at HBCUs, according to the United Negro College Fund, a Washington-based national group that awards college scholarships and supports HBCUs.

It should not be a surprise that HBCUs students and alumni, like Harris and Abrams, are at the forefront of politics and social justice, said Robert Stephens, founder of the HBCU collective, an advocacy group aiming to increase support of Black higher education institutions.

HBCUs have educated generations of African American leaders and professionals, including Rev. Martin Luther King Jr and Thurgood Marshall, the civil rights lawyer who became the first African-American to hold a seat on the Supreme Court. Many students at Spelman and Morehouse were also involved in the civil rights movement.

But the impact of HBCUs goes beyond politics. For Marilyn Griffin, a high school teacher in Detroit, Michigan, attending an HBCU helped shape the person and educator she is now.

"I found a really big part of myself there, including self awareness and confidence that I didn't get growing up," said Griffin, 39, a graduate of Florida A&M University.

Griffin says her interest in African American history grew while attending college and ultimately she decided to pursue a career in education. Now, she constantly encourages all of her students to learn about their heritage and culture.

HBCUs have produced notable alumni over the years while struggling for funding and facing stigma about not being able to prepare students "for the real world."

Stephens, a Winston-Salem State University alumnus, said he disagrees with people who believe HBCUs don't have a rigorous education.

"When I think about my experience at an HBCU, it was one where I was nourished," Stephens said. "I was free to be a Black man in America and that has been probably one of the most uplifting things I've ever experienced."

HBCUs award about 20% of African American STEM bachelor's degrees, according to the United Negro College Fund. They have also fueled social and economic mobility for Black Americans.

A report released last year by the Rutgers Center for Minority Serving Institutions indicates that economic mobility is better for HBCU students than for students who attend other schools.

School administrators could be tapping Harris to help cultivate close ties to the Biden administration as HBCUs across the US have less financial security than predominantly White institutions.

Within both public and private sectors, HBCU endowments lag behind PWIs by at least 70%, according to a recent report by the American Council on Education.

Earlier this year, an outpouring of financial pledges and philanthropic gifts made their way to HBCUs following the George Floyd protests amid renewed calls for racial justice but many HBCUs continue facing financial pressure.

During their campaign, President-elect Joe Biden and Harris pledged to "rectify the funding disparities" faced by HBCUs and other minority-serving institutions by investing over $70 billion.

As Biden and Harris prepare to take office next year, Robinson, the Winston-Salem State University chancellor offered some advise.

"Continue to think about us. Continue to have conversations with us and continue to listen to what our needs are, as we move forward," Robinson told WXII.