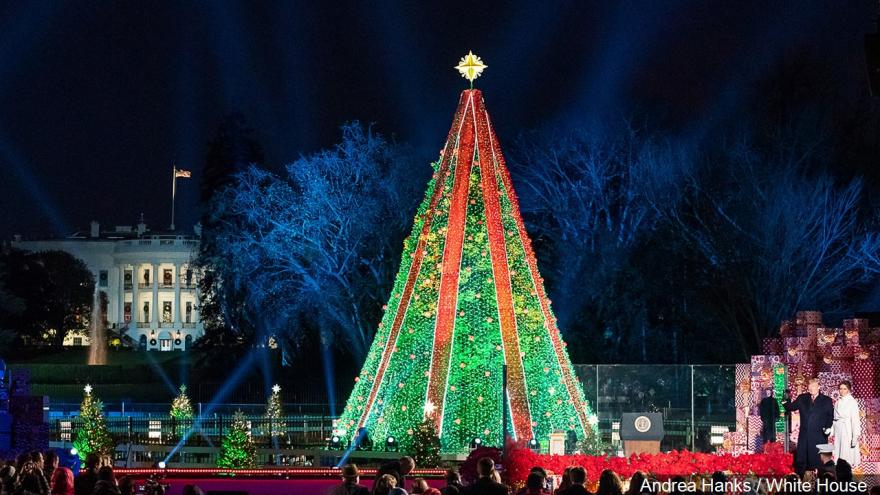 WASHINGTON (AP) — The lights were not twinkling. The toy trains were not whirring. Even the nearby bathrooms were locked.

The national Christmas tree, symbol of a country's seasonal cheer, instead stood as an icon of a government in paralysis, as the partial shutdown stretched into the holiday with an array of federal services frozen, some 800,000 public servants either idled or about to be and the disruption to the broader public bound to grow when the quiet spell ends later this week.

Already facilities at many national parks were shuttered, if the parks were accessible at all, and thousands of federal buildings were to remain closed when the work week resumed unless President Donald Trump and members of Congress quickly break through a budget impasse that the White House said could drag on into 2019.

Under cloudy skies in a brisk wind on the third day of the shutdown, the capital put on little holiday wonder for visitors like Greg Forcherio of Columbia, Maryland, a government contractor with no office to work in after the holidays as long as federal buildings stayed closed. He, his wife and their toddler on Monday came to see the giant, glittering spruce tree brought from Colorado to serve as the national Christmas tree, normally a focal point for Washington holiday visitors.

But a locked chain-link fence blocked access to the site and the nearby White House visitor's center and its bathrooms were closed, with a hand-scrawled sign directing visitors to portable toilets, which also were chained shut. "Kind of annoying when you've got young children," Forcherio said.

Access to the site was restored later Monday and finally, as night fell on Christmas Eve, the lights returned. The government had announced a day earlier that it would be sealed off because of the shutdown and because repairs had slowed after an episode of vandalism on the tree before the weekend. It reopened with money from the National Park Foundation, a charity.

A labor organization representing U.S. Treasury employees said Monday that federal workers around the country were cutting backing on spending and changing holiday plans with family because of the shutdown.

"Just in case anyone still thinks a partial shutdown over a holiday weekend is harmless, think again," Tony Reardon of the National Treasury Employees Union said in a statement. "Your friends and neighbors around the country who work for the federal government are already showing signs of financial stress."

In the mountain town of Gatlinburg, Tennessee, Taylor Futch said the shutdown has already put extra stress on her family, whose sole income comes from her husband, a wildlife biologist who works with black bears for the Great Smoky Mountains National Park. With two young daughters, the couple is facing an $800 land payment due at the beginning of January as well as a mortgage, car payment and the usual bills.

"We're trying to gather up a couple things just in case I need to start selling stuff on Facebook or eBay," she said. "If his paycheck doesn't get here on Friday, we may not have enough for the mortgage."

Federal workers at the agencies affected by the gap in appropriations go unpaid as long as the shutdown lasts. They were expected to get retroactive pay once the impasse was broken.

The shutdown affected national parks unevenly, some still accessible with bare-bones staffing levels, some operating with money from states or charitable groups and others locked off. Arizona and Utah officials implemented plans to keep open Grand Canyon, Zion, Arches, Bryce Canyon and Zion national parks and provide services such as public restrooms, shuttles and trash collection. Concession operations such as lodges remained open, and Utah's money for parks in that state included visitor centers.

Of the roughly 800,000 federal employees facing deferred pay, more than half were deemed essential, such as U.S. Secret Service agents and Transportation Security Administration airport agent. About 380,000 were to be furloughed. Legislation ensuring that workers receive back pay was expected to clear Congress.

The immediate impact was blunted by the timing of the shutdown — spanning a weekend and now Christmas Eve and Christmas, both federal holiday days. But there was little chance to solve anything before Thursday at the earliest, when the House and Senate return to work.

Trump stayed at the White House, canceling plans to spend the holidays in Florida, and kept up a torrent of tweets on Monday about his critics and his insistence on money for a border wall, the issue at the heart of the budget dispute.

Not far from those quarters, Terri Lyons, visiting from Rockville, Maryland, with her 27-year-old daughter as they do every Christmas, found the lights off at one of her favorite monuments, the Korean War Veterans Memorial, when she visited Sunday night. A single guide tried to show tourists around in the darkness.

But people were drawn to the illuminated Lincoln Memorial, she said. "It was the only one with lights."

On Monday morning, standing at the fence surrounding the tree, Lyons listened to the foreign tourists around her and said she felt embarrassed. "I feel for the people trying to visit from outside of the country, what they think of us," she said.