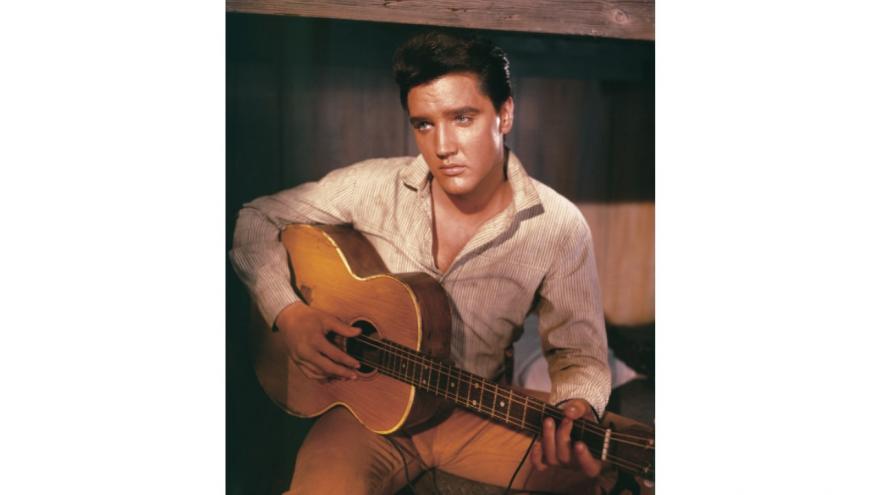 Kruse GWS Auctions is putting Elvis Presley's flaming red Hagstrom Viking II guitar on the block. The instrument was used by the Presley during his nationally televised 1968 "Comeback Special" after the star had devoted much of the previous seven years to his movie career. A portrait shows Presley holding an acoustic guitar circa 1956.

(CNN) -- Elvis Presley fans will have a chance to claim a bit of musical history when a guitar used during an iconic performance by the king of rock 'n' roll goes up for grabs later this month.

The instrument was used by Presley during his nationally televised 1968 "Comeback Special" after the star had devoted much of the previous seven years to his movie career.

The eye-catching instrument was also featured on the cover of the "From Elvis in Memphis" album in 1969.

Presley, who died in 1977, has sold more than 1 billion records worldwide.

The guitar belonged to American guitarist Al Casey, who was asked by producers to let Elvis use it during his TV special because of the guitar's flashy and fiery appeal. According to the auctioneers, it has not been offered for auction since the 1990s.

But the classic commodity comes with some heavy financial strings attached -- the starting price has been set at $250,000.

Other collectibles up for auction include a crystal-studded glove worn by Michael Jackson, Elizabeth Taylor's blue rhinestone drop earrings and a 1950 Cadillac Fleetwood featured in the movie "The Godfather" and previously owned by Mae West.

Live bidding will be held on March 27.