An invasive species has an ethnic slur in its common name. Entomologists are changing that 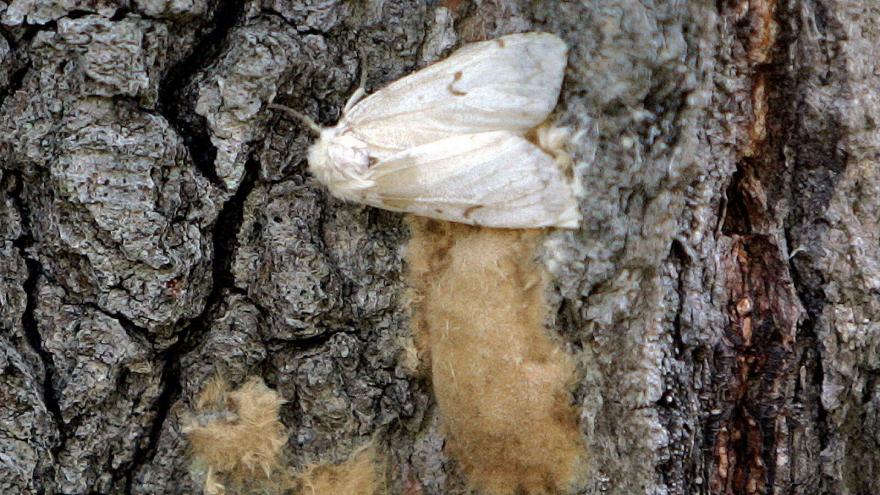 A female Lymantria dispar moth lays her eggs on the trunk of a tree in the Salmon River State Forest in Connecticut.

(CNN) -- Ethel Brooks, raised in a Romani community in New Hampshire, grew up with other kids telling her to stay away from "gypsy moths."

Brooks didn't understand the connection between her Romani community -- for which the word "gypsy" has been used as a pejorative -- and a destructive, invasive insect species that "poses a danger to North American forests."

In 2020, a complaint to the Entomological Society of America initiated efforts to stop use of the derogatory term. Last month, the society's governing board voted to remove "gypsy moth" and "gypsy ant" from a list of common names used to refer to insects.

They plan to consult a volunteer group to rename the moth and ant, which will go by their respective Latin names, Lymantria dispar and Aphaenogaster araneoides, until new common names are chosen.

The ESA is the largest entomological society in the world and publishes eight internationally acclaimed academic journals, according to its website.

"We want everybody to feel welcome in the entomological community and so, if we're using nomenclature that makes people feel excluded or marginalized or contributes to that in any way, there's no reason to continue to use it," ESA President Michelle Smith said.

Brooks, a Romani scholar and the chair of women's, gender and sexuality studies at Rutgers University, said the move is groundbreaking.

"This is a step toward us being able to push back, and say, 'Hey, there are actually 12 million or more of us in the world. We have a history. We are people. We're human," Brooks said.

Lymantria dispar first came to the United States in 1869 from Europe, and its caterpillars leave trees vulnerable to disease, according to the US Department of Agriculture. The name "gypsy moth" has been around for decades, Smith said.

Aphaenogaster araneoides, the ant, got its name from Terry McGlynn, a professor at California State University Dominguez Hills, in 2000. McGlynn told CNN he regrets the name. He wrote about it in a 2019 blog post, saying he came up with it in "ignorance of the negativity of the term."

The Romani community faces discrimination worldwide. According to a 2020 study by the FXB Center for Health and Human Rights at Harvard University, which explored Romani experiences with discrimination and prejudice in the United States, a majority of the 363 Romani Americans who were interviewed said American media and television portray a negative image of Romani people.

Margareta Matache, director of the Roma Program at the FXB Center for Health and Human Rights, was consulted as a part of the name removal. She said the change, although it seems small, is relevant in the conversation about the rights of Romani people.

"Words have power, and more so, racial slurs like the G-word have been particularly offensive and dangerous for Romani people," Matache said. "We have been constantly dehumanized through the means of language, and links to insects, animals, criminality, opulence."

"Changing the name of this insect is very relevant in rectifying the mainstream narratives about Romani people. Our people, history, and culture have been too often misrepresented and mocked, and prejudice has always been used to justify anti-Roma racism and discrimination against Romani people across the world."