An Ohio officer wrote a teen a ticket for driving 100 mph, then penned an emotional warning 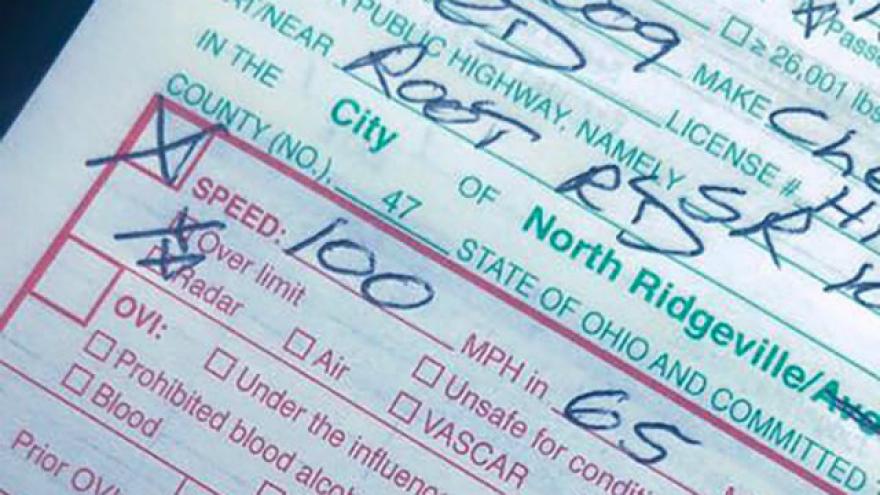 An Ohio police officer wrote that he\'s proud to have written this ticket to an 18-year-old. Photo courtesy North Ridgeville PD

(CNN) -- A police officer believes he may have prevented "an unspeakable Christmas tragedy" when he pulled over an 18-year-old for allegedly driving 100 miles per hour in Ohio.

In a letter to the "kid I stopped" that was posted to the North Ridgeville Police Department's Facebook page, the unnamed officer said the teen was "minutes away" from a terrible wreck.

"If not only killing yourself, you were well on your way to killing some innocent person who was minding their own business doing nothing else wrong but being in front of you," he wrote.

The officer wrote that while the teen probably felt invincible, that's simply not true.

"I can tell you dozens of stories of dead and broken 18 year old bodies that I've pulled from cars. Broken bodies that I've found in front yards after crashes. Unrecognizable bodies," he wrote. "They thought they were invincible too. They weren't."

The stop happened Saturday, after the officer clocked the teen's red, 2009 Chevy Cobalt on radar going 100 mph, a copy of the ticket obtained by CNN shows. The notes say the driver was cooperative and pulled over before the officer caught up with him.

"You said you didn't realize how fast you were going. That's a lie," the officer wrote in the Facebook post. "You may not realize when you're doing 45 in a 35 but you are fully aware of every mile per hour at 100. You realize it with every bump you hit. You realize it as you pass cars so fast the wind moves your car. You realize it every time you drift over the line and when you move the wheel the car reacts a lot quicker than you're used to."

The driver obviously was scared when he was stopped, "visibly shaking and breathing hard," the officer wrote, but he was afraid for the wrong reasons.

"You should have been scared that you were trying to kill yourself," he wrote.

The officer urged the driver to think of his relatives. When "they say 'Be careful. Drive safe' ... That is the very last act of them pleading with you to come home safe," he wrote.

The driver seemed like a nice kid who made a bad decision, the officer wrote, adding he didn't regret writing the ticket.

"In fact, I'm proud of it," he wrote. "I hope you're paying it off for months and with every payment you think about how it wasn't worth it. I hope you slow down. I hope that when your mom tells you to 'drive safe' you make a promise to her, and yourself, that you will. I hope you can envision me sitting in your kitchen telling your screaming mother that you have been killed."

The ticket orders the teen to appear in the North Ridgeville Mayor's Court on December 26, meaning it may become an expensive Christmas present -- for its recipient.

Added the officer in his letter: "You're welcome."