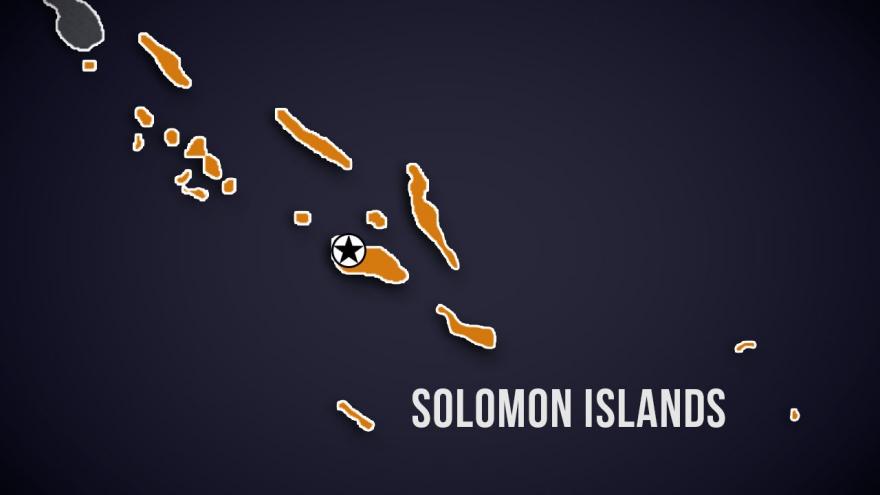 (CNN) -- An environmental crisis is unfolding in the Solomon Islands, where a ship is leaking oil near a UNESCO World Heritage Site and threatens to spill hundreds of metric tons more, authorities say.

The ship was carrying more than 700 metric tons when it ran aground in the Solomon Islands on February 5, the Australian Department of Foreign Affairs and Trade, known as DFAT, said Tuesday.

Since then, the clear waters have been tainted by fuel oil leaking from the ship, known as the Solomon Trader. CNN affiliate Radio NZ reported this week about 100 metric tons of fuel have spilled so far.

But the worst could be to come. Australian officials said there is a "high risk" the remaining heavy fuel oil on the ship -- about 600 metric tons -- could contaminate the area even further.

The Solomon Trader ran aground in Kangava Bay at Rennell Island, the DFAT said, the southern third of which has been a designated UNESCO World Heritage Site since 1998.

The site is the largest raised coral atoll in the world, according to UNESCO, which said in a statement this week the leak is taking place "just outside" the World Heritage site. However, "there is concern for a possible impact on the World Heritage site and the livelihoods of the local communities," UNESCO said.

The Australian Maritime Safety Authority has conducted aerial assessments, the Australian DFAT said, which "confirmed extensive oil leakage around the ship, which has begun to disperse across the surrounding sea and shoreline."

The oil had spread about 5 to 6 kilometers and has begun to wash up onshore, the DFAT said.

And the environmental impacts of the leak have already begun, according to Radio NZ.

Loti Yates, the director of the Solomon Islands Disaster Management Office, told the outlet that dead fish have been washing up on beaches.

"There are dead fish and crabs and all that," Yates said. "The fumes that is coming out from the oil is also affecting communities and I just had a report it's also impacting on the chicken and birds."

Australian officials are supporting the Solomon Islands in efforts to mitigate ecological damage. The DFAT said the Australian government has deployed special equipment and an eight-person response crew from the Australian Maritime Safety Authority.

The government of the Solomon Islands says the "responsibility to salvage the vessel and mitigate the environmental impact of this incident rests with the commercial entities involved," including the ship's owner, King Trader Ltd., and its insurer, Korea Protection and Indemnity Club.

In a Wednesday statement, the insurer and owner "offered a sincere apology to the people of the Solomon Islands" and said "both parties are acutely aware of the environmental damage and impacts to the local community."

The ship had been chartered by a bauxite mining company, the statement said, when it was grounded last month.

King Trader attempted to tug the ship away, but those efforts were thwarted by a recent cyclone, which the insurer said "pushed the stricken vessel harder into the reef, resulting in hull and engine room damage."

Since then, a number of factors have delayed the salvage response, the statement added, including the vessel losing power and inclement weather.

The companies are now working on transferring the remaining 600 metric tons of fuel oil on the ship to different tanks, they said, which will be pumped onto a separate barge that is en route.

They've also started deploying oil spill booms to contain the spread, and have begun cleaning along the shoreline, the statement said.