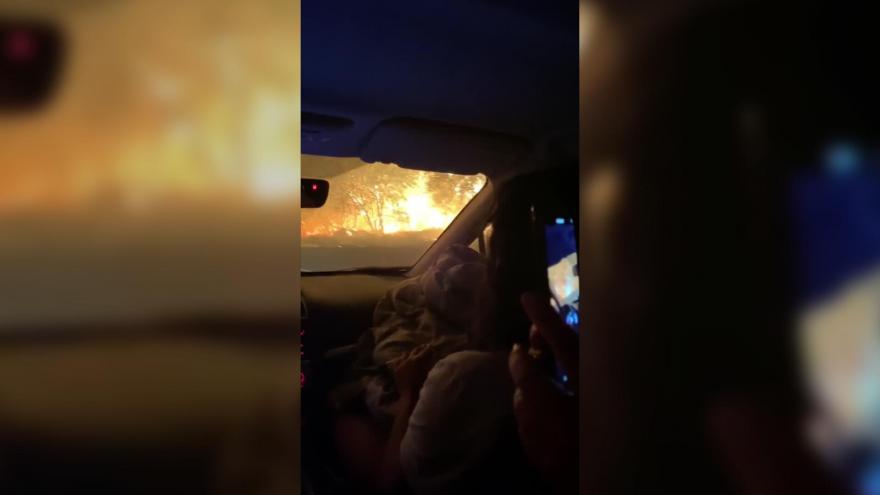 Flames were seen on both sides of the road as they fled they area.

Allison Hargett, her husband Tyler, and their 6-year-old daughter Lilly were camping at Detroit Lake State Park with their friends, Tim and Adamma Dye. The lake is southeast of Salem and is a popular destination for boating, water sports and fishing, according to the park's website.

The Hargett family from Gladstone, outside of Portland, arrived to the campgrounds on Monday with their boat. A trip that was supposed to be relaxing quickly took a turn for the worst as they received evacuation orders around 1 a.m. on Tuesday.

Allison Hargett told CNN her family loaded in their vehicle with the boat to tow and fled the area as the wildfire loomed. Their friends also evacuated in their own vehicle ahead of them, she said.

The Beachie Creek fire, which started on August 16, has spread to more than 500 acres of land, according to the US Forest Service. The cause of the fire is unknown, the federal agency says. High winds and extremely dry conditions fueled the fire, sparking evacuations of several cities in Marion County, where Detroit Lake State Park is located.

As the Hargetts were fleeing, an orange glow could be seen peeking through the tall trees and red embers floated around them like snowflakes. As they entered Mill City, which is also under evacuation orders, their vehicle ran out of gas.

"(Our friends) were in front of us and saw that we pulled over and turned around, tossed their stuff in the back seat and told us to get in and let's go," Allison told CNN on Tuesday.

The family had to ditch their vehicle and boat in a store parking lot to assure their safety so they could continue to evacuate.

"We completely ran out of gas and would've been stranded," she said. "They saved us."

As they were driving through the area, Allison recorded videos of the flames seen illuminating the road. At one point, her daughter asked if they were going to be OK, as Adamma Dye calmly assured her they would be.

The family and their friends safely made it back home, Allison told CNN. They are unsure if their vehicle and boat are still there in one piece or if the fire consumed them.

"We are also devastated to lose our vehicle and boat ... but we are OK at least."

Marion County Sheriff's Office released video from Mill City showing multiple structures on fire. In neighboring Clackamas County, officials declared a state of emergency on Tuesday as a response to "several wildfires" in the county. The county says they have four active wildfires that have prompted evacuations -- the Beachie Creek Fire and fires in the areas of Colton and Molalla.