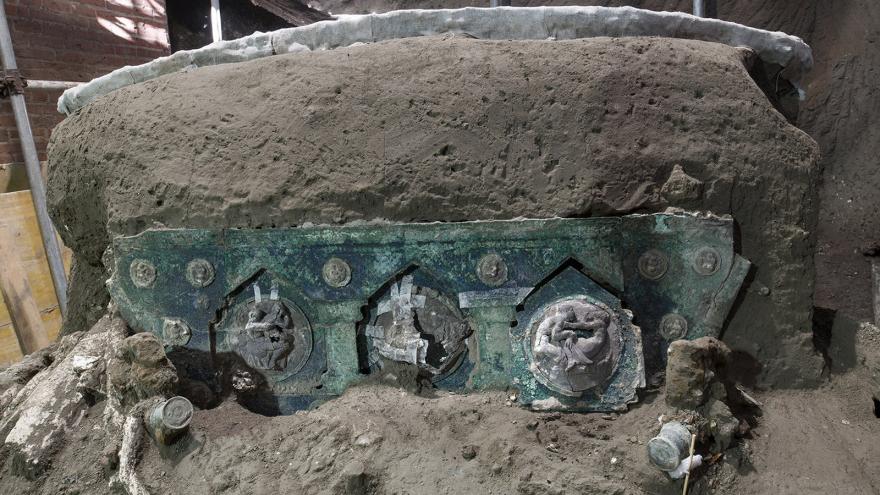 A chariot covered in volcanic material that excavators discovered near Pompeii. Authorities have been protecting the find to fend off looters since January. - Ceremonial Chariot Pompeii

(CNN) -- Excavators have discovered a large four-wheel ceremonial chariot at a villa near Pompeii, an ancient city in southern Italy.

Excavators found the bronze and tin chariot almost fully intact, with wooden remains and the imprint of ropes, according to an announcement on Saturday from the Archaeological Park of Pompeii.

"It is an extraordinary discovery for the advancement of our knowledge of the ancient world," said the outgoing director of the park, Massimo Osanna. "At Pompeii vehicles used for transport have been found in the past, such as that of the House of Menander, or the two chariots discovered at Villa Arianna, but nothing like the Civita Giuliana chariot."

The villa, north of Pompeii in Civita Giuliana, had a stable where the remains of three horses were found in 2018, including one which was harnessed. The chariot was found inside a double-level porch which probably faced onto a courtyard, not far from the stable.

The Archaeological Park of Pompeii described the find as "extraordinary" and that "it adds an extra element to the history of the house."

The carriage is decorated with sheets of bronze and red and black wooden panels. At the back, there are various stories engraved onto bronze and tin medallions. The ceiling of the villa is deciduous English oak, a material frequently used in the Roman age, and it was removed carefully to allow for further investigation.

Excavators first discovered part of the artifact emerge from the volcanic material on January 7. Weeks later, the entire chariot was revealed, miraculously intact despite the collapse of parts of the room that housed it.

The Archaeological Park of Pompeii moved the artifact to its laboratory to remove the remaining volcanic material. The park will then begin a lengthy restoration and reconstruction process.

"Pompeii continues to amaze with all of its discoveries, and it will continue to do so for many years to come, with twenty hectares still to be excavated," said Italy's culture minister, Dario Franceschini, in a press video Friday at Pompeii. "But above all, it demonstrates that valorization can occur, and tourists can be attracted from all over the world, whilst at the same time research, education and studies are being conducted..."

The park believes the chariot had a ceremonial use, like accompanying festivities, parades, and processions. This type of chariot has never been found in Italy before, instead resembling finds from Thrace, in northern Greece, said the park officials.

The ancient city of Pompeii is one of Italy's top tourist attractions, and a UNESCO World Heritage site.

Much of the Greco-Roman city is still covered in debris from when Mount Vesuvius erupted and blanketed the city in ash and pumice almost 2,000 years ago. And experts are still uncovering tidbits that give clues to what life was life when the city was functioning.

Looters have stolen from the villa several times in recent years. The Public Prosecutor's Office of Torre Annunziata, officers of the Naples Carabinieri Headquarters for the Protection of Cultural Heritage, and investigators of the Carabinieri Group Command of Torre Annunziata have been helping protect the chariot since January.

The current excavation aims to protect one of the most significant villas in the region from looters who have developed a complex system of over 80 tunnels at a depth of over 5 meters, looting and partially destroying some areas of the site.

"The fight against the looting of archaeological sites, both inside and outside the urban area of ancient Pompeii, is certainly one of the primary objectives of the Office," said Chief Prosecutor of Torre Annunziata Nunzio Fragliasso, in a press video Friday at Pompeii.