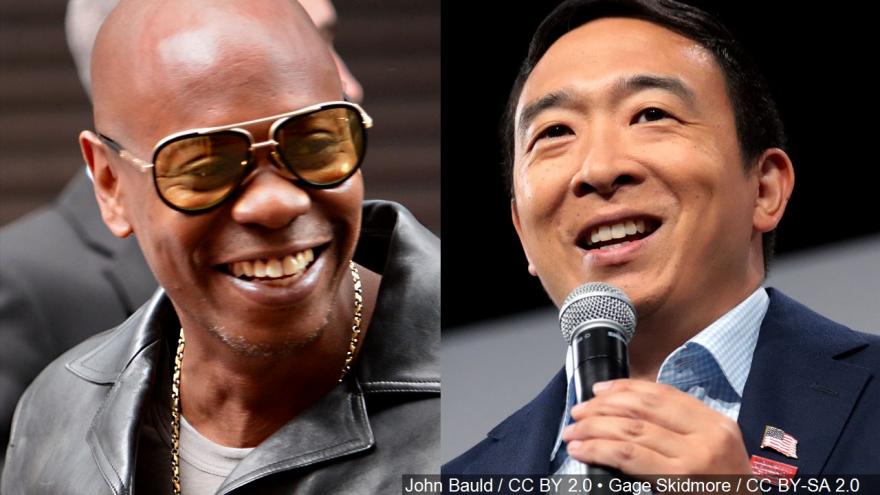 (CNN) -- Comedian Dave Chappelle announced his endorsement of presidential candidate Andrew Yang, becoming the latest celebrity to throw his support behind the New York entrepreneur running for the Democratic nomination.

"I'm Yang Gang!" said Chappelle in a release sent out by the Yang campaign Tuesday afternoon, just hours ahead of the seventh Democratic presidential debate in Des Moines. The debate is the first that Yang has not qualified for.

Yang expressed excitement for Chappelle's endorsement and explained that they share similar views.

"Dave is one of the most important voices in our country today and I'm thrilled he has thrown his support behind this campaign," Yang said in a statement. "He and I share similar concerns about the future and hopes for what it could be. We are also parents who see the world that we are leaving to our kids and believe they deserve better."

Yang also tweeted out a picture of himself and Chappelle and thanked the comedian for his support.

"Thank you @DaveChappelle and welcome to the #yanggang. You are the best. Let's do this for our kids," Yang tweeted.

The campaign also announced that Chappelle will perform two shows in the early primary state of South Carolina later this month, which will benefit the campaign. The shows will be in Columbia on January 29 and North Charleston on January 30.

Chappelle joins actor Ken Jeong and actor/singer/rapper Donald Glover, also known as Childish Gambino, as the latest celebrity to express support for Yang. Yang and Glover launched a merchandise collaboration at a one-time-only pop-up store in Los Angeles last month. Glover has also taken on a creative consultant role on the campaign.

CORRECTION: This story has been updated to correctly state the dates of Chappelle's shows.