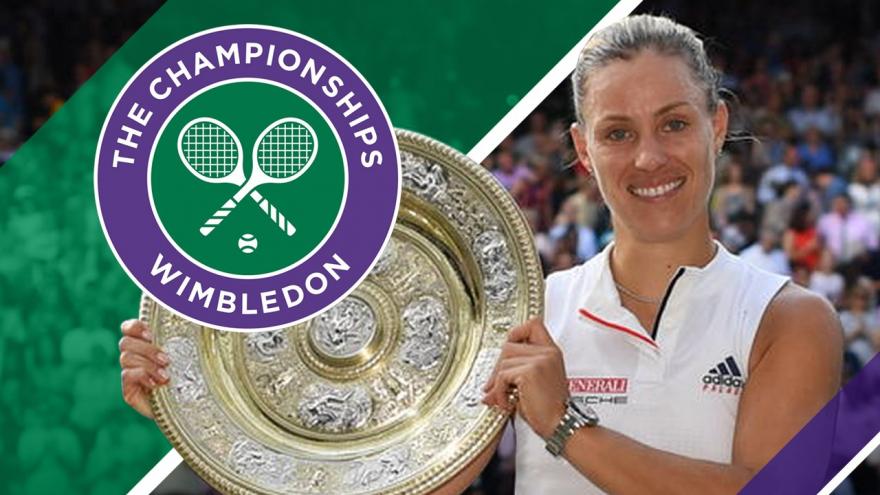 LONDON (AP) — Angelique Kerber was so steady, so patient, so accurate throughout the Wimbledon final. She never really gave Serena Williams much of a chance.

Kerber won her first championship at the All England Club and third major overall by playing cleanly as can be and picking her spots for big shots, beating Williams 6-3, 6-3 on Saturday.

"I knew that I had to play my best tennis against a champion like Serena," said Kerber, the first German woman to win Wimbledon since Steffi Graff in 1996.

She prevented Williams from claiming an eighth title at Wimbledon and 24th from all Grand Slam tournaments, which would have equaled Margaret Court's record.

Williams gave birth only 10½ months ago, then was treated for blood clots. She wore special compression leggings as a precaution during Wimbledon, just the fourth tournament of her comeback.

After all the time away, Williams spoke about being impressed with herself for just reaching the final. She also wanted to win, of course.

"To all the moms out there, I was playing for you today — and I tried," said the 36-year-old American, her voice shaking during the trophy ceremony.

"Angelique played really well," Williams said. "She played out of her mind."

Kerber made only five unforced errors the entire match, 19 fewer than Williams. Perhaps more impressive was this: She broke Williams in 4 of 9 service games.

The 30-year-old German lost to Williams in the 2016 Wimbledon final. She beat Williams in the Australian Open final that year, then won that year's U.S. Open to briefly replace her at No. 1 in the rankings.

Kerber addressed Williams during the on-court interviews, saying: "You're such an inspiration for everybody, for all of us. I'm sure you will have your next Grand Slam title soon. I'm really, really sure."

The final started more than two hours late, because they had to wait for the end of Novak Djokovic's five-set victory over Rafael Nadal in a men's semifinal that was suspended the night before.

Williams' play was tight right from the outset.

After taking the opening two points, she made four miscues in a row to get broken. That was part of a run in which she dropped 8 of 9 points. The American was mostly her own undoing, too: She was responsible for the final's initial six unforced errors. By the time the first set was over, the disparity was 14-3.

That's not going to work against an opponent of Kerber's quality.

Trying to sneak a ball by Kerber is something akin to trying to put one past a brick wall. There are no holes.

The left-hander scurried along the baseline, this way and that, using a combination of quickness and anticipation to track down what often appeared to be winners for Williams but were not enough to end a point. Kerber would bend real low, even putting a knee right on the grass to get a ball back.

And when she swung her racket, the measure was almost always true.

That's not to say Kerber is only about defending. She has added a more aggressive element to her game in recent years. That was on display Saturday when she delivered a pair of down-the-line forehand passing winners to collect the last break she'd need, for a 4-2 edge in the second set.

Soon enough, she was down on the grass, celebrating the moment and caking dirt on her white dress.

"It was such an amazing tournament for me. I was really happy to get this far," Williams said. "It's obviously disappointing, but I can't be disappointed. I have so much to look forward to. I'm literally just getting started."