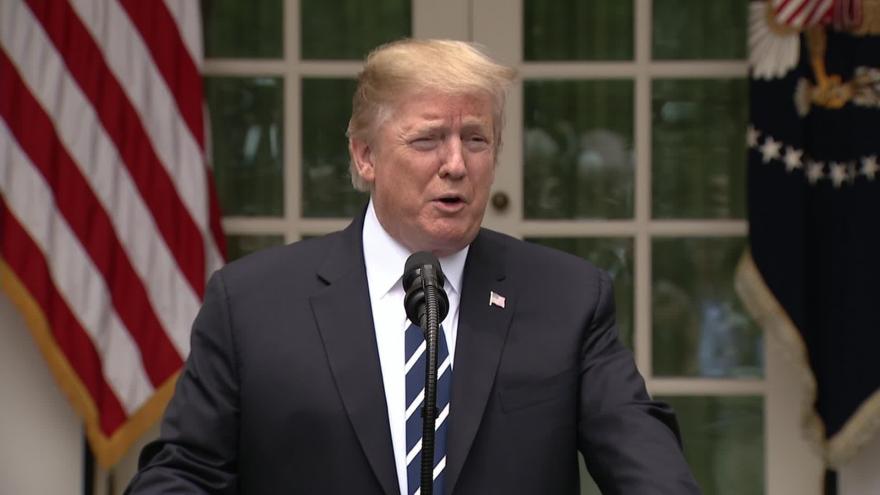 The Rose Garden speech came after an abbreviated meeting with House Speaker Nancy Pelosi and Senate Minority Leader Chuck Schumer who were there to discuss a bipartisan infrastructure spending package.

(CNN) -- President Donald Trump took his deepening rage with Democrats to the White House Rose Garden on Wednesday, orchestrating a public display of fury at persistent oversight requests he now says are thwarting any bipartisan cooperation.

The episode, meant to shame his political rivals, also placed into clear relief how Democrats' recent subpoenas and information requests have rattled the President.

And it raised the stakes on House Speaker Nancy Pelosi, who is facing louder calls from members of her party to begin impeachment proceedings.

Speaking minutes after abruptly cutting short a meeting at the White House with Pelosi and her Senate counterpart Sen. Chuck Schumer, Trump announced he wouldn't attempt any further bipartisanship until the congressional investigations conclude.

Democrats, he said, had chosen the former -- and he could not work with them until that concludes.

"We're going to go down one track at a time," he said. "Get these phony investigations over with."

Officials said the Rose Garden outburst was prompted by an assertion earlier in the day from Pelosi, who accused Trump of engaging in a "cover up" after emerging from a meeting with Democrats to discuss impeaching the President. Pelosi has resisted calls from Democrats to take that step, but Trump's resistance to oversight requests has caused the impeachment calls to grow louder.

Upon learning of Pelosi's comment from cable news, Trump erupted in anger, according to people familiar with the matter, and instructed aides to begin preparing the Rose Garden for his event. That included printing out a poster declaring "no collusion" that was affixed to his podium, underneath the presidential seal.

And though Trump had determined he could not proceed with the planned meeting on infrastructure, he did not disinvite Pelosi or Schumer because he wanted to relay his dissatisfaction in person, according to an aide.

The abbreviated meeting with Pelosi and Schumer was intended to discuss a bipartisan infrastructure spending package. But Trump said during the meeting he couldn't work with them until their investigations are over.

"Instead of walking in happily into a meeting, I walk into, look at people that have just said that I was doing a cover-up," Trump said. "I don't do cover-ups."

In the minutes-long meeting in the Cabinet Room, Trump didn't shake any of the lawmakers' hands or sit in his seat, a person familiar with the session said. He left the room before anyone else could speak.

It carried echoes of a similar walk-out during this year's government shutdown, when the President invited Democratic congressional leaders to the White House only to abruptly depart the meeting after they informed him they still did not support funding for a border wall.

Even before Wednesday, Trump's infrastructure proposals had faced an uncertain future. Some White House officials -- namely the acting chief of staff Mick Mulvaney -- had cast doubts on how the plan would be financed.

Still, Trump had been intent on working toward some agreement, officials said, but found Pelosi's comment on a cover-up so galling he determined he wouldn't be able to move forward.

"Bottom line: If Nancy Pelosi had not come out this morning and said what she said about 'cover-up,' they would still be in there right now meeting on infrastructure," one senior White House official argued.

Speaking on Capitol Hill later, Pelosi said she and other Democrats went into the meeting with a "spirit of bipartisanship" but that the President "just took a pass" on continuing their discussions on infrastructure.

Both she and Schumer cast doubts on the President's true willingness to work on a plan that would repair the nation's crumbling roads, bridges and airports.

"Maybe it was lack of confidence on his part that he really couldn't come, match the greatness of the challenge that we have," she said.

Pelosi has come under pressure from members of her caucus to allow impeachment proceedings to move forward, calls that have grown louder as the administration stonewalls congressional requests for information and interviews from current and former administration officials.

The latest subpoenas went to Hope Hicks, the President's former communications guru and one of his closest confidantes, and Annie Donaldson, a former deputy White House counsel who kept assiduous notes during her time in the Trump administration.

Pelosi told the Democratic caucus in a private meeting on Wednesday morning to continue fighting the administration in the courts and through investigations on Capitol Hill -- but signaled she was still wary of going as far as attempting to impeach the President.

Later, she adopted a somewhat pitying tone during an appearance before reporters.

"In any event, I pray for the President of the United States," she said.