Animals are better at predicting World Cup matches than you 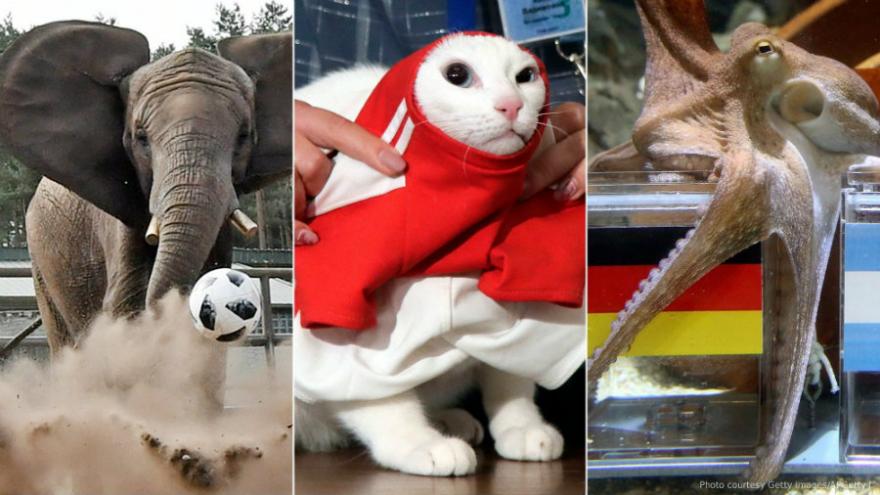 (CNN) -- Everything is falling into place.

And, most importantly, the animals are coming out to play.

Since Paul the Octopus won the hearts of soccer fans around the globe eight years ago, fortune-telling animals have been tasked with predicting World Cup winners. This year's furry favorite is Achilles the deaf cat. Let's see how he fares against past prognosticators.

Can an animal be an octopus and a GOAT at the same time? When it comes to animal prognosticators, Paul is truly the greatest of all time. In 2010, the cephalopod made eight correct predictions during the World Cup and nailed the finals with a prophetic victory pick for Spain.

Paul, beloved by the world, was not without his enemies. When he correctly predicted that Germany would boot Argentina, Argentinian chef Nicholas Bederrou posted an octopus recipe on Facebook. Fans of opposing countries made sushi-related death threats.

Following the 2010 World Cup, Paul retired to a quiet aquatic life. At the time, Mark Oakley, spokesman for Germany's Oberhausen Sea Life Center, where Paul lived, told CNN, "He has been a superstar and deserves a quiet retirement. Paul the octopus is arguably the most famous sea creature there has ever been."

A few short months later, Paul passed away in his tank, devastating fans worldwide. Our thoughts and prayers remain with Paul's aquarial family, as every four years the painful wound is reopened.

She made predictions about the 2006 Women's World Cup, the 2010 World Cup and Euro 2008. Her method: kicking soccer balls into nets marked by country flags.

She correctly shot the ball 30 out of 33 times.

Overall success rate: We never got to find out

In a half-hearted attempt to claim divination glory, China entered the fortune-telling animal game in 2014. The nation's state media announced it would have a group of panda cubs at its Giant Panda Protection and Research Centre predict winners by climbing trees to choose flags.

But before the cubs could earn fame, Chinese authorities called the project off. They decided not to subject the cubs to incessant camera coverage and over-eager fans. (Maybe Paul's death threats played a role?)

The oracle life is just not for every animal. These precious pandas simply couldn't handle the limelight.

Overall success rate: "My prediction skills are hopping all over the place."

Predictaroo, originally known as Flopsy, is the Jaden Smith of the fortune-telling world: Critics question her talent, but she's got a sizable social media following and a career based off the success of an accomplished father.

Her owner is conservationist Bindi Irwin, daughter of "The Crocodile Hunter" Steve Irwin. Bindi combined her star power with the support of the Australian Zoo to launch Flopsy onto the world stage.

After renaming her Predictaroo, Bindi created a series of videos announcing her match predictions.

Predictaroo has over 16,000 Twitter followers, and videos featuring the marsupial have more than 100,000 views.

By choosing between two food bowls, she predicts not just World Cup soccer games but also rugby and even crocodile tracking.

Discovered by the newspaper Gulf News, Shaheen enjoyed a respectable streak in 2014, when he picked 19 out of 29 World Cup matches correctly.

The clairvoyant camel made his picks by chewing on signs portraying each country's flag. Though his success rate isn't spectacular, Shaheen's accuracy increased as the competition went on. Perhaps the pressure of the game inspired this camel. Don't all dromedaries live for drama?

Achilles appears to be 2018's World Cup animal oracle. He presides at the Hermitage Museum in St. Petersburg, Russia, and chooses between bowls of cat food marked with countries.

Although he is deaf, museum officials feel his hearing loss is an advantage that allows him intense concentration in making his picks. If the strategy doesn't work out, he can always fall back on his day job -- catching rats in the museum basement.

Unsurprisingly, Achilles picked Russia to win in its first-round match over Saudi Arabia. At the moment, he's one for one, and fans all over the world are awaiting his predictions with anticipation.