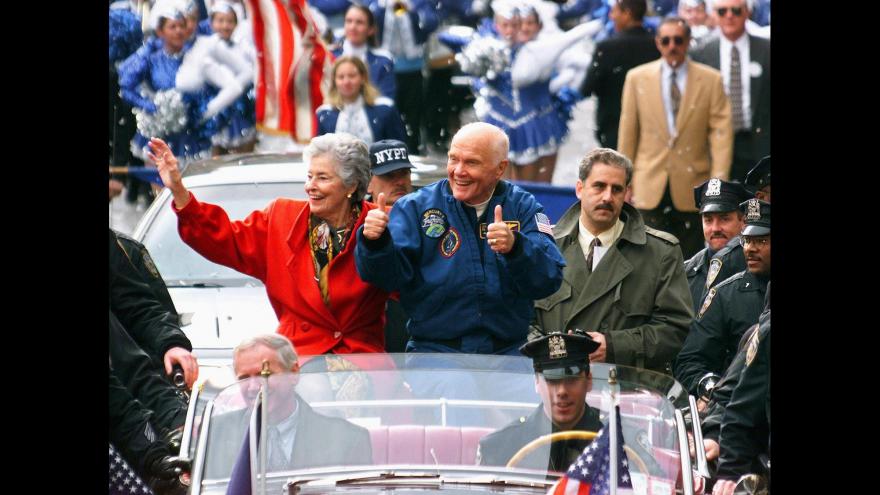 Annie Glenn, seen here at a ticker-tape parade with her late husband John Glenn, died of coronavirus complications. She was 100.

(CNN) -- Annie Glenn, a lifelong advocate for those with speech impediments and wife of the late astronaut John Glenn, died of complications from Covid-19. She was 100.

Glenn was living at a senior center in St. Paul, Minnesota, when she died, the Ohio State University's John Glenn College of Public Affairs told CNN. Her children notified the university of her passing.

Though she's perhaps best known for her proximation to her husband, Annie Glenn was an American hero in her own right, veteran reporter Bob Greene wrote in a 2012 CNN Opinion piece.

"Glenn has had a hero of his own," Green wrote, "Someone who he has seen display endless courage of a different kind: Annie Glenn."

Annie knew her husband since birth

Annie and John Glenn were married for 68 year before John's death in 2016.

The two grew up together in New Concord, Ohio, and played as children.

Throughout her childhood, Annie Castor, as she was known then, had a stutter so severe that she couldn't manage to speak 85% of the time, Greene wrote.

Glenn loved her all the same. The two were married in 1943 shortly before John served in World War II as a Marine aviator, and while he was at war, she played the organ at church.

At least while she played, she wouldn't have to talk.

She overcame a debilitating stutter

Glenn's stutter made adulthood difficult, too. She'd point to items on restaurant menus and feared she wouldn't get a word out over the phone if she needed to call the doctor.

"I can remember some very painful experiences -- especially the ridicule," she said in a 1980 People profile. "People would tell me to hurry up or start shouting at me because they thought I was deaf and dumb."

All the while, she stuck by her husband through his service in two wars, a Senate stint and two trips to space. The two were quite close, though Annie was still reluctant to speak in public.

But in 1973, after meeting with a Virginian doctor who helped her through intensive speech therapy, she got a grip on her debilitating stutter.

She was 53 when she could speak with confidence. She wanted other women with stutters to feel the way she finally felt.

So she prepared a speech to give in her native Ohio to a crowd of 300. She'd never been able to speak long sentences before, so she practiced for three months before she delivered it, she told People.

"A new world has opened up for me," she said. "The most important part of what's happened is that now I can get my ideas across," she said. "I used to be just a good listener; now I'm a chatterbox."

For her work, she received an award from the American Speech and Hearing Association in 1983 for "providing an inspiring model for people with communicative disorders." A few years later, the National Association for Hearing and Speech Action named an award after her, according to Ohio State University's Ohio Congressional Archives.

A member of the Ohio Women's Hall of Fame, Glenn left a significant mark on the state, said Ohio Gov. Mike DeWine on Monday after the news of her death broke.

"This is a very sad day for all Ohioans," DeWine said in a statement. "Annie Glenn was certainly our most beloved Ohioan. She represented all that is good about our country."

Ohio Sen. Sherrod Brown remembered Glenn in a statement as an "advocate, a philanthropist, a mother and partner and as a friend."

"Annie will be remembered for her work to lift others up, including those who shared her struggles with communicative disorders," Brown said.