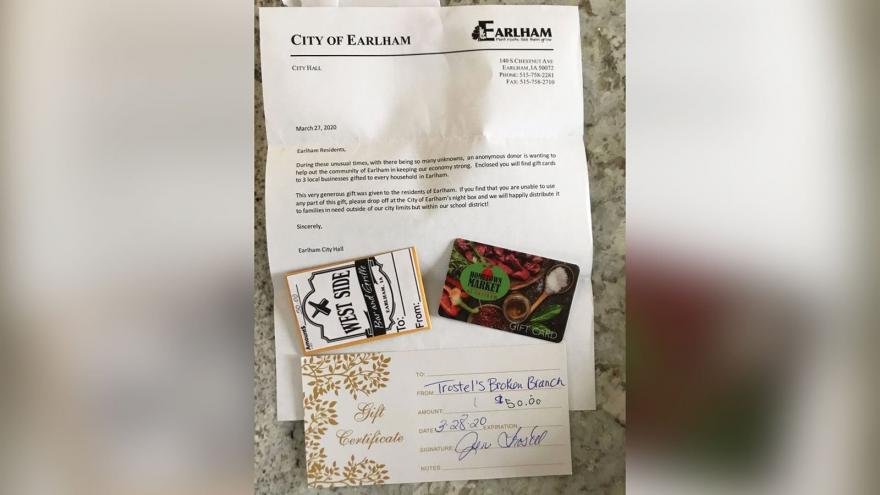 (CNN) -- Like most of the world, the residents of a small town in Iowa are stuck at home, feeling isolated, alone, and trying their best to stay positive during the coronavirus pandemic.

So when an anonymous donor gave everyone in the town of Earlham $150 worth of gift cards for food, the community received something more valuable than money: hope.

It started on March 26, when Earlham Mayor Jeff Lillie received a call from a friend who told him there was a donor interested in interjecting money into the town's economy. Earlham, population 1,450, is 30 miles west of Des Moines,

At first, the donor, who did not reveal their identity to the mayor, said they would buy 100 gift cards from three local businesses. An hour later, his friend called Lillie again and said the donor was bumping the number up to 250. An hour after that, the number was raised to 500.

"I said to him, at 500, you're darn near giving a gift card to every single household in Earlham," Lillie said. "When I told him there were 549 households in town, he said 'Done.' And that was it. I was ecstatic because it made sure everyone would get a card."

But what Lillie didn't know was that the donor wasn't going to buy 549 cards in all -- they were buying 549 gift cards from each of the three businesses. In total, they donated $82,350, meaning each business received more than $27,000.

Exactly one week later, every person in town woke up to a surprise in their mailbox: An envelope containing a letter from the city and three $50 gift cards to West Side Bar and Grille, Hometown Market, a grocery store, and Trostel's Broken Branch, a restaurant and coffee shop.

The donation "completely overwhelmed" Lillie, who knew people around town who had been laid off and struggling due to the pandemic. The cards, he said, gave them a reason to smile and "a way to tell them help is on the way."

"It came at the end of a couple really hard weeks," Lillie told CNN, holding back tears.

"I remember going home and walking through the front door, and I couldn't speak for a minute. I was just crying like a baby, and my little boy saw me and wrapped around my leg and said, 'Daddy what's wrong?' And eventually I was able to choke it out: 'Buddy, right now, for once, nothing's wrong.'"

One of the restaurants involved in the gift cards, Trostel's Broken Branch, was extremely new. So new that the eatery was set to officially open its doors just days before Gov. Kim Reynolds ordered all nonessential businesses in the state to shut down on March 17.

"We were in the middle of interviews for our employees, hiring some waitstaff and trying to get everything ready," restaurant owner Jennifer Trostel told CNN. "Just about then, everything closed down. It hit right when we were going to open our restaurant."

While other restaurants were equipped to transition to takeout only, Trostel, who owns the restaurant with her husband Troy, said they were completely "unprepared" to make that move. Without any staff or a running computer system to take in orders or payments, the Trostels were stuck at a dead end.

That was until the anonymous donor saved their business. When she got the phone call telling her about the donation, Trostel said she was so shocked her body was covered in goosebumps.

"It gave us hope," she said. "To be able to pay our bills and know that it's OK, we don't have to close our doors forever. We'll be here when this is over. I don't think we could be able to say that without the donation."

Any Earlham resident who doesn't need the gift cards or won't use them can drop them off at a bill pay slot at City Hall. The cards will be distributed to families in the Earlham Community School District who need assistance.

When asked what he would tell the anonymous donor if he could ever meet them, Lillie said he "couldn't even find the words."

"I would tell them thank you 549 times," Lillie said. "It would be like meeting a hero."

Today 42° Mix of sun and clouds