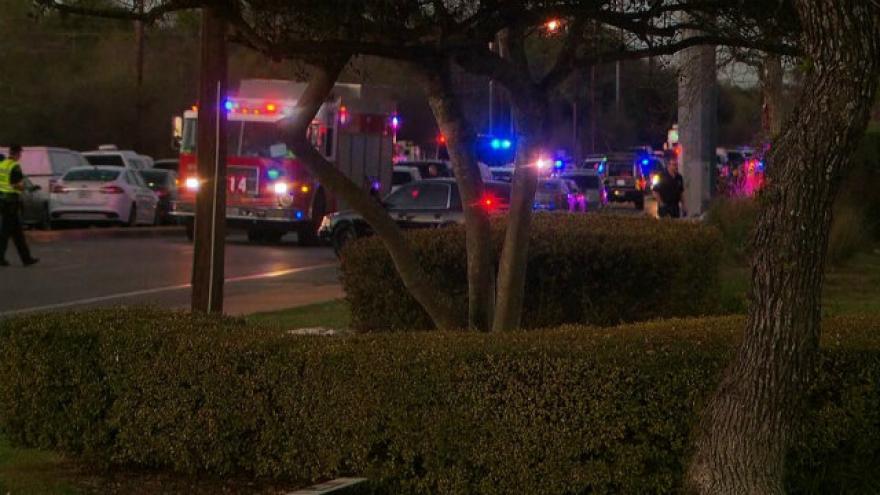 One person was injured at a site where an incendiary device was located Tuesday night in Austin, Texas, but the Bureau of Alcohol, Tobacco, Firearms and Explosives said no package bomb was involved and the agency doesn\'t think the incident is related to the string of package bombs that has hit Austin four times and San Antonio once. Photo courtesy CNN

A Goodwill employee in Austin, Texas, found two artillery simulators in a box of dropped-off items, and was injured when one of the ordinances "initiated," Assistant Chief of Austin Police Ely Reyes told reporters.
Earlier, authorities said they were responding to a report of a possible explosion, setting off fears a serial bomber had struck again in the Texas capital.

One person was injured at a site where an incendiary device was found Tuesday night in Austin, Texas, but the Bureau of Alcohol, Tobacco, Firearms and Explosives said no package bomb was involved and the agency doesn't think the incident is related to the string of package bombs that has hit Austin four times and San Antonio once.

Earlier, authorities said they were responding to a report of a possible explosion, setting off fears a serial bomber had struck again.

Austin-Travis County EMS said a man in his 30s suffered non-life-threatening injuries and was taken to a hospital. The man was treated and released, a spokesperson for St. David's South Austin Medical Center said.

Roberto Villalpando, a mobile/breaking news editor with the Austin American-Statesman newspaper, told CNN he heard what sounded like an explosion around 7 p.m.

"It was a singular boom," he said, adding that it was "pretty loud," but he didn't feel anything.

The news of the incident came on a day two packages, one in a different part of Texas, caused authorities to widen their investigation.

Two packages, one that exploded at a FedEx sorting center near San Antonio and another later discovered at a location more than an hour away, are connected to four bombings in Austin, Texas, law enforcement agencies said Tuesday evening.

The Bureau of Alcohol, Tobacco, Firearms and Explosives tweeted Tuesday evening that it, the FBI and Austin police had confirmed the connection.

One package Tuesday injured a FedEx worker in Schertz, near San Antonio, when the parcel went off just after midnight, officials said.

A second package, which was found at a FedEx facility near Austin's international airport, was being examined by authorities, the FBI's San Antonio office said in a tweet Tuesday afternoon.

Tuesday's developments are adding to the anxiety in the state capital, where four package bombs and reports of other dubious parcels have Austin in what one US lawmaker from Texas described as "absolute panic."

• A FedEx spokesman, Jim McCluskey, said of the person who sent the package that exploded, "The individual responsible also shipped a second package that has now been secured and turned over to law enforcement."

• The company also gave law enforcement "extensive evidence related to these packages and the individual that shipped them collected from our advanced technology security systems," McCluskey added in a statement.

• The FedEx explosion represents a new method for the bomber or bombers. None of the four previous explosives was shipped, police have said.

• Hansen, the Schertz police chief, said he was confident the package that exploded there was not meant to target that facility or the city, though he wouldn't say why.

• The FBI's Smith declined to answer reporters' questions about whether the package that blew up was destined for Austin. Smith also said he had no reason to believe people in Schertz face any threat.

• There have been more than 1,200 calls about suspicious packages that have come in since March 12, Austin police said.

• Rep. Sheila Jackson Lee asked an FBI acting deputy director for a briefing in Washington on efforts to find the bomb maker. "There is absolute panic in Austin," said Jackson-Lee, who represents Houston.

• President Donald Trump did not comment when asked Tuesday if he thought the bombings were acts of domestic terrorism. Trump called the situation "absolutely disgraceful" and said of those responsible: "We have to find them really immediately."

In Austin, authorities have been combing for clues to the four explosions there, the first three of which involved cardboard packages left in front yards or porches. They weren't delivered by the US Postal Service or services such as UPS or FedEx, police say.

Those three explosions -- one on March 2 and two more on March 12 -- killed or wounded three African-American people and one Hispanic person. The blasts happened in east Austin areas that predominantly have minority residents, and some in the area expressed concern the attacks might have been racially motivated.

Police have not uncovered a motive and have not ruled out the possibility those bombings could be hate crimes.

In the fourth blast, a device Sunday was triggered by a tripwire, injuring two white men, police said. It had been left on the side of a road in a predominantly white area. Those men are in good condition at St. David's South Austin Medical Center, a hospital representative said.

"The use of a tripwire is far less discriminating than leaving parcel bombs at residences and suggests that (Sunday's) victims were not specifically targeted,"the global think tank Stratfor said in one of its Threat Lens reports.

At the Schertz FedEx facility, a package that was moving along an automated conveyor exploded around 12:25 a.m. Tuesday, Schertz Police Chief Michael Hansen said. A worker standing near the explosion suffered minor injuries and was treated and released, officials said.

If one perpetrator is behind all five blasts, then the person deployed an unusually wide range of skills and delivery methods, CNN law enforcement analyst James Gagliano said.

"Some of these folks ... as long as the bombmaker walks away with 10 fingers and 10 toes, that's successful to them," said Gagliano, a retired FBI supervisory special agent.

"But the method, the delivery system and the different means that he's having these things in place shows that he's trying to show -- if it's the same person on all five of these -- a full panoply of different ways of doing this," he added, "and that's frightening."

Three members of the Congressional Black Caucus called Monday for federal officials to classify the bombings as terrorist attacks and determine whether they are "ideologically or racially motivated."

The NAACP called the incidents "acts of domestic terrorism" and called for vigilance and caution for communities in Austin.

'I was pretty scared'

Brian Jaimes, 19, a package handler at the FedEx facility near Austin where investigators were working on a suspicious package, said employees were called to the front office and then told to leave the building.

"I was pretty scared," said Jaimes, who has worked at the facility for four months.

When asked whether the news about the bombings has made him nervous about coming to work, he said: "I try not to think about it, especially since I work (at a package shipper)."

What agencies are involved?

More than 350 special agents assigned by the FBI, as well as Bureau of Alcohol, Tobacco, Firearms and Explosives agents and forensic investigators in Quantico, Virginia, are on the Austin case.

How are they examining the evidence?

"The prior three scenes are already in the lab at Quantico, and the evidence from the scene from last night is on its way to Quantico as well," he told CNN's Anderson Cooper on Monday night.

"They're looking at the devices, they're comparing them, looking for similarities," he said. "The similarities they've seen to this point, lead them to believe -- as we do -- that these are all being constructed by the same person or persons who are responsible for this."

How are they handling the tips?

"As each tip comes in, it gets assigned to either a team of FBI agents, ATF agents or Austin police detectives to do follow-up work on," he said.

Manley urged residents to call police with any information.

"No matter how inconsequential you think it may be, that may be the piece of evidence we need to link it together and solve this before we have someone else in our community that gets seriously injured or killed," he said.

What are police asking residents to do?

Police are appealing to residents to pay attention to their surroundings. Residents shouldn't approach or touch anything that looks suspicious, Manley said.

"We now need the community to have an extra level of vigilance and pay attention to any suspicious device -- whether it be a package or a bag, a backpack -- anything that looks out of place," he said Monday. "Do not approach items like that."